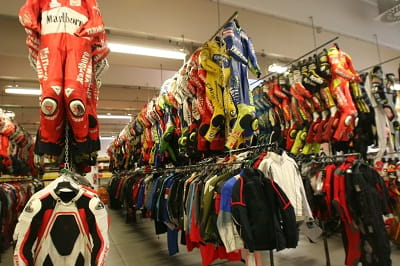 This is a rare peek inside one of the true mecca’s of modern day motorcycling – Dainese’s leathers storeroom. Unfortunately we managed to only grab one slightly blurry snap but thought you'd like to see it.

The locked warehouse at their Vicenza R&D facility in Italy is only opened up  to special guests, and we’ve been lucky enough to be let in a few times. It’s right next door to the technicians who measure up MotoGP gods for their leathers and boots.

Inside the hall is Dainese’s history from the very first suits they made for Barry Sheene up to the latest suits for Valentino Rossi.

Along the way there are the first ever back protectors, boots and gloves, experiments with knee sliders, early helmets and prototype suits that have never seen the day. Add in pretty much any heroic GP and World Superbike rider from 1972 until now and you can see their suits in the museum. So that means everyone from Lawson, Rainey, Agostini, Cadalora and Schwantz for a start through to every one of the suits Rossi has worn since he started in 125s, plus the latest air bag suits the MotoGP riders use.

Even Dainese say it’s hard to put a value on the collection and would never sell it as it’s part of their heritage, in fact, it is there heritage. But if you do ever pass their factory and can convince them to let you in, make sure you take a camera! I for one could spend days in the museum checking out the legendary suits that have made Dainese what it is today.