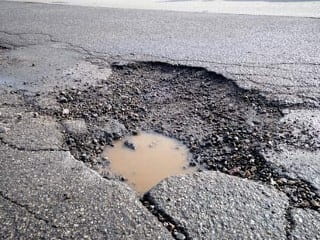 Research into potholes shows that patch repairs could be much more durable if a few simple techniques were consistently adopted.

The initial study - undertaken by Nottingham Trent University and the University of Nottingham - found that the application of a coat of bitumen emulsion between two layers of asphalt in a clean, dry repair, greatly improved its resistance to further cracks.

It was also confirmed that a hot mix repair - in which asphalt is heated to 140°C or more - was the best option for repairing potholes with a depth of more than 2.5 centimetres.

Dr Mujib Rahman, a senior lecturer in civil engineering at Nottingham Trent University's School of Architecture, Design and the Built Environment, said: "The public purse carries a huge burden with the cost of pothole repairs as so many of them have to be repaired again and again.

"It's essential, therefore, that we understand more about how they are created and how they can be repaired in a more efficient and a better way.

"As an initial study, we have found that if a few simple and cost-effective measures are applied with each repair then there may be less need for as many repeat repairs.

"If more research was carried out in this area there could be a great potential for millions of pounds to be saved every year, as not only could the amount of pothole repairs be reduced, but damage caused to motor vehicles could also be avoided."

The study, which was funded by the Institution of Civil Engineers' research and development enabling fund, lasted for six months. Using specialist equipment, it involved two laboratory tests and a field test on a public road in Nottinghamshire.

During the study it was also found that the presence of water accelerated pothole cracks and significantly increased a pothole's permeability.

Dr Nicholas Thom, of the University of Nottingham, said: "This study to some extent confirms what many practitioners will have always thought, but until now virtually no scientific work has been done to prove this. This study holds the promise of transforming general understanding into a usable design approach, based on both experiment and computation.

"The key requirement is a means of predicting the life of different types of repair, allowing informed decisions to be taken by highway authorities, and progress has certainly been made towards this end. The recently completed study will feed into follow-on research at both universities, acting co-operatively, so while we haven't seen the last of the pothole there is hope that it could one day become a rarer sight."

Institution of Civil Engineers vice president, Geoff French, said: "Potholes present an on-going frustration for the public and the colder weather experienced over the past few years as well as heavy rain and flooding, have only exacerbated the situation.

"More preventative maintenance that lasts is needed to ensure our roads are more resilient and this is an approach that is likely to be more cost effective in the long run. We are therefore pleased that this initial study shows the potential for a repair method that could achieve these aims in the future."