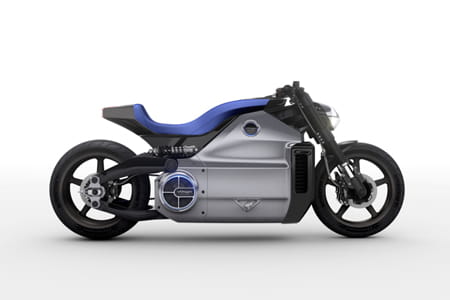 French motorcycle manufacturer Voxan has resurfaced at the recent Paris Motorcycle show with a stunning new machine called the “Wattman”. As the name suggests, it is an electric bike said to be capable of 160kph and reaching 100kph in just 3.4 seconds. The bike is claimed to be the most powerful electric two-wheeler in the world and has a range of 180km on one charge of the 12.8kWh battery, which is capable of returning to an 80% charge state in just half an hour when using a fast charger.

The original company was founded in Issoire in 1995 by Jacques Gardette with backing from the Dassault Group, producing their first prototype bike in 1997. The first production machine called the Roadster appeared in 1999 and a year later they added a Cafe Racer model and then the Scrambler model the following year.

Despite appealing to the French market as a home grown producer using French products, it struggled against the established opposition from around the world. June 2002 saw the company bought out and production of the Street Scrambler model was released, which continued into 2004 when it was joined by the Black Magic version. All the bikes used a 996cc 76-degree V-twin petrol motor.

Despite opening a large number of dealerships and bikes selling reasonably well, in October 2007, Voxan had an initial public offering on Euronext with two companies considering takeover bids.  In 2006 they produced the Charade Racing motorcycle equipped with four valves per cylinder, producing 106 horsepower at 8000rpm. Complete with electronic fuel injection and electric start it seemed to be what customers would want from a sports bike.

However, it failed to gain the interest needed and by the end of 2009, Voxan was forced into liquidation, and eventually became a subsidiary of the Monaco-based Venturi Automobile company. All production ceased at the Voxan facility at Issoire and the engineering staff were relocated to Venturi's headquarters from where an announcement was made in 2010 about Voxan’s new eco-friendly corporate plan, involving the creation of an electric motorcycle by 2013. 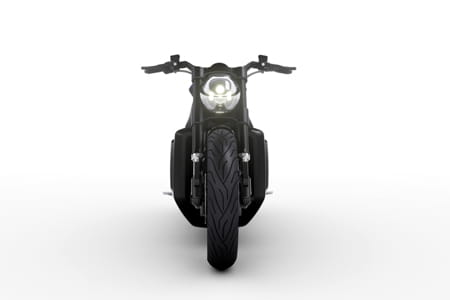 As good as their word, the new 350kg 200Nm torque, 200 bhp equivalent ‘Wattman’ has debuted. It is powered by the first Voxan electric motor with permanent magnets and liquid cooling giving instant torque up to 10,500rpm. Power is transmitted to the Michelin shod 240mm rear wheel by a toothed belt.

The motor and all the ancillaries including the battery  is contained within an aluminum ‘exoskeleton’ chassis which has a new type of parallelogram –shaped four-link (two dual oscillating arms) suspension system which creates an extension of the battery pack at the rear. 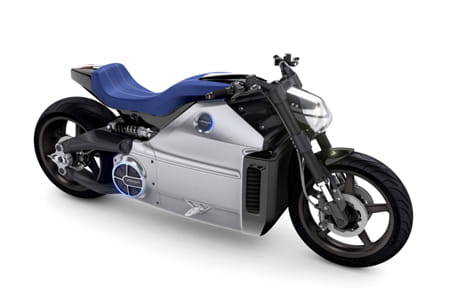 At the front are conventional 43mm inverted forks and the whole machine rolls along on 18” inch wheels shod with the aforementioned Michelin (French) tyres. Braking is taken care of by another French company Beringer thanks to their 4D system at the front which uses four 230mm discs while a single item checks the rear wheels progress. 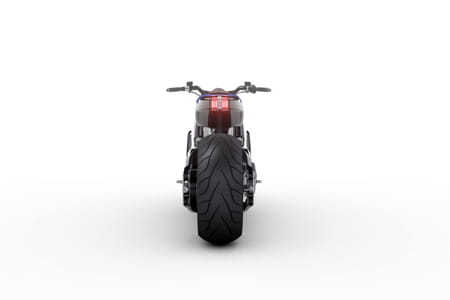 The long machine is over two metres (2,350mm) and is 815mm wide, while the wheelbase is 1705mm. Charging can take place at any domestic socket thanks to the COMBOII socket and the manufacturers are quick to point out that the bike will get its 80% charge quicker than a mobile phone!

It has been designed by Luxembourg based Sacha Lakic who in the past has worked for Yamaha and their subsidiary MBK, as well as Piaggio and Bimota, and he worked on the original Voxan as well as the ‘Black Magic’ version.

But just in case you have got your cheque book at the ready, the new Voxan won’t be available for two more years. No prices have been even hinted at as each model will be built to order – so it is unlikely to be cheap!