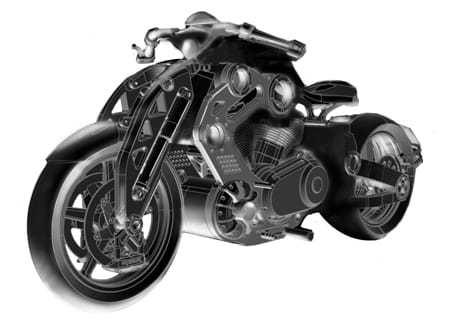 The man responsible for designing a host of Ducati motorcycles including the 999 and Sport Classic raneg has worked his magic on a radical new bike from US-firm Confederate.

South African-born Pierre Terblanche, the former chief of design at Ducati, has joined Confederate as head of design. He has just announced a new machine called the C2P-51 Fighter.

It will be the first bike under his direction. In Confederate's video he states that the company's key signature trends will remain, so expect lots of aluminum, titanium, stainless steel and carbon fibre.

A new billet aluminum crankcase for the traditional V-Twin engine has been created which shaves 40 pounds off the engine's weight. In addition there are new head and barrels and valve covers. He also mentions a new downdraft fuel-injection system that gives more power and improves the ergonomics, although there are no glimpses of the machine other than a sketch showing a ¾ view.

Confederate say production will start next year and only 31 of the new bikes will be built. That makes it even more exclusive than usual, so don’t expect it to be cheap! 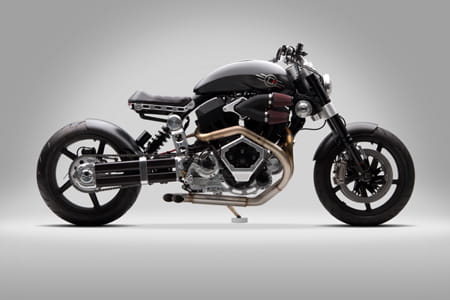 WHO THE HELL ARE CONFEDERATE ANYWAY?

When talking American Motorcycle manufacturers, Confederate Motors Inc. may not immediately jump to mind as a mainstream player.  No surprise really given that the cost of their somewhat exotic street motorcycles means the customer base reads like a Hollywood A-list at a film premiere!

Motorcycle fans Tom Cruise, Brad Pitt, Ryan Reynolds and Nicolas Cage have an example or two sitting in their garage and from the world of music you can add ‘The Boss’ a certain Bruce Springsteen.  Throw in names like David Beckham, a few members of royal families and you get the idea, they are not cheap. Prices start around $45,000 each for one of Confederate's cheaper models, rising to just below $100,000!

But, such prices do not stop mere mortals from aspiring to own one of the rolling works of minimalist art. The company sells all around the world and while I was visiting recently they cofnirmed orders from Brazil, Taiwan, China and many countries in Europe.

The company was founded in 1991 by lawyer H. Matthew Chambers, as an initiative seeking “enlightened design through true American inspiration.” Originally the fledgling company was based in Baton Rouge in Louisiana, before moving to San Francisco, producing their first bike, called the Hellcat.

However, a further move two years later to New Orleans nearly caused the company to become just a name in the ever evolving history book of motorcycle manufacturers.  Bizarrely it was not the bankruptcy in 2001 that did it, because they managed to bounce back from that, instead it was nature in the form of Hurricane Katrina destroying everything – literally!

However, help was at hand in the shape of George Barber the founder and owner of the Barber Motorsports Park in Birmingham, Alabama. Basically he gave them his original museum and workshop located in the city, and it was rent free. Something of a no brainer, the company relocated and once again began production of its unique motorcycles with the launch of the Wraith.

Jaw dropping in looks it was certainly unlike anything ever seen before. Its own designer J.T Nesbitt described it as “a work of kinetic sculpture." The big V-twin engine dominated the view of a bike that appeared to have a different heritage, depending on who was looking at it.