James May to tackle TT course on Meccano bike 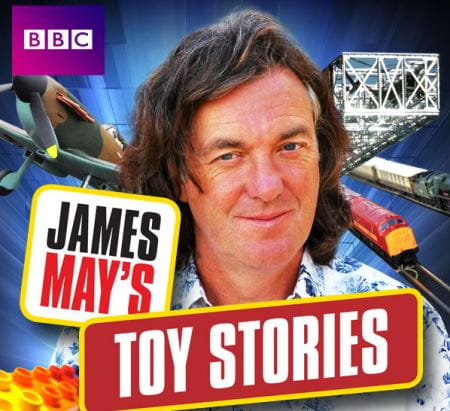 It may only have a top speed of 15mph, but that didn't stop BBC Top Gear presenter James May attempting to ride around the Isle of Man TT on a motorcycle made from Meccano.

During the programme whoch airs this Christmas, May will be seen embarking on a new challenge, as he attempts to ride around the 37.75 mile Mountain TT course on a motorcycle and sidecar built and powered, out of Meccano.

The attempt actually took place during the Isle of Man Grand Prix in August. While the likes of John McGuinness average over 130 mph, May’s outfit had a maximum speed of 15 mph, meaning in theory nearly three days would be needed to cover the Mountain course.

The outfit was built of over 15,000 pieces of Meccano, there being 600 nuts and bolts in each wheel alone. The bike was built and constructed after months of preparation by Toy Stories and Man Lab’s project manager, inventor and engineer Simeon Oakley. The build took nearly 10 weeks to complete and apparently no serious testing had been done prior to the actual attempt!

May is well known for his passion for two wheels and earlier this year he visited the London Motorcycle Museum with a film crew while preparing another programme in the 'James May's Toy Stories' series. May chose the museum due to its ability to provide a complete range of machines to illustrate the development of the motorcycle through the ages, as well as being able to provide some Isle of Man race bikes.

For those who don’t know, in the programme ‘Captain Slow’ takes on life-size challenges with children's toys and he previously used Meccano in the first series when he built a life-size, rolling drawbridge out of the toy.

Meccano was first invented in 1898 by Frank Hornby, originally for his two sons in Liverpool. He went onto develop his system and sold it initially under the brand name "Mechanics Made Easy" in 1901, before patenting it as Meccano in 1907. Main production now comes from the factory in Calais, France.

Sue Barratt, Country Manager, Meccano Toys UK Ltd, said: "This was an amazing challenge for all involved. Our design team worked in collaboration with the Toy Stories engineers to create a fully functioning motorcycle and sidecar that was capable of transporting two grown men around a 37 mile track.”

However, she was reluctant to say whether May succeeded, suggesting people watch the actual programme when it was aired!