Hesketh to launch new model in 2014 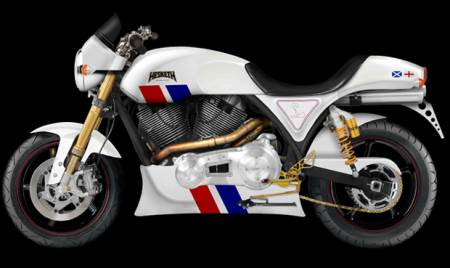 Hesketh Motorcycles was formed in 1980 by the very same Lord Hesketh who had previously operated the Formula One team of the same name and whilst he's no longer involved the company are launching their first new bike since the V1000 in 1983 which will be known as the 'Hesketh 24'.

The original formation of the motorcycle marque was not as successful as his seventies F1 racing team (complete with James Hunt as the driver) and his plans to revive the then failing home industry almost fell at the first hurdle.

Lord Hesketh ceased to have any connection with the company in 1984 and whilst the brand has limped along since it hasn't completely disappeared into the history books. And thankfully so because the firm have announced that a brand new model will be launched in February 2014 bearing the Hesketh name. Called the 'Hesketh 24', it will be the first new model from the company this century and its appearance is very similar to the previous Hesketh motorcycle which in turn used James Hunt’s F1 Grand Prix winning ‘24’ car for its styling.

Despite the classic looks underneath the patriotic red, white and blue bodywork is a completely new machine that while mimicking the original V-twin, now has a much larger version at its heart. Instead of the original one-litre Weslake power-plant, the '24' has a 1950cc, belt driven, 3-cam, 56 degree V-twin engine within its chromoly frame to provide a very acceptable 120bhp.

Drive to the rear wheel is achieved by a six-speed gearbox. Both wheels are in fact 19-inch, a size once so beloved of the British industry in its heyday, although these are Brock's performance BST carbon fibre items as opposed to skinny chromed steel items!

Quality is obviously the name of the game with the new machine as it uses Ohlins suspension (track and road) and French Beringer disc brakes along with a stainless exhaust system. As well as quality, the design has incorporated modern thinking as the 22.7 litre fuel tank is mounted beneath the bike to help with mass centralisation and to alleviate some of the handling-based criticism of the original machines.

It was the original machines that were developed on Hesketh's own stately Easton Neston estate and  despite being the first British bike to offer four-valve heads and twin camshafts it looked similar to the then ageing and ugly 860 Ducati which didn't get it off to the best start. Because it failed to get any outside backing Lord Hesketh formed Hesketh Motorcycles plc. and in 1982 a modern purpose built factory in Daventry was set up to manufacture the ‘V1000’.

It soon became clear that looks were not the only problem. The bikes were heavy and the high riding style did not help matters but more importantly they were unreliable thanks basically to lack of development and manufacturing issues caused by cash flow problems.

As a result of the inevitable bad press, combined with a collapsing UK market, the company went into receivership. Undeterred, Lord Hesketh formed a new company called Hesleydon Ltd in 1983 to manufacture a revamped V1000 which came with a full fairing and was known as the 'Vampire'. However, a fairing did not cover up the previous manufacturing and engine faults and the company folded in 1984.

Since then Mick Broom, the original development engineer and test rider, has kept the brand name alive through his company Broom Development Engineering. As well as keeping the original machines on the road he gradually resolved many of the original problems such as the overheating of the rear cylinder. In addition he built on average 12 new bikes a year.

The steady business flow was deemed insufficient to support the company especially after several moves of premises and Broom tried to sell the brand to a Manchester businessman who wanted to use it on a range of electric scooters instead. Ironically despite the businessman sharing the same surname as Lord Hesketh, he was no relation!

In 2010 Broom entered an arrangement with Paul Sleeman to take over the Hesketh Motorcycle business. Sleeman relocated the business to Kingswood in Surrey and has been producing the ‘Kingswood’ (an updated original machine) since then with the last one being built in July of this year.

Now the company is set on a new course, with the release of the ‘24’ next year showing a new direction of the brand. Sleeman said: “The design of the bike itself is centred around the big V-twin muscle at the heart of the bike, with overhead air intakes inside the tank above and a 22.7 litre fuel cell mounted below the engine. To stay true to some original Hesketh features the front light offers a modern half cowl and the top tank follows the distinctive Hesketh shape.

"The Hesketh 24 is a nod to the F1 success of James Hunt and the Hesketh Racing team and we tried to incorporate this is in subtle touches, such as the small Scottish and English flags on the tail as seen on the original F1 24 car and the outline of the Zandvoort circuit that offered Hunt the famous 1975 victory.

The limited edition Hesketh 24, of which only 24 will be made, is available from February and we will go on to develop and release a 2 seat version of this model shortly after.”

To cater for the production Hesketh Motorcycles will soon be moving again.  This time from their current home in Kingswood to larger premises in Redhill, Surrey allowing the team to concentrate on the manufacture of the Hesketh 24 and further models.