A British-based team are set to challenge for an Electric Drag Bike World Record for a standing ¼ mile which is currently held by an American by the name of Larry ‘Spiderman’ McBride who took just 6.94s and crossed the line at 201.37mph. 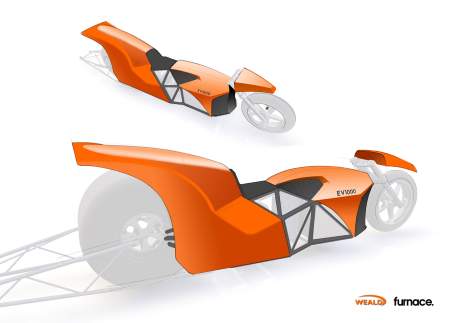 The EV1000 project is spearheaded and financially backed by Phil Edwards of Weald Technology who are conveniently already in the field of design and manufacturing for the zero-emission motorsport sector.  Edwards has history in electric drag-bike racing at national level in 2010/11 having set the then record of 14.124 seconds.  Piloting the drag-bike will be Rob Moon, 2013 NBC (No Budget Cup) 600+ Champion, who doubles up as the Lead Chassis Designer for the project.

Bike Social caught up with Edwards who talked us through the design, “The bike is essentially a top-fuel drag bike type chassis and running gear. It’s bespoke design because a giant pack of capacitors and a big electric motor don’t fit where a Suzuki or Kawasaki engine would have gone, but it’s based on their rules and regulations. That simplifies things as they run similar horsepower (about 1,000) so all the running gear is readily available.” 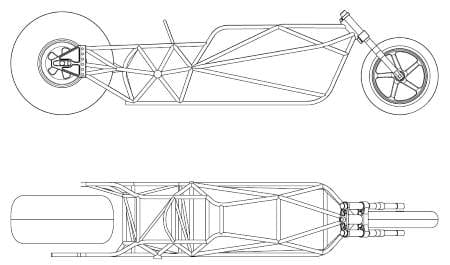 The £350,000 Project EV1000 has been supported by Suzuki Motorcycles GB who have donated the complete front end from a GSX-R1000.  The team also have an ex-Benetton, Williams, Jordan, Reynard and March chassis fabricator working on the chassis which will be ready by the middle of next year and could be on display at a bike show near you.  The motor will be designed, bench tested and in place by the end of 2014 and by spring 2015 the team will begin full testing.

“The bike will be powered by Ultracapacitors rather than batteries, as they’re able dump ALL their energy down to Zero volts in a second, and we can regenerate a load of energy back into them once we’ve passed the timing gantry after ¼ mile. We’re getting technical support from Advanced Power Components (APC) for the Ultracaps”, continued Edwards.

The aim of the exercise is not only to go for a World Record but also, in Edwards’ words, “to showcase UK engineering and technology, reminding everyone that we are the best in the world at this stuff, and take the bike to schools an science fairs, and inspire the next generation of kids to consider a STEM career (Science, Technology, Engineering, Mathematics).”