Parrish and Mamola to ride in Sheene tribute parade

Barry Sheene passed away 10 years ago last March, taken by cancer at just 53, and to mark the anniversary Steve Parrish and Randy Mamola are amongst those taking part in a Tribute Parade at Silverstone on MotoGP race day. 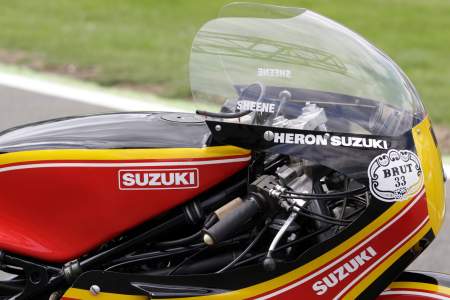 The 1979 British Grand Prix saw an epic dual between Sheene and Kenny Roberts and Barry’s bike, the Factory Suzuki XR27 which is now owned by classic motorcycle collector Steve Wheatman, will be one of four ex-Sheene race bikes in the parade:

Also taking part is the 1980 Kenny Roberts Yamaha OW48R, on which he clinched his last World Championship but the bike will carry the 1979 livery to commemorate the great battle he had with Sheene at Silverstone.

The parade takes place between the Moto2 and MotoGP races at approximately 12.20pm.  Barry’s son Freddie, his brother-in-law Paul Smart, an ex-Grand Prix racer, and his nephew Scott Smart, who is currently riding in British Supersport, will all take part in the parade alongside Barry’s former teammate Steve Parrish and on-track rival Randy Mamola, who will be riding his original 1980 Factory Suzuki XR34M1. 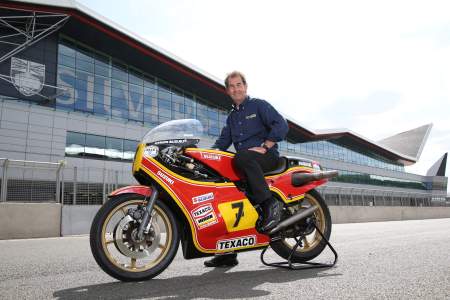 Parrish was the double World Champion’s teammate in 1977 and 1979, and was one of his closest friends, he said: “The tribute to Barry will be a fantastic spectacle and will mean a great deal to the fans coming along to the British Grand Prix. There will be a lot of fans of my generation who remember Barry Sheene, as well as younger fans who, while they wouldn’t have seen Barry race, will have heard a great deal about him. I think it’s a wonderful tribute; obviously he was the last British premier class champion, but it will also mean a great deal to me - I’ll be very proud out there, riding a bike that he last raced here in ’79, in that epic encounter with Kenny Roberts.

“A lot of people will love seeing his bikes going around; it will evoke a lot of great memories. His son Freddie will also be riding and I’m sure Barry will be looking down on him, telling Freddie to go past me – and he should do, he’s a lot younger than me. We’ll also have Paul Smart and Scott Smart riding, so it will be a lovely tribute to the great, great Barry Sheene, who I miss on a daily basis. Hopefully people will put up a big cheer as we go around and help celebrate the life and achievements of a wonderful man.”