In September 2014 James Toseland will pilot a bike on the Bonneville Salt Flats of Utah in the USA as an all-British team attempts to bring back the title of World’s Fastest Man on Two Wheels to the UK.  The double World Superbike Champion retired from world championship level competition in September 2011 due to a wrist injury sustained during a testing accident earlier that year but in a bid to return to global competition he’ll be on board a bike that on paper can achieve speeds in excess of 500mph. 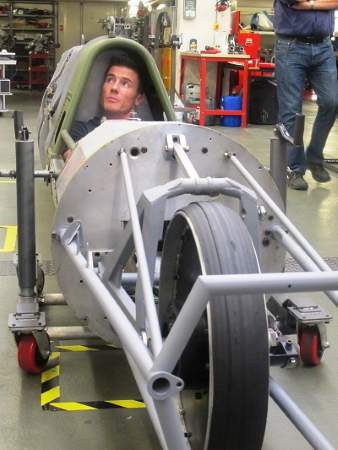 The project was first revealed by Bike Social in December and during an interview this week with Toseland he appeared both calm and remarkably confident about the team’s chances beginning with how he became involved.

Project Manager Robin Richardson and the bike’s builder Alex Macfadzean initially contacted James’s manager Roger Burnett after their life-long ambition came to halt with a lack of funding available to complete the project.  James’s profile and ability was recognised as the route to attracting sponsors.

“One of them (Robin or Alex) was going to ride.  When we had a meeting to discuss I needed to make sure of the team before I agreed.  I wanted to know that they were serious so I made the decision as soon as I saw an outline of the work they were putting into the project and how safe it is.  Knowing that the right team is behind you is just like racing.”

The wrist injury that James sustained is so severe that he has no movement in the joint at all and this is something he has to take into account when training for the land speed record attempt.

“I can’t ride a motorcycle in anger anymore which was something that I enjoyed so much.  This project gives me an opportunity to achieve a world record, a word level achievement, that’s what did it for me.  I can’t challenge for world titles anymore.

I’m concentrating on keeping the strength in my arm.  The forearm is difficult because of the lack of bend with my wrist.  The throttle is on right foot but I still need the strength to hold onto the motorcycle-style handlebars.”, he said.

The record stands at 376.363mph and has done since 2010 – current holder American, Rocky Robinson, and the previous incumbent, compatriot Chris Carr, have traded places at the top over the previous four years and it’s the American’s who have already begun some healthy banter.  James has plenty of confidence in the bikes potential stating that “on paper it should be able to do 550mph” which gives the University of Derby-based team the ideal opportunity to bring back the title and keep it.

“The American’s are saying we won’t be able to do it but the engine produces over 1,000bhp so we have to make sure the grip and stability is right as we build up speed over the first five miles, then it’s the sixth mile that’s timed before we refuel and then are re-timed on the return.

If I go over to America and bring the title of Fastest Man on Two Wheels back to the UK I’d be really proud.  If we smash it then it pushes the cost of others trying up even more.”

The bike is known as the ’52 Express’ named after the race number Toseland used throughout his career and was on display for its first public outing at the recent Goodwood Festival of Speed but James believes that in the UK, the Land Speed Record is an unknown entity.  He said, “there’s a bit of a mystery about it all in the UK but when the project gets into full speed we can really push on the PR front and get the message across.”

“The speed doesn’t scare me. I’m excited about the prospect of achieving 400-500mph.  The most important thing is the stability; the quality of the build, aerodynamics and weight transfer across the bike to keep it stable.  We can’t spend all this money and not achieve it.  We’re all in the right frame of mind.” he assured us.

Testing begins in May 2014 and to read more about the bike, its tyres and aerodynamics package then click here. 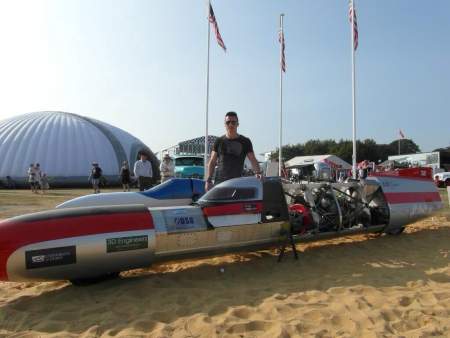