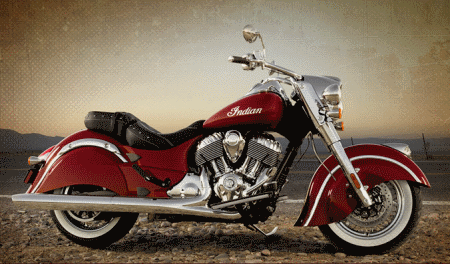 The wait is finally over and three brand new Indian motorcycles were publically launched in the USA on Saturday evening. Featuring the brand new, but traditional American V-twin engine, the Thunderstroke 111, all have many historical Indian styling features including the famous ‘War bonnet’ emblem mounted on their front fender (mudguard) despite being designed for today’s roads.

It is no secret that the Polaris owned company is targeting the traditional Harley Davidson market with the new machines, leaving their other brand Victory to continue on the more modern path to attract new riders to the cruiser market. To make this targeting even clearer, the launch was made at the massive Sturgis Rally in South Dakota, traditionally seen as almost a Harley rally for the past few years, despite it originally having been started by an Indian owners club in 1938. 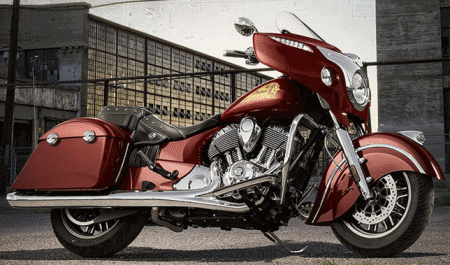 Indian who were of course one of the oldest US brands having been founded in 1901, became one of the ‘big three’ left after the twenties depression (Harley and Excelsior being the others), but eventually they followed Excelsior  into the history books in the 1950’s leaving Harley a clear path at home sales.

Since then there have been numerous attempts (9) to revive the brand, but this latest attempt by Polaris who acquired the rights to the Indian name, trademarks and bikes two years ago looks like being successful thanks to their massive financial reserves, something previous owners have never had .

Coupled with this is the fact the company has the engineering know-how, hence the all-new engine, styling and marketing expertise which has turned Victory into a well-known brand from nothing over the last fifteen years.

In the past revival attempts have relied on using propriety engines like the S&S powerplant, which has led many true Indian enthusiasts to claim they were just custom bikes and not true Indian motorcycles. (Polaris has made it clear there will be no crossover between the two brands.)

Looking at the pictures of the new bikes it seems to that the Minneapolis based company have managed to tread the fine line between producing an all-new motorcycle fit for purpose in the 21st century, while still honouring the Indian trademark design cues like the ‘War Bonnet’ emblem without the bikes becoming just pastiches of classic old bikes. 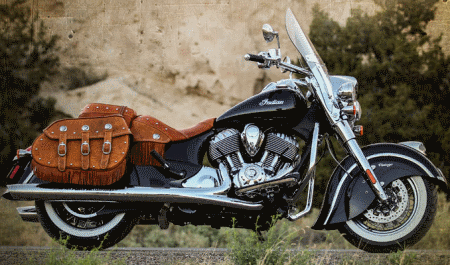 It certainly seems they have managed to do this and create three distinct bikes to appeal to a wider audience. All are powered by the 49 degree air-cooled V-twin (1811cc) that produces 119 foot pounds of torque.

A six-speed box  powers the rear belt transmission and the company claim that the motor has done the equivalent of over 2 million test miles to ensure it’s robust as well as fast and torquey, while giving around 40 to the gallon.

To try and woo the Harley (and other) riders, the company are offering a one-year unlimited warranty and four years of extended service, along with a trade-in assurance of  70 percent of its original value after two years, 60 percent after three years in the USA.