Steve McQueen board tracker for sale: 100mph and no brakes 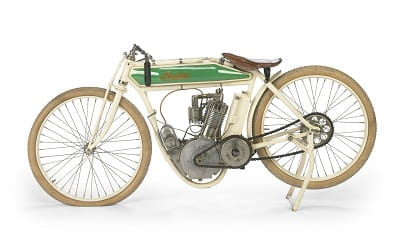 A board track race bike owned by actor and bike nut Steve McQueen is up for auction at the International Classic MotorCycle Show in Stafford, UK, on Sunday 28th April.

Bikes like this Indian Model F had no clutch, throttle or brakes, and were push-started and run flat-out. On their day, they could reach speeds of up to 100mph. At the end of the race the rider shorted-out the magneto to stall the engine and cruise to a halt. Madness.

This one was fully restored, and the 4hp machine was purchased by its current owner at a Bonhams auction in Carmel, California, USA, in May 2010, and has since been housed in his private collection.

Ben Walker, Head of Bonhams motorcycle department, said: “The men who raced these early board-track motorcycles were not only pioneers and champions of early motor racing but must also have been incredibly brave. In this age of health and safety the idea of riding at up to 100mph with no helmet or protective clothing, knowing you have no way of stopping in a hurry, is a terrifying thought – but this is what they did.”

The Bonhams Spring Stafford Sale will offer a total of 242 motorcycles, with many coming from private collections.