Those magic makers at Spirit of the Seventies, famous for turning ordinary bikes into works of art, have turned their hand to another Kawasaki!

The Kent-based firm is perhaps most famous with UK bikers for its Kawasaki W800 flat-tracker which was built for Kawasaki UK to display at Motorcycle Live at the NEC last year. But the firm has built dozens of flat trackers, customs and retro bikes over the years and is gaining massive credibility in the UK bike building scene. 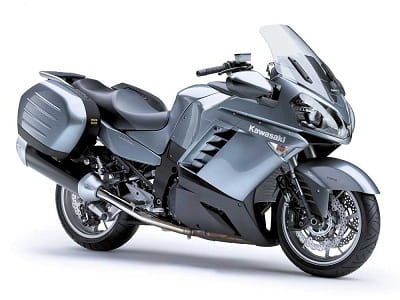 This time, they’ve chosen another Kawasaki, a massive Kawasaki GTR1400 tourer, stripped back the fairing and turned it into a monster cruiser!

Kevin Taggart from Spirit of the Seventies said: "I was scouring the net for reference imagery of naked bikes, I came across an image of a naked GTR1400 with its massive monocoque frame, top-mounted velocity stacks and incredibly manly shaft drive system. Oofff. Hey, I thought, that could easily be adapted to become Kawa's Diavel. So, I had a go and there it was.

He added: "The fact is I'd like one, and seemingly so do a lot of others who've see it, which seems to suggest there's a sizeable gap in the market for big capacity muscle-cruiser-cafe-hotrod-nakeds and they could sell in numbers. I know Ducati and now BMW are in on it, but the Japanese are seemingly too busy knocking out lame adventure bikes to notice."

You never know, pressure from Bike Social may even tempt Kawasaki into giving Spirit of the Seventies a bike so they can build the GTR for real!