Biaggi's back and this time he's on a Kawasaki! 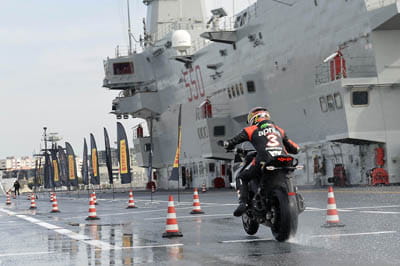 Five-times World Champion Max Biaggi came out of retirement yesterday by testing Pirelli's new Angel GT sports touring tyre on a Kawasaki on the flight deck of an Italian War Ship! Bike Social was there to witness it!

Biaggi, who retired at the end of last season from his factory ride with Aprilia in World Superbikes, is now a free agent who can ride any make of bike, so he had no qualms about getting on board a Kawasaki Z1000SX for Pirelli.

The Italian tyre giant took a fleet of bike testers and journalists to Italy for the launch of their new Angel GT sports touring tyre, including Bike Social’s Marc Potter.

Potter witnessed Biaggi lining up on the Carvour aircraft carrier, which was docked in the town of Taranto. Biaggi then did a 60mph run on the ship’s landing strip, soaked with water for a wet weather brake test, slammed on the ABS brakes and came to a sharp stop.

Potter said: “Pirelli wanted to prove how their tyres worked well in the wet and got Biaggi to do the first run. To be honest, the surface of the ship’s aircraft deck is so grippy I’m not sure it would make any difference wet or dry, but it was great to be part of. If it wasn’t random enough being on a War ship in Italy on a Monday afternoon already, watching Biaggi do the run on a Kawasaki while myself and some other journalists watched from up high in the commander’s tower just made it even more surreal.” 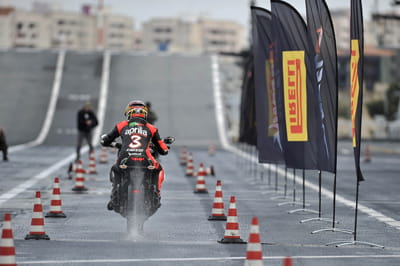 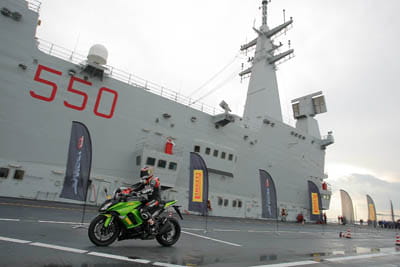