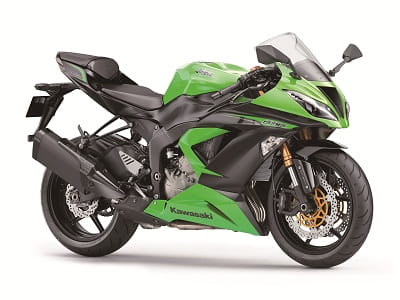 This is the new 636cc Kawasaki ZX-6R and what appears to be the most radical supersport bike yet.

It’s designed to be the most radical supersport 600 motorcycle ever built, and looking at the specs of the new Kawasaki we’d have to agree.

But, this appears to be just the beginning for the 2013 Kawasaki supersport range. We have it on good authority that a smaller capacity 599cc version called the ZX-6RR will be launched in October.

But let's deal with what we have in front of us now - a 636cc ZX-6R that is the first production supersport class bike to use traction control.

It comes equipped with a slipper clutch that’s reported to be incredibly light at the lever but with good feel. And it’s reported to be one of the best slipper clutches fitted to any production motorcycle. For those of you new to this, the slipper clutch prevents the rear wheel locking up under high stress conditions like fast down changes on the racetrack., or if you're being a bit ham-fisted on the road.

The new engine also has two-way engine mapping which allows the rider to switch between different power maps, though full details of exactly what kind of power the bike makes in these modes hasn’t been released.

The current 2012 599cc ZX-6R makes a claimed 126.3bhp and that’s before the bike’s Ram-Air system comes into play. An educated guess would say that Kawasaki must have had 130bhp as their horsepower target, but with improved torque thanks to the 37cc bigger capacity.

Along with styling based on the current ZX-10R and a chassis which appears to be a smaller version of the one fitted to the bigger bike, we can’t wait to get our hands on this bike.

Kawasaki will reveal prices and more specs of this bike, and hopefully pull the covers off the rumnoured ZX-6RR version at the Cologne Show in the first week of October.

Rumours suggest that Honda will also launch a new CBR600RR on the same day of the Cologne Show, so it looks like the 600cc supersport class is hotting up once again.