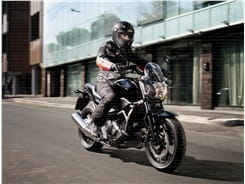 Like the NC range, the bikes will be easy to ride and designed to be comfortable as tourers and commuters. Also, expect to see a twist 'n' go and geared version of the new bikes.

Speaking at a Honda worldwide conference in Tokyo on Friday, Honda CEO Takanobu Ito said: “In the area of large-sized motorcycles, following the New Mid Series, Honda will introduce a series of large-sized models with a new concept, which enable customers to more easily enjoy daily commuting and weekend touring. This stylish new series will be equipped with a 'torqueful' engine, low seat height which increases the ease of handling, and a comfortable ride with high stability in manouvering."

Ito revealed the bikes will go into production at in February 2013 at Kumamoto Factory, Honda’s global motorcycle production operation, and sales will begin from North America.

Both bikes are expected to be revealed at the Intermot Show in Cologne on October 2.