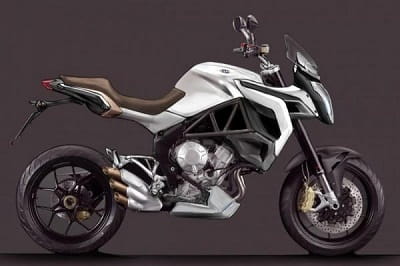 MV Agusta are back with a bang and a new three-cylinder Ducati Multistrada style bike powered by a new 800cc triple motor.

The new bike, believed to be called the Rivale, will be shown in Milan on November 13, and this image of what the finished bike will look like shows a cross between an adventure bike and a supermotard. Think Ducati Hypermotard, crossed with Ducati Multistrada.

The bike has the trademark sit-up-and-beg riding style, long travel suspension and trademark MV three exhausts exiting from the right-hand side.

The bike is fully-finished but only this illustration has been leaked to us. We’ll have to wait another two weeks to see the new Rivale in its finished metal form.

The three-cylinder motor is a big-bore version of the 675 triple currently used in the F3 and is part of MV’s plan to strengthen the brand with a host of new models over the next two years, using the 800cc lump as a starting point.

MV Agusta are planning a big comeback by populating bikes in all the big market sectors and expanding their range twofold.

In January 2013 production begins of the 800cc version of a new naked Brutale three-cylinder using the same engine as the bike shown here.

Insiders say the factory is also planning to build a cruiser-style muscle bike called the Gran Turismo in a similar style to the Ducati Diavel at the end of 2013. That bike is expected to use a four-cylinder motor from the F4 range.

Further down the line MV Agusta are believed to be planning the return of a small 800cc adventure bike which may use the name ‘Elefant’ previously used on the Cagiva’s of the eighties and nineties. It will be designed to go head-to-head with Triumph's Tiger 800.

MV Agusta’s owners have the rights to the Elefant name and are keen to see it used again, especially with the growth worldwide of the adventure bike class.