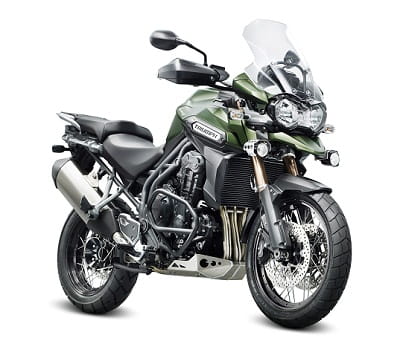 One of Triumph’s top development riders told me months ago they wanted to launch the Explorer with wire wheels when they first unveiled the bike last year, but at the point of development no suppliers were capable of building a spoke wheel strong enough to cope with the bike’s power. But it is now possible.

The bike uses an 18-inch front wheel and a 17-inch rear wheel, the same sizes as the standard 1200 Explorer. Plus, the XC comes in a natty Army-spec, Steve McQueen replica-esque Green which in our eyes really finishes the bike off, giving it the toughness it was missing slightly.

Everything else, including the bike’s brilliant 135bhp, 1215cc triple motor stay the same, so that means you get cruise control, adjustable seat, adjustable screen and that all-conquering riding position.