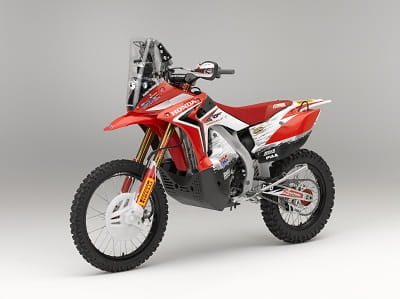 When Honda say they’ve built a bike to win the Dakar we better sit up and take notice.

Okay, so we know the new CFR450X-based machine is a Rallye blaster that we’re never going to get to ride, but we couldn’t help be impressed by the hardness and purpose of Honda’s new HRC pure-bred Dakar contender. The bike was unveiled last week at the Cologne Show. And what they develop in the desert will eventually feed down to us mere mortals.

The Dakar (now held in South America) has been off the radar for a few years with the Japanese manufacturers taking a slight backseat while KTM ran away with the glory, but with Yamaha and Honda both back in 2012 with factory teams and brand new bikes, it looks like the Japanese are going head-to-head once again.

No surprise as the Adventure bike market has become a global phenomenon worldwide and winning the Dakar will definitely lead to sales of Yamaha Super Tenere’s and Honda Crosstourers in the eyes of the bike manufacturers.

Honda have made no bones about entering the Dakar to win, and the Morocco Rally, which kicks off on October 14 is the first chance for them to make their intentions clear.

They’re certainly not messing, with this new bike being developed by HRC (Honda Racing Corporation) have hired Helder Rodriguez, last year’s Rally of Morocco winner and 3rd placed man at the Dakar. And to help him they’ve got Brazilian Felipe Zanol, 10th place finisher at the Dakar and a man even the legendary Dakar winner Marc Como fears.