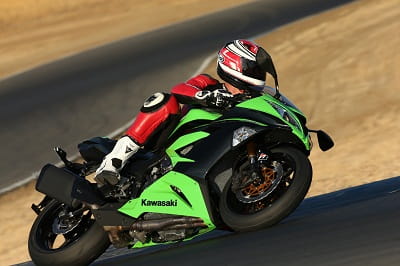 Kawasaki’s latest Ninja ZX-6R is high-revving, hard-charging, ZX-10R-lookalike proof that rumours of the middleweight super-sports class’s death are exaggerated. After two days spent riding the new Ninja at the Thunderhill Park circuit and on the superb roads of northern California at the bike's world launch, I reckon that’s a very good thing.

One reason middleweight race-reps haven’t been selling is that many riders regard them as revvy and uncomfortable. Kawasaki have answered this in several ways, starting by reviving their old 636cc capacity. The new, longer-stoke engine has slightly more torque and power throughout the range, to a claimed max of 135bhp. Civilising features include two power modes, KTRC traction control and a lighter clutch.

Kawasaki’s chassis changes are aimed at improving comfort and usability as much as performance. The ZX-6R gets a longer and softer rear shock with a more progressive linkage, plus a new “separate function” version of Showa’s Big Piston forks, with preload adjustment on the left leg and damping on the right. Brakes are upgraded with bigger 310mm discs, Nissin monobloc calipers and optional KIBS anti-lock. 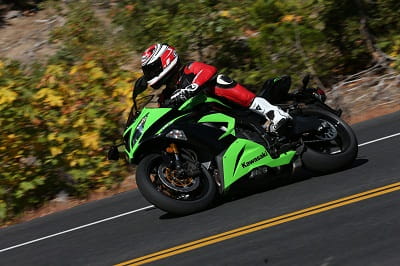 New bodywork means this ZX-6R looks more like the ZX-10R, and goes a bit more like it too. I wouldn’t claim the extra 37cc or three horsepower were noticeable as the green meanie ripped round the hilly track, its tacho needle flicking towards the 16,000rpm red-line. But it sure was fast and fun to ride — and brilliantly agile too. With suspension firmed for the track I can’t recall a bike that steered so quickly, yet the Kawa kept its composure despite not having a steering damper. 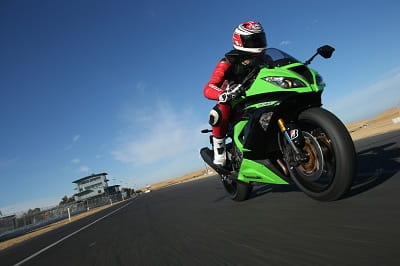 Back on standard suspension settings next day, it was the ZX-6R’s comfort that made most impression as it glided over bumps with an improbably plush ride. It’s still a full-on sports bike with an aggressive (and non-adjustable) riding position, but despite being tall I didn’t find it cramped. And although you need 8000rpm on the tacho for serious acceleration, there was enough low-rev torque to make it easy to ride.

At £8999 for the standard model (£9999 with ABS) the ZX-6R is not cheap, but it has the style, features and most of the performance of a bigger sports bike for less money. Kawasaki’s oversized contender certainly looks good enough to outclass its 600cc Japanese rivals — and maybe to start a revival of the class.