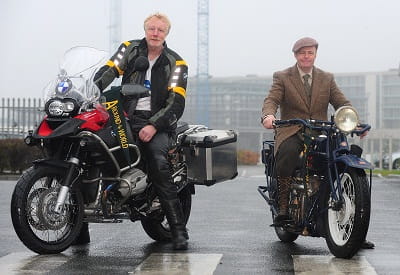 Two modern-day adventurers are about to set off on an 18,000-mile round the world trip to celebrate the achievements of the first man ever to ride round the world on a motorcycle back in 1912.

Journalist and author Geoff Hill, and former road racer Gary Walker have set-off from Dublin on the momentous trip to replicate the adventure undertaken by pioneering Irish-American writer, and silent film director, Carl Stearns Clancy in 1912-1913.

Clancy was the first person ever to ride around the world on a motorcycle and did it wearing just a three-piece tweed suit and a cloth cap on a 7 horsepower bike.

Travelling over from the USA on a steam liner, Clancy and his travelling companion Walter Storey departed from Dublin on a brand-new pair of Henderson motorcycles, setting off for mainland Europe.

After his bike was hit by a tram in Dublin, Storey was forced to travel pillion astride the petrol tank of Clancy's bike through a rain-sodden England and northern France. On reaching Paris Storey had had enough and gave up on his dream to see the world by bike. Undeterred, Clancy continued on into the unknown, travelling alone through Western Europe, North Africa, Asia, and the Far East before crossing the United States west to east, finishing at his home in New York.

Geoff Hill, 56, who is leading the adventuring pair on BMW R1200GS Adventures said: "Today we are setting off on a very momentous occasion, marking exactly one century to the day that the very first motorcyclists set off to ride around the world.

The R1200GS Adventures that BMW Motorrad have supplied are hands down the best choice for a round-the-world tour. They are such a contrast to the incredible hundred-year-old Henderson motorcycle which we have here today.

“To think that Mr Clancy set off on a cold, wet day like today is rather humbling. Gary and I are very lucky to be able to follow in his footsteps and, indeed, with his very own boots. We like to think that he'd approve of our adventure."

Clancy's tour is made all the more incredible by the fact that his 934cc Henderson motorcycle (similar to the one pictured here), was then the fastest and most advanced in the world, it made just 7bhp compared to the 100+bhp of the modern-day BMWs the pair are using.

The 1912 Classic boasted a top speed of around 70mph, had one gear and no front brakes, and Clancy was clothed in only a tweed three-piece suit and cloth cap.