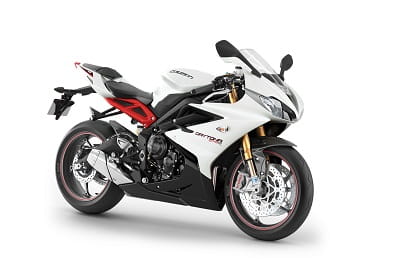 This is the new Triumph Daytona 675R which gets a new chassis, swingarm, engine and styling for 2013.

The new 675R and 675 Daytona are ground-up new models for 2013 and were revealed today at the Milan bike show. They get a new higher-power three-cylinder engine up by 2ps to 128ps, more torque and an increased 14,400rpm redline.

Both bikes are 1.5kg lighter, have a switchable ABS system with track mode, a slipper clutch and a quickshifter as standard on the R version. And in the styling stakes they look, well, shall we say a little more Japanese to us.

The key change to the engine is a wider bore and shorter stroke dimensions, allowing a higher 14,400rpm limit to gain more power and a broader spread of usable revs.

On the intake side are new twin injectors per cylinder and titanium valves are fitted for the first time. The air intake system has been moved to the headstock and in true to form Triumph style, the noise and snarl of the airbox roar is increased where the rider sits. 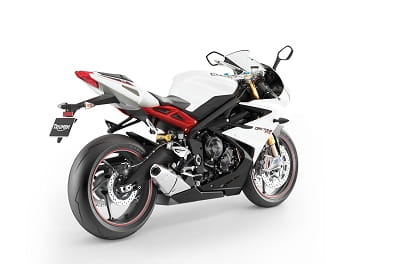 The side-mounted exhaust replaces the underseat exhaust and helps centralise the bike’s mass, improving handling and centre of gravity.

As well as incorporating the new, innovative intake duct, the frame uses fewer sections in its construction for a cleaner, stronger design and has sharper geometry and a shorter wheelbase to make full use of the revised weight distribution. The rear subframe, constructed from high pressure die cast aluminium contributes to the slim design at the rear of the bike.