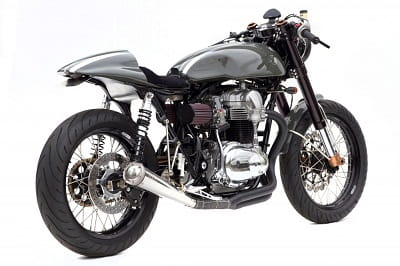 Custom firm Deus Ex Machina has just released pictures of this neat little take on a Kawasaki W650 flat tracker, but bored out to 800cc.

The bike, called the Moto Grigio, is named after an old Ferrari paint called Grigio Scuro, which means dark grey when translated into English. It’s the latest bike from their American shop and fall in line with the massive retro scene taking over in the UK, America, Japan and Australia right now.

There's a host of small custom shops popping up in the UK and we have it on good authority that one Charley Boorman is looking to open his own Deus-style shop in the UK as soon as he finds the right premises. But for now, let's get back to the new Deus.

The Deus Moto Grigio started life as a Kawasaki W650 but was bored out to 800cc, and features a combination of new versus old. The tank is shaped like a classic TT racer and the seat unit is modelled like a current Moto2 bike.

At the rear, there’s a massive Grimeca caliper and Brembo master cylinder with six-piston Beringer calipers up front linked to a Brembo disc.

The bike features black anodised detailing throughout, including the forks, and the black handmade downpipes linked to a Supertrapp exhaust.

No price has been set, but it’s fair to say that we want one. Dear Santa...