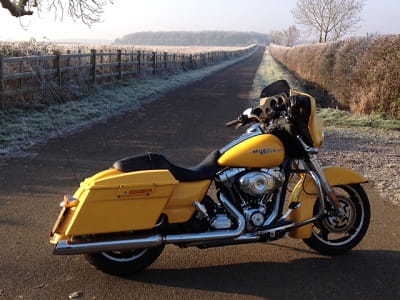 Say the word Harley-Davidson and it generates images of the Pacific Coast Highway in California and the smell of sea spray from the rolling Atlantic waves breaking on the beach. So what the hell am I doing riding a bright yellow Street Glide regularly in -5 Celcius on a roads that look more like farm tracks in East Northamptonshire?

It’s early on a Sunday morning, but we wanted to prove that Harleys aren’t just for poseurs, that they can actually be ridden in the real world and that shiny chrome doesn’t necessarily have to mean your riding fun has to end in July.

So, covered in a suitable winter spray we found at the back of the garage and doused in as much WD40 we could cover the old girl in before we hit the salt-soaked pot hole lanes that are claimed to be roads near my house, we headed off for the bike’s first job - Rutland HOG Chapter’s annual Toy Run.

Loaded with Bennetts-supplied Teddy’s and a Father Christmas beard stuck to my helmet the first job was to select the tunes for the journey. This is a Christmas charity toy run after all so the Prodigy won’t quite cut it.

The Street Glide is essentially a stripped-down Electra Glide for the bagger generation. And that means you get a big comfortable seat, the same mile-eating spread out riding position with vibration-damping footboards, kicked-back bars, a cut-down tinted screen, and a nose fairing full of quality dials showing fuel, oil pressure, oil and air temperature.

There’s a CD player too, which also doubles up as somewhere to plug in your iPod or other generic MP3 player. 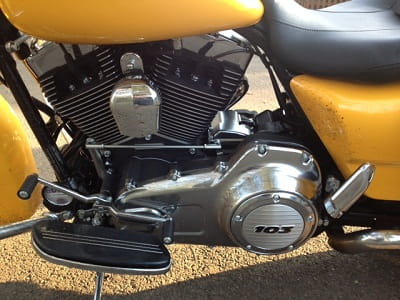 The 103 cubic inch (that's 1690cc in English) motor is a beauty and one of the best-looking cruiser engines you’d ever want to look at, even covered in anti-winter corrosion spray. The finish of the bike is amazing, everything shouts quality, engineering and good old solid Harley-Davidson. Fire it up and the bike has that classic throb as the 1690cc motor thrums into life.

Even on standard pipes the trademark Harley ‘Potato-potato’ throb is easily recognisable, as is the clunk of the gearbox. This is some real American Iron, boy, make no mistake.

Despite weighing 355kg dry and feeling like you need the help of a small family to push it out of your garage, once on the move the bike settles in to a nice rhythm and you lose the low-slung weight disappears.

Click your brain into Harley mode and riding a big 1690cc V-twin is one of the most pleasant experiences you could ever have on a motorcycle. The world takes on a different pace of life, grandma’s smile, children wave, and that’s not just because I’m wearing a Father Christmas beard. Life is really like that on a Harley, unlike any of the thousands of bikes I’ve tested in the past, people love Harleys, young, old or middle-aged. 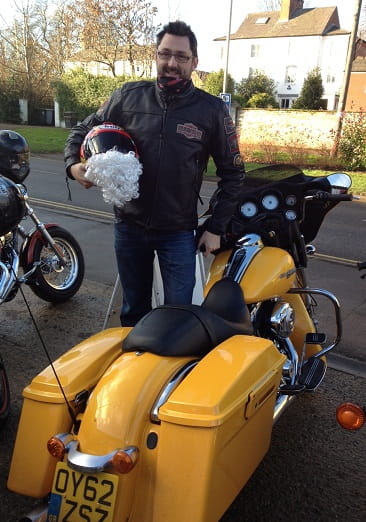 The bright yellow paint scheme on our test bike from Harley-Davidson UK might mean it’s a little embarrassing at the toy run at Rutland Harley-Davidson, but put that aside and in black this is a mean-looking mother. In yellow sadly it doesn’t have quite the same effect.

The winter grime-laded roads may trouble a more powerful bike but on the Harley it barely makes any difference. You have to take your time cornering with footboards anyway. But unlike Harleys of old, or even a few years ago, when it’s dry, this one goes round corners without any of the buck and weave from a couple of years ago.

There’s ABS as standard too which works as it should and pull the big old girl up as fast as you ever need with no dramas. But riding Harleys isn’t about rushing, it’s about covering miles in comfort and at that it’s very good indeed. 70mph comes at a lazy 2500rpm and with sixth as an overdrive, and 98.8ft-lb of torque beneath you there’s plenty of low-revving stomp to overtake if required.

The toy run is lead by the Police and with almost 100 bikes means we never get above about 50mph but unlike all the other sports bike riders there’s no stress on this rider, I just crank the Christmas tunes up and kick back until we reach our destination. Engage cruise control, and well, cruise.

On commuting duty during the week the bike is the motorcycle equivalent of riding naked. It gets that much attention. But it’s practical too. The ‘Bat Wing’ fairing and smoked cut-down Electra-Glide screen does a reasonable job if you’re shorter than me (six foot four), and the motor takes the chill off your legs round town.

The hard plastic panniers are designed as much for style as practicality but will hold a small bag, or a laptop bag for the commute to the office if sir desires, and the pillion seat is more of a styling exercise than a practical option as it’s slanted backwards meaning pillions want to slip off.

But that aside, and the fact that covering it in grime isn’t what a Harley should really be used for, the Harley copes admirably in the cut and thrust of the real world. It’s not meant to be a commuter, but having done thousands of miles in the USA on big HOGs over the years I know they’re really capable mile-munchers, not just pose machines.

The Street Glide is one of the best-looking bikes in Harley’s range yet offers all the practicality of a CBF500 on the day-to-day grind. It will get you noticed, it may even get you admiration from the opposite sex, and it will get you to work, or pose at the weekend. I was really sad to see it go.

Proof then that Harleys can be used in the real world, just as long as you’re ready to get your £17,895 investment covered in salt and corrosion. But do me a favour. Leave the yellow one in a showroom and buy a black or red one.