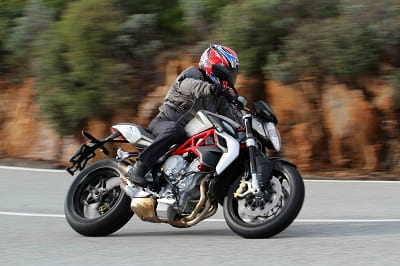 MV is a company that seems to have the wind in its sails at the moment – as well as its sales!

That’s quite a transformation in just two years and something that is reflected in the company’s sales.

On the face of it this may be a concern as the Brutale 800 shares nearly every single component with the smaller Brutale 675. The frame, swingarm, clocks etc are all identical and although the 800 gets fully adjustable suspension unlike the 675, chassis-wise that’s the only difference.

Then there's the motor, which again is remarkably similar. The only changes to the 675 triple to make it an 800 are in the stroke (up 8.4mm to 54.3mm through longer con rods), piston and crank – that’s it. The head, cams, gearbox etc are all unchanged, although the clutch gets an extra plate. So the 675 and 800 are identical? Right? Wrong!

MV say that were the 675 is aimed at ‘young riders and female riders’ the 800 is more aggressive and is a more ‘professional’ bike. Which basically means it’s a bit of an animal…although this isn’t immediately obvious.

Through town the Brutale 800 is remarkably civilised. The riding position is comfortable and throttle response and fuelling spot on – which is great news after the issues with the F3. However get the 800 out of town and its character changes.

Once opened up the MV is remarkably sprightly. Where the Triumph triple is pretty relaxed in its power delivery the MV is far more eager to rev, something that gives it an aggressive feeling and means you need to concentrate when riding. Accelerate hard in any of the first three gears and the Brutale will wheelie off the throttle with little provocation, in fact simply riding over a crest in the road is enough to make the front go light until you snick fourth gear.

While this is great fun, it can be a little intimidating, especially when exiting slow speed corners as involuntary wheelies are pretty much par for the course…

On the open road the MV’s chassis shows its hand. Like the Street Triple the Brutale is agile and fast to respond however I’d say the Italian bike is set slightly firmer on its suspension. It’s not a criticism as the MV isn’t overly hard, it’s just different to the compliant Triumph and I’d say will make the Brutale 800 handle better on track or smooth roads. The brakes, which although lacking ABS (this will be introduced in late 2013) perform perfectly and I had no issues with the MV’s electronics package, although I didn’t really test the traction control.

The MV is not a bike for less experienced riders as the power is pretty ferocious and this, combined with the light weight, can make it a handful on bumpy roads. This aggressive character makes the Brutale 800 nowhere near as user friendly or charming as the Triumph triples, but it is certainly more thrilling to ride and faster.

Having ridden most of the ‘new generation’ MVs I can see why the company is demonstrating such a spurt in growth – its range is starting to look more and more impressive. The only issue now facing the company is its dealer network, which needs expanding so potential buyers can actually test ride an MV rather than just reading about one. 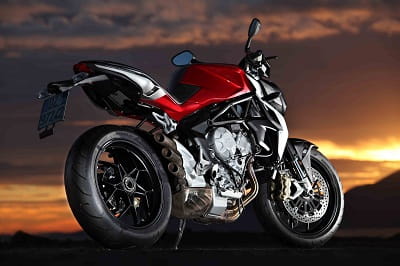