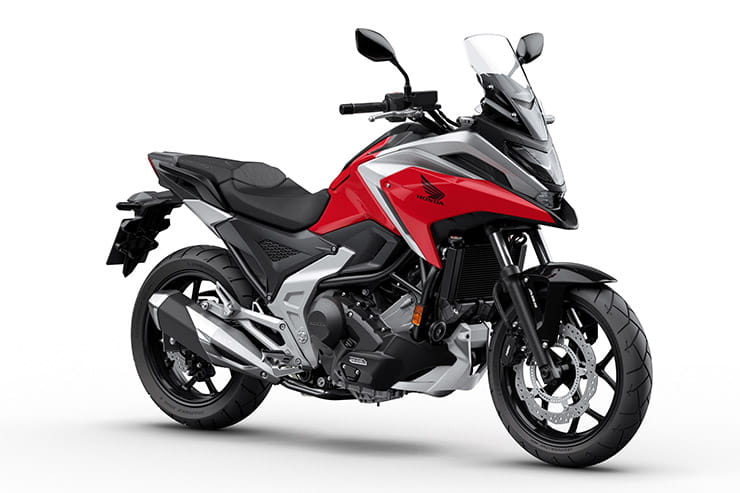 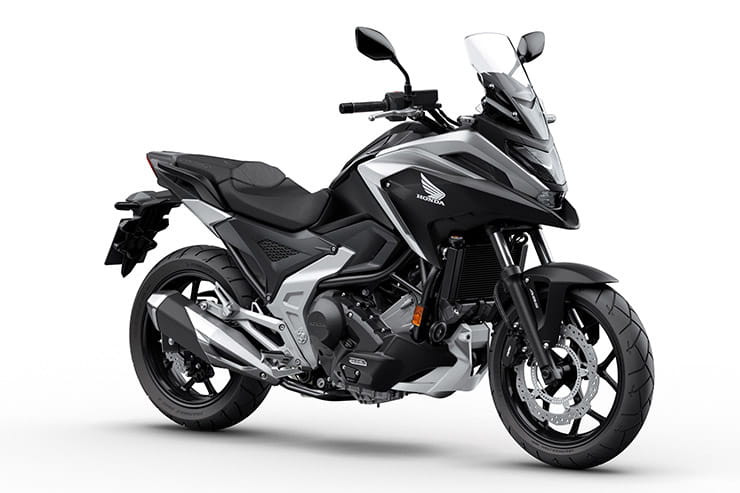 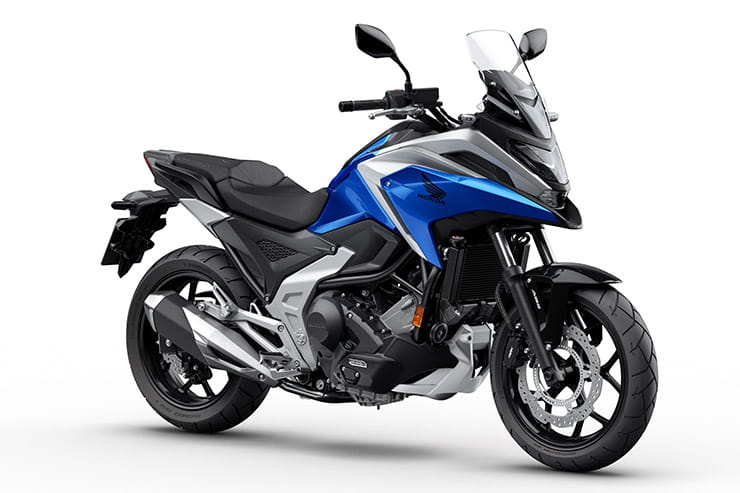 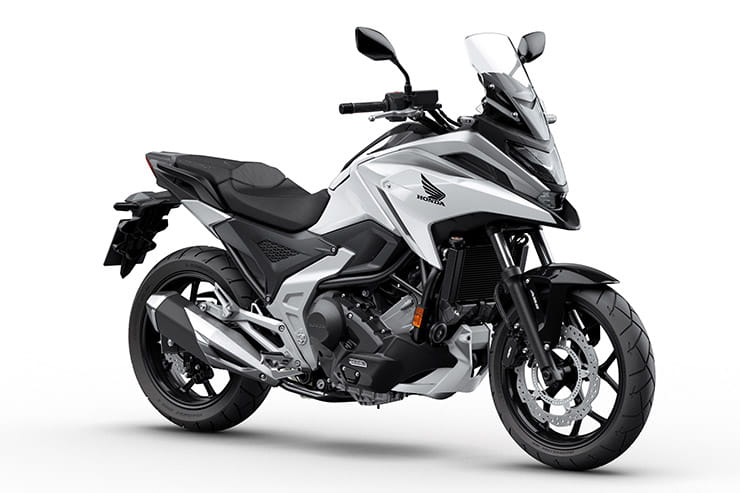 With its adventure-style stance and unparalleled practicality Honda’s NC750X is the most important model in its fuel-sipping NC750 range. For 2021 it’s been given a ground-up makeover to make an even more tempting proposition.

A redesigned chassis and engine mean that despite meeting Euro 5 emissions rules the 2021 NC750X is lighter and more powerful than its predecessor, all without resorting to the capacity increases that many other bikes have turned to in their efforts to improve emissions without losing performance. Add updated styling to the mix, along with improved equipment levels, more technology thanks to a ride-by-wire throttle and an enlarged luggage capacity, and it’s easy to see why Honda is proud of its improvements to the model. 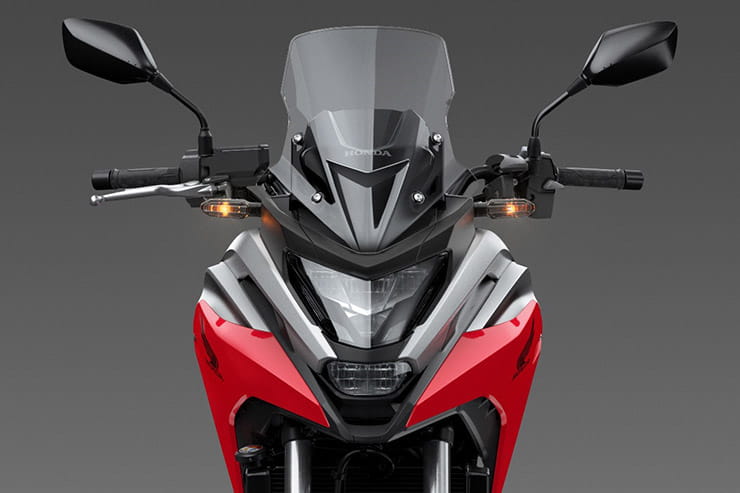 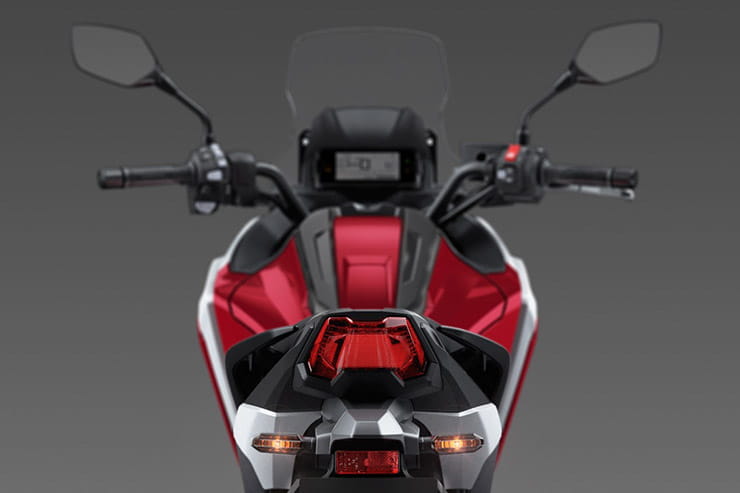 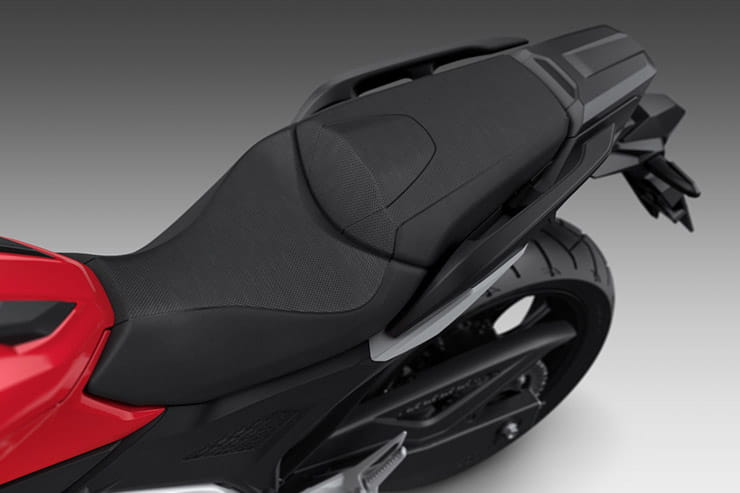 Let’s kick off with the engine. Honda’s NC-range parallel twin was always designed for torque and efficiency rather than out-and-out power, so while the 2021 NC750X’s 57.8bhp doesn’t sound like much from a 745cc twin, it’s still nearly 4hp up on the 54hp of the 2020 model. The peak now comes at 6750rpm, which reflects the engine’s relaxed character but is 500rpm higher than the old model. Torque is up, too, with 50.9lbft at 4750rpm. The improvements are a result of tweaks to the exhaust, the new throttle-by-wire system and detailed adjustments to the camshafts so the valve timing now differs between the two cylinders to maximise each one’s potential.

An A2-legal 47hp version is also offered, with a different throttle body and ECU map, and Honda dealers will be able to swap those components to restrict or derestrict the bikes as required.

While cleaner than before, the new engine’s economy dips a fraction, from 80.8mpg to a still-impressive 79.9mpg, enough for a range of nearly 250 miles from its 3.1 gallon (14.1 litre) tank.

The engine is bolted to a revised transmission that has lower ratios for 1st, 2nd and 3rd gears for better acceleration, and higher 4th, 5th and 6th ratios to boost economy. As before, a DCT version of the gearbox is also offered, tied in with the new throttle-by-wire system and an improved HSTC traction control to offer multiple riding modes.

‘Sport’ gives the most aggressive power delivery, with the lowest traction control settings and ‘mode 4’ DCT programme to hang onto gears for longer. ‘Rain’ is the softest mode, with maximum TC and ‘mode 1’ DCT settings, while ‘Standard’ splits the difference, using moderate response and TC allied to ‘mode 2’ DCT shifts. There’s also a programmable ‘User’ mode allowing you to set your own combination of shift mode, traction control and power delivery. 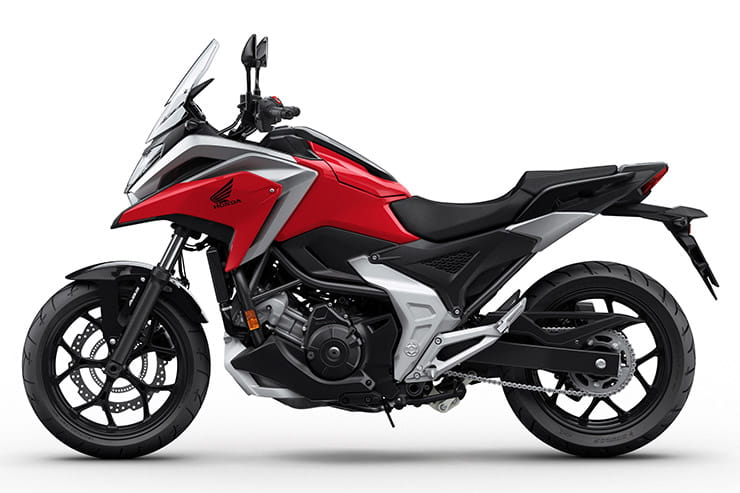 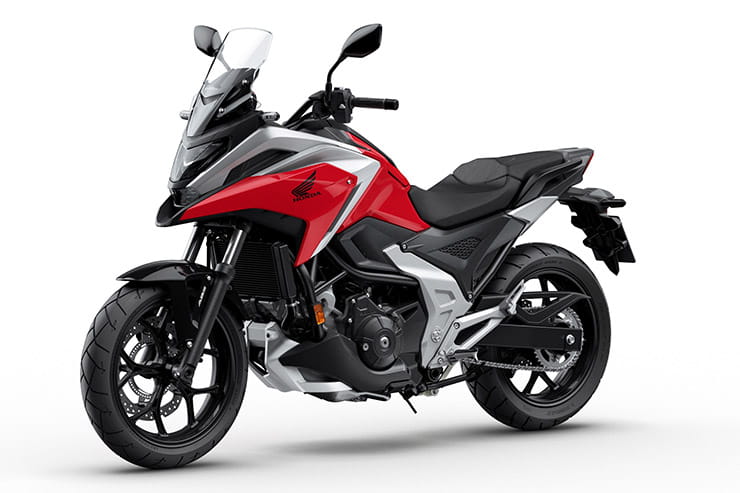 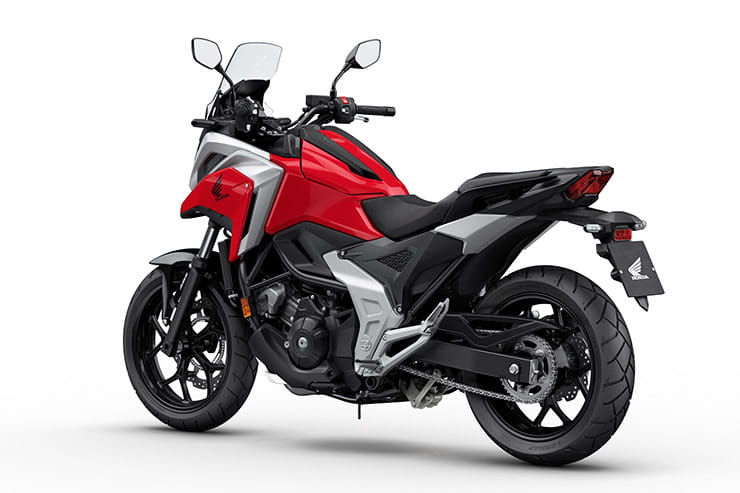 From a quick glance, the NC750X’s tubular chassis looks the same as before, but it’s actually significantly different.

Varying thicknesses for the frame tubes saves 1.8kg, while a repositioned battery makes for more luggage space in the storage compartment under the dummy ‘tank’. It now boasts 23 litres of capacity, and thanks to a revised shape can swallow a full-face helmet. An optional USB-C socket in the compartment is also new.

Since the engine is also lighter than before, the entire bike now comes in at 214kg wet (224kg for the DCT version), which is 6kg lighter than its predecessor.

The suspension has been tweaked, too. In an admission that nobody is likely to take an NC750X off-road despite its adventurous styling, the fork travel is reduced from 153.5mm to 120mm, with the rear shock travel dropping from 150mm to 120mm. Why? Because the resulting 30mm drop in seat height is considered a worthwhile trade-off. 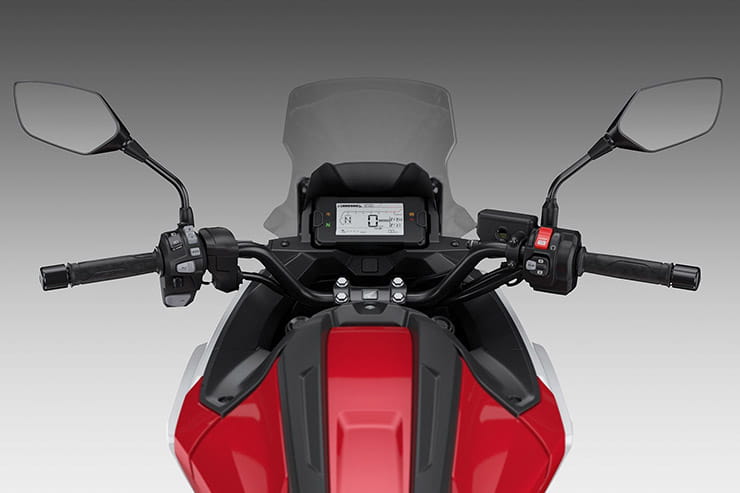 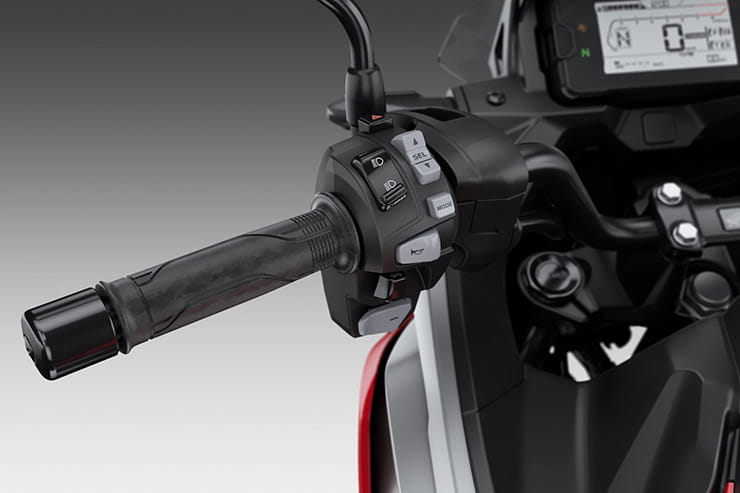 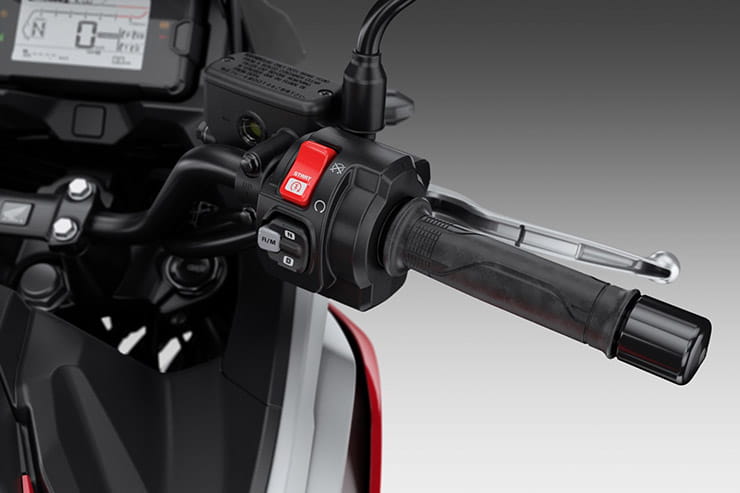 From a styling perspective, the 2021 NC750X’s changes include a new LED headlight and tail light, a more protective screen and new side panels to give a slimmer look. Four colour schemes – red, black, white or blue – are offered.

On-board, a new full-colour LCD instrument panel reflects the current trend towards big, colour screens and the need to be able to illustrate multiple riding modes and all the settings they entail. A switch on the left bar cycles through the modes.

Dig into the options list and you can add more practicality via a 50 litre top box, panniers, a taller screen, side protector bars, fog lights and heated grips, along with a rear luggage rack.

We’ll update with details on price and availability once that information is available.