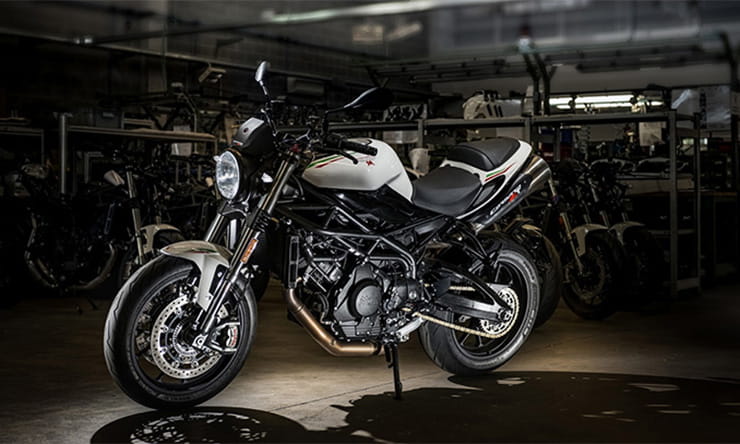 Moto Morini might be one of those companies that operates below the mainstream radar but it’s still churning out bikes in small numbers and has just released the latest iteration of its Corsaro sports-naked.

The Corsaro ZT is a derivative of the existing Corsaro ZZ, sharing the same Euro4-legal 140hp 1200cc V-twin, fully-adjustable suspension and Brembo brakes, but revised to make it a more comfortable machine to ride.

The most striking changes concern space distribution, the tank (smaller, thinner) enables, along with an unchanged saddle, easier dismounting and an easier, more relaxing ride. The design also boasts a new round front headlamp which immediately transforms it into an instant classic which is both pleasant to see and ride. A different, more angled dashboard positioning ensures easier visibility. The rear spoiler disappears while the smaller rear mudguard helps with a more streamlined design, weight and that “racing bike” character which marked the Corsaro ZZ.

Morini says the new bike is also 6kg lighter than the ZZ, and will cost €15,990 in Europe, with a three-year guarantee. 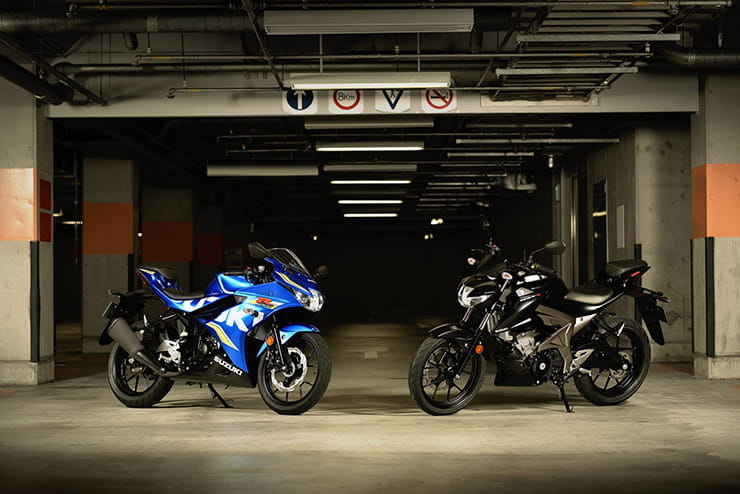 Suzuki and Triumph have both launched new offers to tempt more riders into their respective folds.

The Japanese firm is cutting £500 from the price of the GSX-R125 and GSX-S125 – or adding the same amount to buyers deposits as part of a finance deal – in a campaign targeting new riders.

Recruiting new riders has been a key focus for the Japanese firm, which recently enticed non-motorcyclists into getting a taste for two-wheels with a pop-up shop offering free trial sessions in Milton Keynes’ busy central shopping centre.

With the new offer, customers can either benefit from £500 off the RRP, or add it to any deposit when taking out a finance deal. And with both bikes currently on Suzuki’s hire purchase offer with low-rate, 3% APR finance, it means the GSX-R125 can be ridden for £92.22 or the GSX-S125 for £83.50 with a £1000 deposit and no final balloon payment.

The new GSX-R125 and GSX-S125 get a full LCD dash, while the GSX-R125 gets keyless ignition for that added level of practicality. Both also get Suzuki’s easy-start system, and LED headlights and running lights.

The entry-level machines – inspired by their 1000cc stablemates – boast class-leading power-to-weight ratios in the 125cc supersport and naked street bike class, thanks to a punchy, DOC single-cylinder engine and lightweight chassis.

They also come with an industry-leading three-year warranty and Datatag’s MASTER security kit fitted as standard.

Meanwhile Triumph has added a selection of deals, running until the end of June. Like Suzuki it’s adding a £500 contribution to its Street Twin, Street Cup, Street Scrambler, Bonneville T100, Bonneville T120 and Street Triple. And Speed Triple buyers can get a £1050 (see what they did there?) voucher for clothing and accessories.

Customers interested in buying a Street Twin, Street Cup or Street Scrambler can now take advantage of a low rate 7.9% APR TriStar finance offer alongside a £500 personalisation contribution that can be used in a variety of ways, such as for additional accessories. Both offers extend to purchases of the Bonneville T100 and T120, as does the personalisation offer to the Bonneville Bobber.

In addition to the current low rate 6.9% APR finance deal available on the Street Triple range, customers can also benefit from a £500 deposit contribution on Tristar PCP and HP purchases. This can be used as either an increase on the initial deposit or a reduction of the minimum requirement.

For those interested in a 2017 Speed Triple S or R, there is a £1,050 clothing and accessories voucher available in addition to a low 6.9% APR finance arrangement.

In addition, anyone who completes a test ride of a Tiger 800 or 1200 model before the end of June will be entered into a prize draw to win one of 10 trips to Triumph’s new Adventure Experience in South Wales. 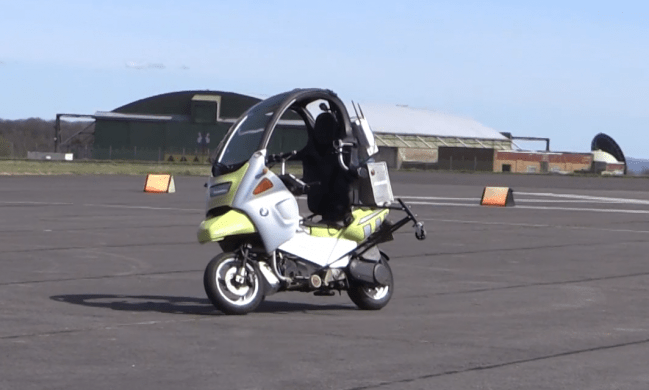 British automotive testing firm AB Dynamics has created a riderless bike that it hopes will be used to train the next generation of autonomous and semi-autonomous cars to react correctly to motorcycles.

Although not autonomous itself – it’s more like an oversized radio-controlled toy – the test bike can be put into potentially dangerous situations with prototype self-driving cars without putting a rider at risk.

The technology demonstrator uses a BMW C1 motorbike with a steering controller designed by AutoRD to keep it upright, in future a more modern motorbike will be used. AB Dynamics provided an onboard robot controller running its standard RC software, meaning that the motion of the motorbike can be programmed using the standard RC software and path-following. Furthermore, AB Dynamics’ cross-platform Synchro technology allows coordination of the motorbike with other moving elements (cars, ADAS targets).

Senior systems engineer Richard Simpson explains: “By using our industry-standard RC software, it allows a wide range of potential applications for the driverless motorbike. In this video, we demonstrate that excellent low-speed control is achievable, and also that we can synchronise the bike’s motion with other moving objects. We foresee interest from customers working in ADAS development and from those developing tests for self-driving cars. At the present moment, we have proved that the technology works, and now we are looking for interested potential customers to help us steer further development on this project. If you think a self-driving motorbike could be useful for your testing, please get in touch.”

An enormous auction of more than 600 bikes – ranging from ex-racers to choppers, veteran to modern but united in being fascinating machines – is getting underway in Las Vegas.

Of them the Lattin Collection is the main attraction.

When Lattin hooked up with Bud Ekins, the two racers hit it off, with Lattin going overboard buying, building and riding motorcycles. Early racing motorcycles became one of his main interests, as Lattin feels they have more character and history than standard civilian transportation motorcycles.

“It is fascinating how the early motorcycle racers competed five times a week, lived/died and were considered the rock stars of the era,” explained Lattin. “The repairs, modifications and the innovations that were implemented on these racing motorcycles was amazing.”

Although Lattin is known to be a kid at heart, he will be 82 years young in August, and he doesn't ride bikes on the street any longer. As the former president of the Southern California Timing Association (considered the oldest operating racing organization in the U.S.) and former chairman of the Bonneville Nationals Board, Lattin does still enjoy nominal desert riding, though he said he is thinking it’s time to pull the reigns in on his land speed racing a bit as well. But it’s unlikely he’ll be out anytime soon—he is currently building a streamliner that is expected to run more than 400 MPH. As Lattin explained, the slowing-down process is gradual, and as part of it, he’s made the choice to let go of some of the fine motorcycles in his collection.

“After raising hell and going fast all of my life, I’m choosing to slow down a bit to enjoy my kids, my grandkids and to spend more loving quality time with my ol' lady. Life can be a great ride!” – Jim Lattin

You can browse all the lots at the sale here – but be prepared to lose hours as you pick out the most desirable gems. 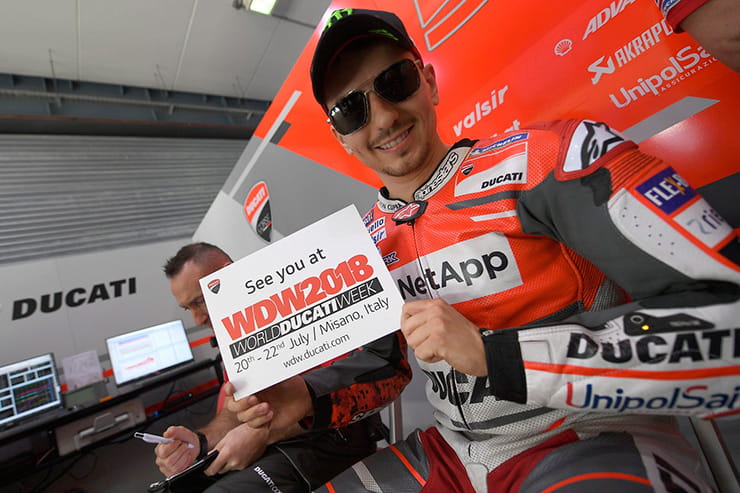 Ducati’s 10th World Ducati Weekend on 20-22 July is once again promising to be the event of the year for fans of the Italian brand.

The countdown to World Ducati Week 2018 has begun. The biggest international Ducati gathering, held from 20 to 22 July, will attract thousands of Ducatisti and passionate motorcyclists from all over the world who are ready for the peaceful invasion of the Adriatic Coast and of the Misano World Circuit "Marco Simoncelli".

Preparations for this exciting and unique event are in full swing, and Ducati riders have already confirmed their presence. They are ready meet their fans in person and share with them their passion on the track and in the paddock of the Misano circuit, but also during the many activities planned for the WDW2018 in various locations of the Riviera Romagnola.

Andrea Dovizioso and Jorge Lorenzo were among the first to confirm their attendance. The two Ducati MotoGP Team official riders are only two of a rich list of champions that makes the WDW2018 even more exciting. There will be a lot of motorcycling celebrities from the past, including names such as Casey Stoner, Troy Bayliss and Carlos Checa, who have won important championship titles in MotoGP and SBK with Ducati. Michele Pirro is also attending, who is the official Ducati test rider and now also undisputed leader of the CIV (Italian Speed Championship).

A fundamental role will also be played by the riders of the Aruba.it Racing – Ducati Team, Chaz Davies and Marco Melandri, who are currently competing in the Superbike championship. Together with them is Michael Ruben Rinaldi, the new entry of the team, and Superstock 1000 Champion with Ducati in 2017.

The Alma Pramac Racing Team will be at WDW with Danilo Petrucci and Jack Miller, as well as other private riders such as Tito Rabat, Xavier Simeon, Alvaro Bautista and Karel Abraham for MotoGP, Xavi Fores and Lorenzo Zanetti for SBK.

Riders will be involved in many on track activities like races, interviews, special initiatives, interacting with fans, giving autographs and taking selfies with as many as possible of the thousands of participants who will crowd the Misano World Circuit during the three days of WDW2018.