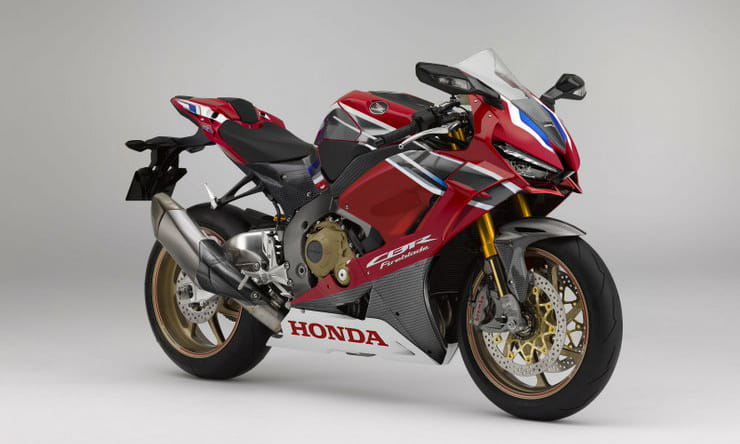 Last week we revealed that Honda is working on a new Fireblade for 2019 with a power target of 212hp (215PS) – and the firm has inadvertently added an extra dash of evidence by submitting a new trademark application for the name ‘Fireblade’ in the USA.

The application, filed with the United States Patent and Trademark Office, is to get permission to use the name Fireblade on ‘motorcycles and motorcycle structural parts’.

While Honda has used that name for decades here in Europe, it’s never called its top-line superbike ‘Fireblade’ in the USA. Over there it’s just the CBR1000RR, and previously was the CBR900RR.

Why bother to register ‘Fireblade’ as a name now, more than a quarter of a century after the bike appeared? Well, we’ve already speculated that Honda might be following the lead of Ducati’s 1103cc Panigale V4 by dispensing with a race-legal, sub-1000cc capacity, and instead chasing performance with a new 1100cc or even 1200cc engine. If that’s what Honda is doing, using the name Fireblade (which is well recognised in the States even if it’s not officially the bike’s title) instead of ‘CBR1100RR’ or ‘CBR1200RR’ would move the focus away from the engine capacity. Ducati has done the same by calling its new superbike ‘Panigale V4’, not ‘Panigale 1103’.

Even if Honda isn’t shifting up a capacity class with the next-gen Fireblade, the trademark application in America is certainly evidence that a model change is on the way. It would be very strange for the company to change the bike’s name over there without altering the machine itself.

Did You Know: The Fireblade has always carried that name in Europe. It used to be FireBlade with a capital ‘B’ until the 2004 version arrived – the first version developed without the input of Tadao Baba. The removal of the upper-case ‘B’ was a mark that Baba wasn’t involved. But according to the European Union Intellectual Property Office, the trademark Honda actually has rights to is ‘Fire Blade’ – two separate words – rather than the compound version that’s actually written on the sides of the bikes. 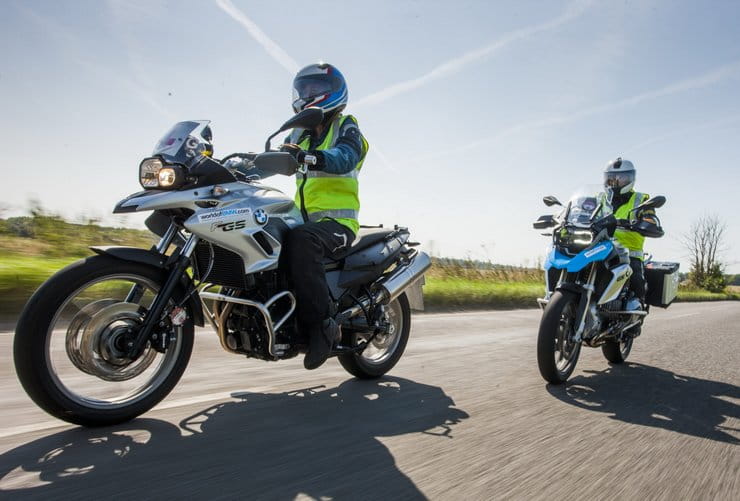 BMW has doubled the size of its Rider Training network, with establishments in Darlington and Edinburgh joining the existing sites.

Like the existing centres, the new ones offer courses for novices – CBT and Direct Access – and advanced post-test training right up to RoSPA Advanced Rider standards.

As well as simply booking training on its own, riders can roll together the cost of training with the cost of a new bike and kit.

Taking that route, a new rider could put down £650 and take on a £109-per-month payment, for which they’d get a seven-day Direct Access course along with their own brand new BMW and BMW riding kit.

Scott Grimsdall, BMW Motorrad UK Marketing and PR Manager, said: “The addition of BMW Rider Training centres in Darlington and Edinburgh will enable thousands more new and experienced motorcyclists to experience the best bikes with the best instructors, while benefitting from the highest standards of tuition and safety. We are immensely proud that since opening our first BMW Motorrad training centre in 2006, we have helped more than 10,000 people to learn to ride and grow their skills.”

Ian Biederman, UK Rider Training Chief Instructor, said: “We believe that offering our customers a true ‘BMW experience’ from the earliest point in their motorcycling lives is vital to establish the greatest confidence, safety standards, and road skills of any rider. Each of the BMW Rider Training centres provides new and experienced riders with a premium experience rather than the sub-standard ‘under-the-arches’ training some riders suffer.”

Separately, BMW has announced that it’s extending the standard warranty of its new bikes from the statutory two years to three years, starting with any machine purchased on or after 1 August 2018. It’s also extending its Europe-wide Roadside Assistance for the same period. All BMWs are covered except the highly-tuned, track-only HP4 Race.

Nick Reece, national aftersales manager for BMW Motorrad UK, said: “The change to this support package matches perfectly the needs of our customers. With worldwide cover for warranty, including unlimited mileage, and Roadside Assistance wherever you are in Europe, those riders who choose to use their bikes for holiday and adventure travel – as many do – can now travel with added reassurance.” 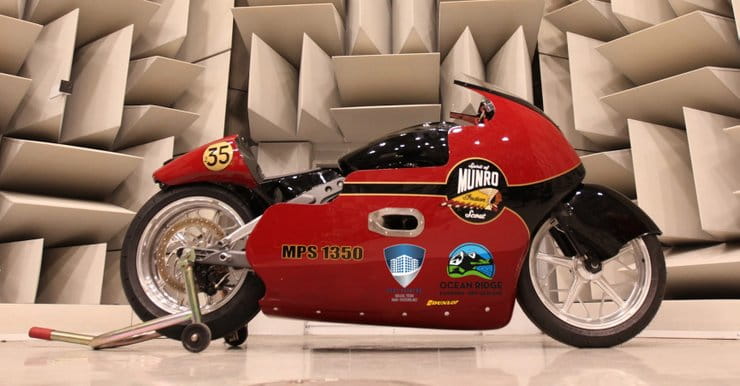 3: Indian aiming for 200mph with Lee Munro and ‘Spirit of Munro’

Burt Munro’s ‘World’s Fastest Indian’ leapt into the limelight with the movie of the same name back in 2005 and now his great nephew, Lee Munro, is also aiming for 200mph on an Indian.

He’ll be riding the Scout-based ‘Spirit of Munro’ partial streamliner at Bonneville Speed Week this coming week. Last year he took the machine to 191.286mph to mark 50 years since his great uncle’s record run, and this year 200mph is his target at the 70th anniversary of Speed Week itself.

Gary Gray, Vice President, Racing, Technology & Service for Indian Motorcycle, said: “Indian Motorcycle was honoured to partner with the Munro family last year and pay tribute to Burt’s incredible accomplishments and land-speed record set in 1967. We’re eager to be back on the salt flats with Lee and the ‘Sprit of Munro’.

“Our engineering team led by Wayne Kolden and Dan Gervais have put long hours into developing a bike capable of hitting the 200-mph mark and we’re excited to watch Lee pursue this goal.  I would also like to thank our sponsors Cargill Station Ltd, Garry Robertson of Ocean Ridge Kaikoura New Zealand and Jerry Stinchfield of Roof Systems of Dallas, TX for helping us get to the salt.”

Lee Munro said: “My great uncle Burt is a significant inspiration for my own motorcycle racing career, and his appetite for speed is clearly a part of my DNA,” said Lee Munro. “Partnered with the exceptional team at Indian Motorcycle, I know we can make our dreams of hitting 200 mph a reality.” 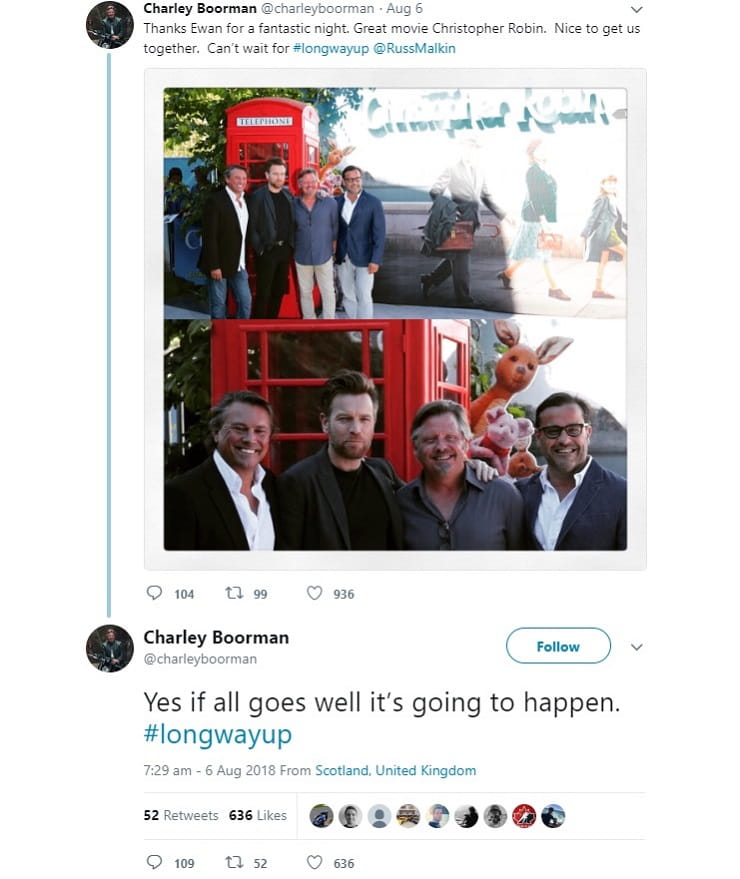 4: The Long Way Up is coming

Charley Boorman has become a fixture in the bike industry since he sprung into the limelight as Ewan McGregor’s pal during the Long Way Round TV series that aired in 2004-5.

The pair’s BMW R1150GS-mounted, round-the-world adventure turned out to be a massive international success, and is still regularly cited as the spark behind the adventure bike sales boom that started around the same time and is still going strong now. BMW certainly reaped the reward, with the R1200GS (which had replaced the R1150GS by the time the series aired) topping sales charts in the UK and much of Europe virtually every year since then. In perhaps the worst decision since Dick Rowe opted not to sign the Beatles to Decca Records, KTM – McGregor and Boorman’s first choice – famously decided not to supply bikes for the journey.

After the Long Way Round, the pair soon repeated the formula with the Long Way Down, a trip from Scotland to South Africa, and there’s been talk of a follow up ever since that series finished in 2007. Now Boorman appears to have confirmed it – using the hashtag #longwayup on Twitter. He posted a picture of himself with McGregor and Long Way Down producer Russ Malkin at a promo for the movie Christopher Robin, saying “Thanks Ewan for a fantastic night. Great movie Christopher Robin. Nice to get us together. Can’t wait for #longwayup.”

He followed that up with a clarification, saying “Yes if all goes well it’s going to happen. #longwayup” 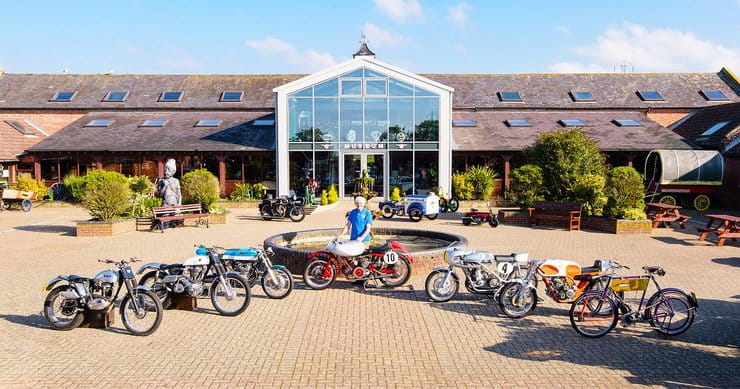 Any lover of old bikes is sure to have visited the Sammy Miller Museum in New Milton, Hampshire. And there’s a good chance that you’ll remember it not only for the stunning collection of bikes but for the way they’re so tightly packed in, despite an extension that was added in 2015.

Earlier this year, the museum applied for a two-story extension, replacing an existing single-story section of the museum, to provide more space for its ever-expanding collection.

However, the New Forest District Council has refused the application.

The refusal of the two storey extension followed criticisms about the size of scheme and the “poor design” of the project.

A spokesman for the Sammy Miller Motorcycle Trust, which run the museum, said: “The trust is accepted as one of the leading motorcycle museums in the world and a major attraction to the New Forest.

“People come from all over the world to combine a visit to the National Motor Museum, Beaulieu, and our complex in New Milton.

"Our application was to provide more display areas for technical, engineering, sectional engine displays and motorcycles, which are not only for our visitors to enjoy but for students studying engineering.

“We urgently need more library and archive storage and cataloguing facilities, which this extensions would have provided.” 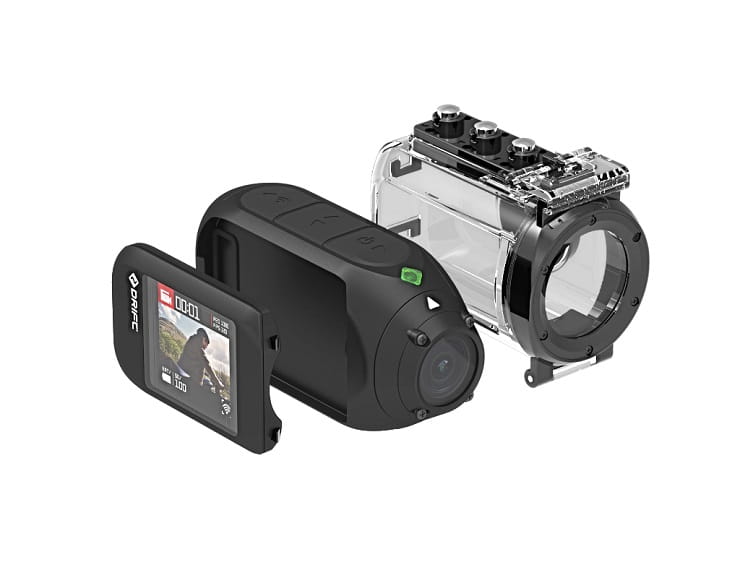 Given the sheer number of riders opting to record their exploits with helmet or bike-mounted cameras, Drift has released its new Ghost X action cam with a clear eye on capturing sales in the two-wheeled market.

According to Drift, the Ghost X ‘brings together the sleek Drift form factor, no-fuss operation, and our longest battery life to date to let you capture the ride in crisp 1080p Full HD no matter what’.

Drift also has its higher-resolution 4K camera in stock in a ‘Motorcycle Pack’ complete with an LCD touchscreen module and waterproof case. It’s £299 and can be found here.