The stranger side of biking 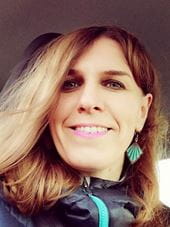 Nicola is a Fellow of the Royal Anthropological Institute and the founder of anthromoto (www.anthromoto.org.uk), a British motorcycle culture research project.  She lives in North Yorkshire with the two fast loves of her life – an ex-racing greyhound called Joe and an equally adored 2006 Suzuki GSX-R750. 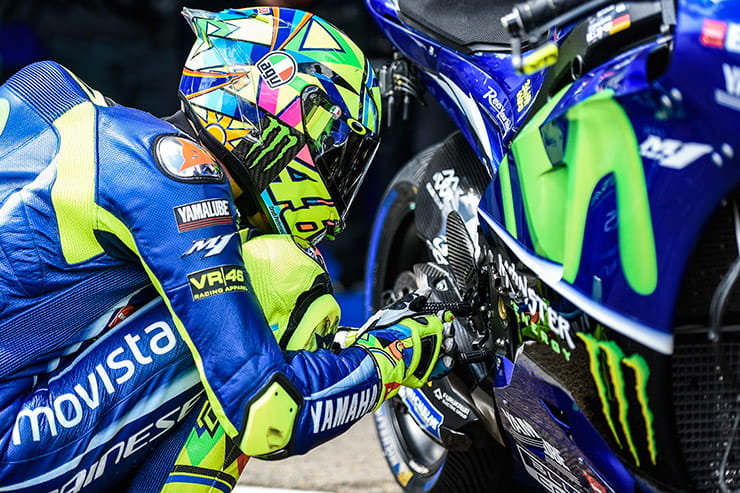 Bikers are a superstitious bunch…

Have you seen the film I Bought a Vampire Motorcycle? It’s a 1990 British comedy horror about a possessed Norton Commando 850 that seeks revenge for the murder of its owner by going on a killing spree. After several failed attempts, our hero, Noddy (played by Neil Morrisey of Men Behaving Badly fame), manages to overcome the murderous machine.

In the league of cringeworthy horror flicks, I’d say it goes somewhere near the top; terrible special effects (think tomato ketchup and papier-mâché), the inclusion of a talking turd that takes on the appearance of a dead man, and the fact that a tanning sunbed is crucial for the bike’s demise means that if you’ve got no better way to spend 100 minutes of your life, then the film comes highly recommended.

Blood suckers and bikes may seem an unlikely duo normally confined to the realms of fantasy (unless of course they’re on the front of a Meat Loaf album) but in the real-world, motorcycles really can attract their fair share of weirdness.

In the course of my own research into the stranger aspects of motorcycle culture, I’ve come to learn that us bikers can be an odd lot; from unlucky colours to patron saints; from guardian bells to a motorcycle God: motorbikes are inherently linked to superstition and spirituality wherever we find them… 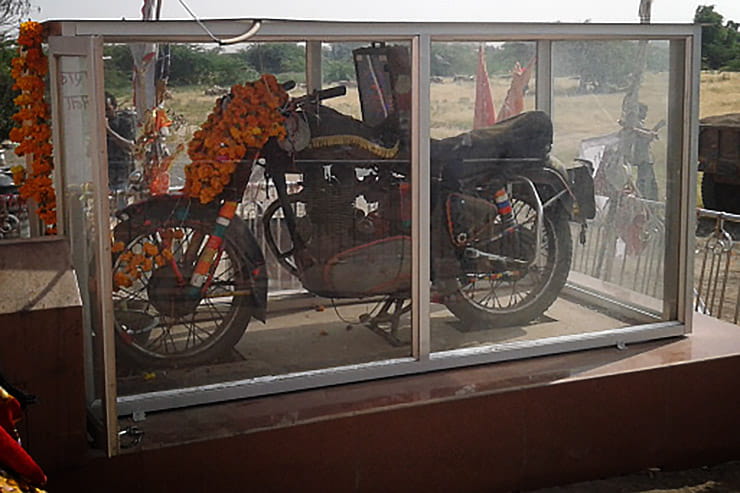 Om Banna’s bike is said to have found its way back to the site of his crash. Photo: Sentiments777

Yes, there is a motorcycle God (no, it’s not you)

In December 1991, Om Banna – the son of a village elder – was fatally injured while travelling on his Royal Enfield Bullet 350 through a remote district of Jodhpur in North Western India.

The story goes that his bike was removed the next day by the police but repeatedly found its way back to the accident spot, despite having its fuel tank emptied and being locked up at, well, the local lock-up.

Seeing some moto-magic at work and believing the bike to be seeking it’s fallen friend, the local community created a shrine at the site of the crash to house this miraculous motorcycle. To this day, ‘Bullet Baba’ attracts thousands of worshipping visitors each year who adorn it with flowers and incense, get a blessing from the temple priest and stock up on the keyrings and keepsakes that are sold around the motorcycle’s glass enclosure. Local legend dictates that the bike can sometimes be heard revving in the dead of night, and it’s believed to be partial to a tipple of liquor applied to its wheels. If you do find yourself in that neck of the woods, make sure you stop and offer it a drink – preferably alcoholic – otherwise you might be in for a bumpy ride from some malevolent Indian road spirit. Unless perhaps, you’re carrying a guardian bell… 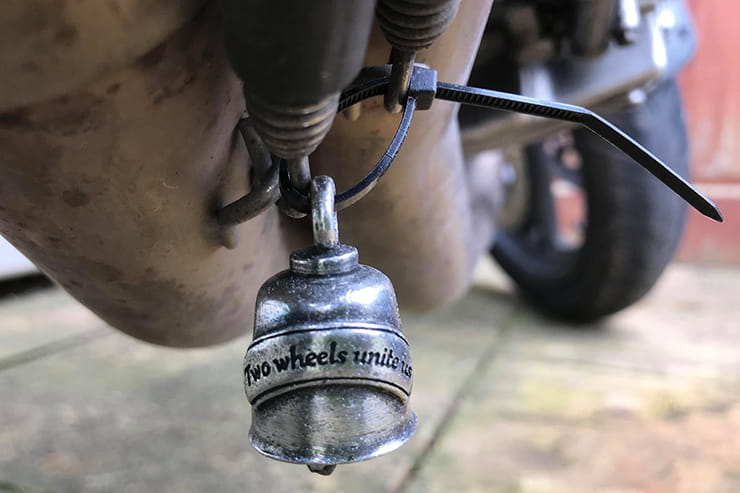 Ever wondered what the meaning of a bell on a motorcycle is?

What is a guardian bell, and why do bikes have them?

Researchers have documented a belief in evil road spirits all over the world. From Brazil to Nigeria, the Isle of Man to America, these ‘gremlins’ (from the Old English ‘gremman’ meaning ‘to vex’) are said to be the cause of mechanical mishaps while out riding.

According to motorcycle folklore, attaching a small ‘guardian’ bell to your motorbike ensures that these miniscule goblins are taken up into the hollow of the bell, where its ringing drives them insane and causes them to hop off, and jog on.

Like with most powerful talismans, the giving and receiving of these bells follow some pretty strict rules. They’re said to be more powerful if received as gift than bought for yourself; a bell should not be removed from the motorcycle for which it was intended, and they need to be hung at the lowest point of the bike for the greatest effectiveness. Don’t go putting it on your handlebars or you’re asking for trouble.

Accounts for the origin of guardian bells are numerous. One American story says it was a Father Christmas-type figure delivering presents on his motorcycle to children near the Mexican border who first frightened the road gremlins away with the ringing of the bells he was carrying. Others claim it was a tradition borrowed from fighter pilots, who after the end of the Second World War, brought back home the good luck bells they’d carried in their cockpits, and later attached them to their motorcycles.

Whatever your thoughts about the road gremlin belief, guardian bells continue to be bought and exchanged throughout the world and are part of a whole load of superstitious behaviour that comes with owning a motorbike. 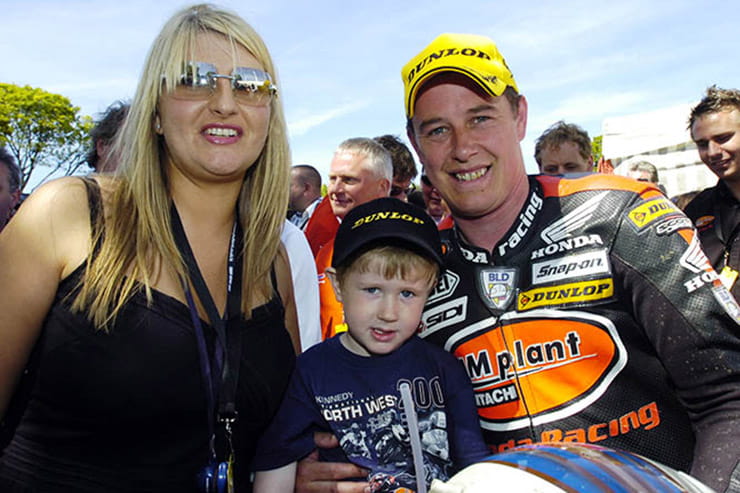 John McGuinness might be one of the fastest road racers, but he’s got his own superstitions…

Well, hold your horsepower. For a start, avid fans of motorcycle racing will know of the rituals used by some top-level riders when preparing for a big competition. Many of us have seen Valentino Rossi crouching down beside his bike and holding the foot peg before taking his place on the grid, right? Or what about the ‘see a penny pick it up, for the race you’ll have good luck’ superstition of John McGuinness? These make sense when you consider that during a race these men will reach the same speed as a commercial airliner at take-off, so invoking Lady Luck is probably one of the many things – rational or irrational – they do to try to keep themselves in one piece.

But evidence exists of more everyday superstitions affecting us mere mortals; machine colour, the position of your rear foot pegs and what you do with your helmet have all attracted motorcycle mythology…

What colour motorcycle is bad luck?

Green bikes are considered unlucky by some (obviously not Kawasaki!) because of the colour’s dual association with negative emotions such as naivety or jealousy (think ‘green with envy’ or describing an inexperienced person as ‘green’) and the fact that Second World War soldiers who rode army-green Harley Davidson WLA motorcycles often got killed.

Biker superstition also has it that riding with the rear foot pegs up or down is good or bad depending on who’s trying to hitch a ride – foot pegs up and there’s no hold for your guardian angel, foot pegs down and you’re giving a leg-up to an evil spirit.

And finally, make sure that you don’t drop your helmet – the expression ‘as goes your helmet, so goes your head’ is not alleged to have any basis in being sensible about replacing a damaged lid. Instead the idea is that dropping your helmet attracts bad luck for your ride. You have been warned…

Of course, no kooky conversation is complete without making a mention of the moon. And yes, you’ve guessed it, it isn’t good. Recently published research in the British Medical Journal has shown that you’re more likely to die on a motorcycle when there’s a full moon, and this effect is enhanced if it’s a supermoon, where the moon is closer than usual to the Earth. In view of all this new-found knowledge, if you still want to ride your green bike with the rear pegs down under a full moon and with no guardian bell attached, then maybe you could at least ask for the help of the patron saint of motorcycling to keep you well. In fact, there are two…

Saint Columbanus. It’s not a name that immediately springs to mind, but this sixth-century Irish Christian monk was recognised as the patron saint of motorcycling by the Vatican in 2002. Presumably not because he rode a motorbike 1,500 years ago, but his love of wanderlust throughout his life was best placed to represent bikers in the Christian Church.

And just to prove that sisters are doing it for themselves, we have a female patron saint of motorcycling too – Our Lady of Grace, who is honoured by riders every summer at the annual ‘Blessing of the Bikes’ ceremony held in many churches around the world. 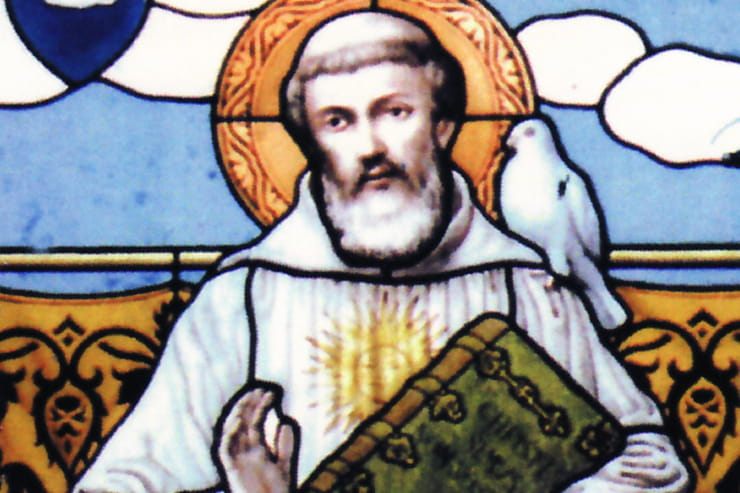 More than a machine?

Saints and the supernatural aside, for many of us the motorcycle occupies a position in our lives of being more than just a machine. As modern technology has given us bikes with the powers of Gods, is it that surprising that some of us weave spirits, superstitions and demons into the very fabric of the metal that we ride?

Talking to your bike, sporting a guardian bell or even believing in the divine properties of a mystic motorcycle may seem a bit far out, but as an anthropologist I know that human beings sometimes breathe life into things that we know to be objects. With the increased introduction of artificial intelligence into vehicle technology, I suspect that people will increasingly give meaning to their motorcycles.

So, do it – embrace your superstitions, put your left glove on before your right, offer gifts to the Gods of speed and thank your bike when it gets you through that awful corner. Your position as a member of this funky species we call humans will be reflected by it, just don’t go buying one of those dodgy Norton 850’s…

Whatever your superstitions, BikeSocial’s parent company, Bennetts, has launched a new bespoke motorcycle travel insurance, which offers cover for any size of bike, wherever you ride. Policies are available for single trips or all year, and can even include protection for your whole family.