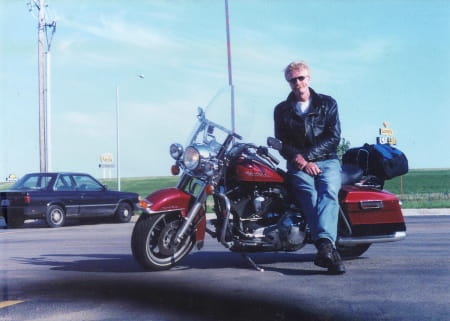 I strapped on an open face helmet, adjusted my shades, zipped up my leather jacket and pressed the go button on a Harley Road King.

It was a cold spring morning in Chicago , ahead of me was the 2,448 miles of Route 66 to Los Angeles, and it was the best moment of my motorcycling life.

For Route 66 makes your heart sing more than any other road, and there is no finer feeling than getting up every morning, checking out of a historic motel, packing your stuff on a Harley and riding west.

The Main Street of America, in the Thirties depression it carried thousands of Okies on overladen jalopies to the promised land of California.

In the war, it was jammed with Jeeps and trucks, and when peace returned, the soldiers came back with their families on holiday, Bobby Troup wrote Get Your Kicks on Route 66, and Jack D Rittenhouse published the first Route 66 guidebook.

In the Fifties, Disneyland opened, Jack Kerouac wrote On the Road, and the lure of California grew even stronger.

In the Sixties, hippies hitched the road and CBS ran a hugely popular series called Route 66 about two adventurers who travelled its length in a red and white ’57 Corvette.

Then, the freeways came, and in 1984 the last stretch of Route 66 was bypassed near Williams, Arizona.

But you can’t keep a good road closed, and 85 per cent of it is still there, ready and waiting for you, complete with painted deserts, meteor craters, teepee motels, frozen custard stands, Jesse James’ hideout and the Big Texan Steak Ranch, where anyone eating the 72oz steak in an hour gets it free.

There are several books on the road on Amazon, but my favourites are Route 66: The Mother Road by Michael Wallis, for inspiring stories and interviews with great personalities, and Route 66 by Tom Snyder, a mile by mile guide to motels, diners, gas stations, garages and characters.

So do it. You’ll remember it for ever.

EagleRider has two-week guided rides of Route 66 from $4,201 per person, including bike rental, accommodation and pretty much everything except air fare to Chicago.