15 reasons why riding Route 66 will change your life 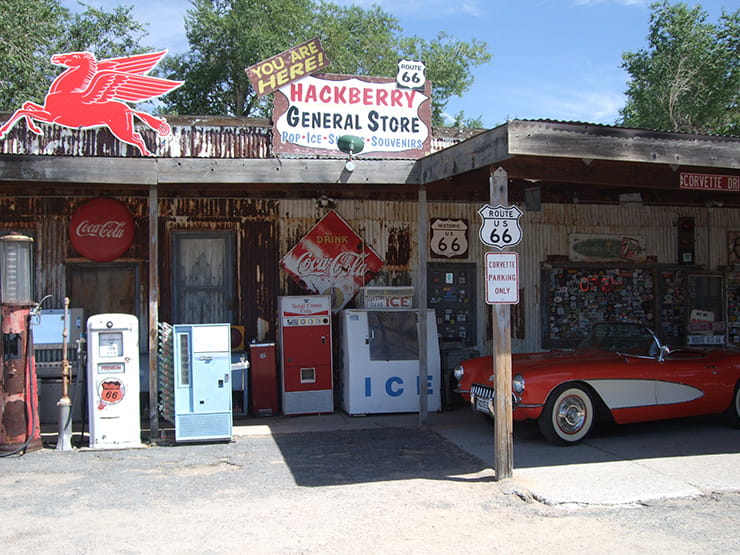 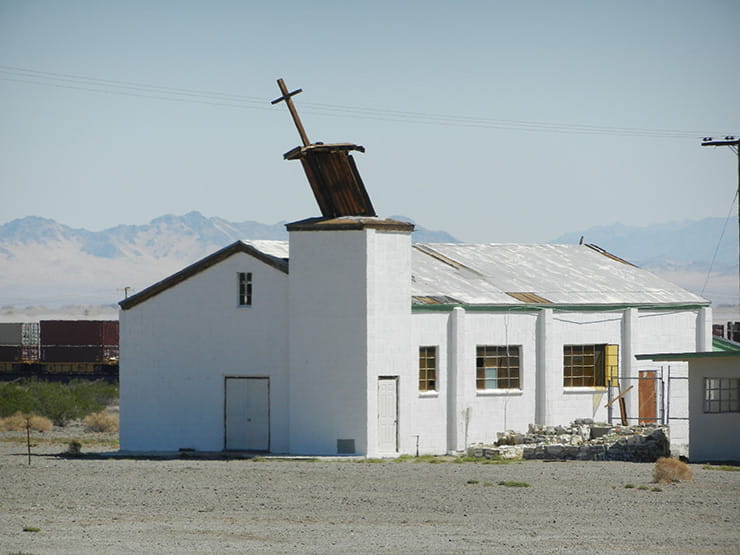 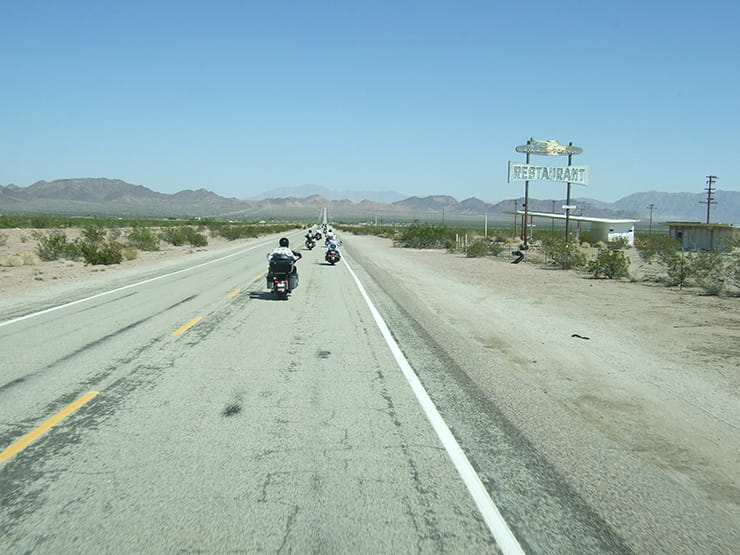 1. America is not Hollywood.

Think you know America? Maybe the glossy bits; the slick TV America. Maybe even the Hazzard County Hicksville or the John Wayne deserts. That’s just a tiny window. Route 66 is both the world’s longest tourist attraction and America’s least touristy attraction. Most of the America that you’ll see on the tour is poor – left to wither when the freeways bypassed 66 in the late 1970s. 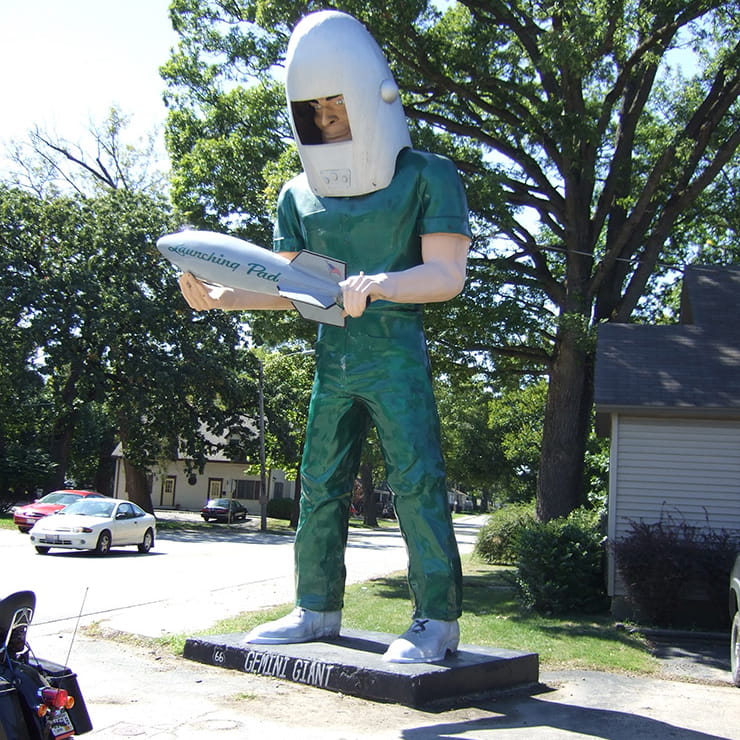 The Gemini Giant is a landmark statue on Route 66 in Wilmington, Will County, Illinois. It stands outside the Launching Pad Drive-In restaurant, the statue is 30 feet tall

2. It’s better than that

Eye-popping scenery meets down-at-heel life you never thought existed in the first world. Thoughts wander and your brain churns the stuff it filed away months ago and never got time to consider. A relaxing holiday at 62mph. Feel your mind unwind.

Choose a bike with a radio because then you get inside the culture. Classic rock or country dominates, sharing airwaves with fire-and-brimstone religious crazies and unsettling lone wolfs working the only transmitter for miles to unload their peculiar vision of right and wrong. You really couldn’t make it up and you wouldn’t want to break down round here.

And then there are the people. Good ones, bad ones, funny ones, friendly ones and a the (very) occasional rude ones (who all work at the airport). Our favourite was Cowboy Sam, a real-life wrangler in the barbed-wire museum, Arcadia, Oklahoma. He talked and we smiled, with tears in our eyes as he told of the famines and the dust bowl migrations. That was the moment; Route 66 isn’t a road, it’s a living chunk of American history, 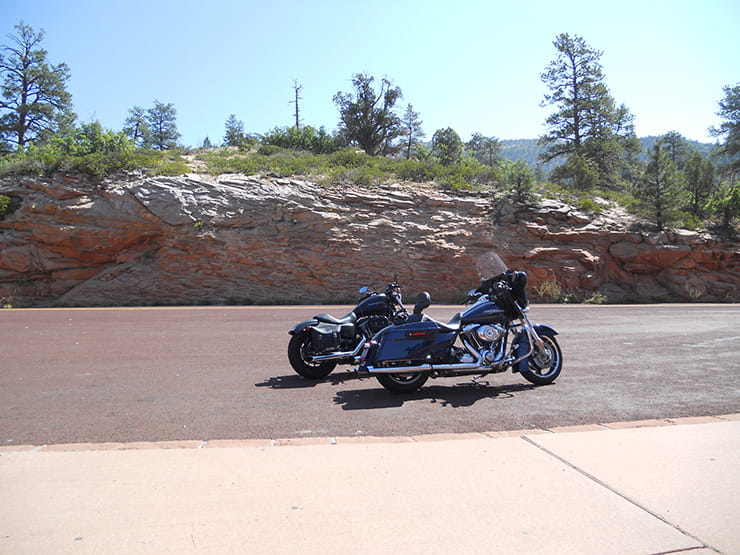 Even when they’re hot. Heavy, but not slow. Involving, but dependable too. Old-school motors, soaking up the desert heat for hours without complaining. There are easier bikes to ride and plenty more comfortable too, but Route 66 has to be ridden on a proper Harley Davidson, otherwise it’s just a road 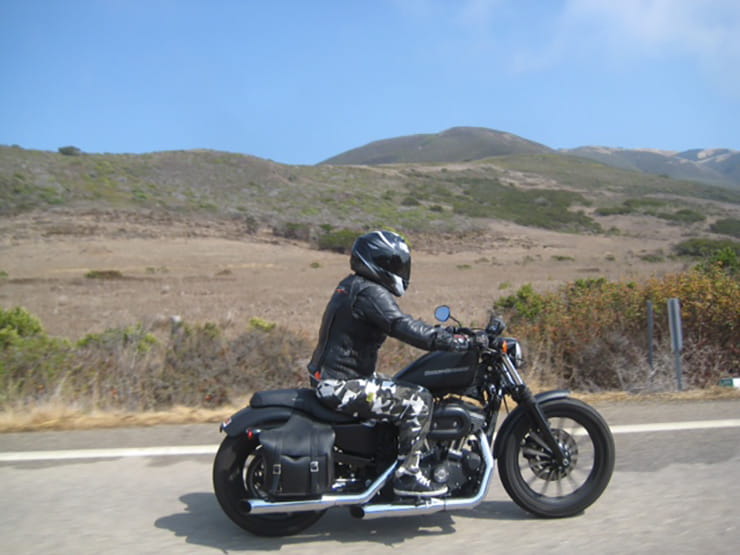 As Brits we took full leathers, full face helmets, bike boots and waterproofs (just in case). By day two it was t-shirt and jeans at 70mph because in Missouri’s heat and that humidity you’ll pass out with heat stroke in anything else. My Harley became a mobile tanning salon and I was still too hot. You can lecture all you like about safety, but in those conditions you’d be half naked too.

The smart move is a vented mesh suit and cooling vest. The second time we rode in California that’s what we took and stayed safe and cool at the same time. 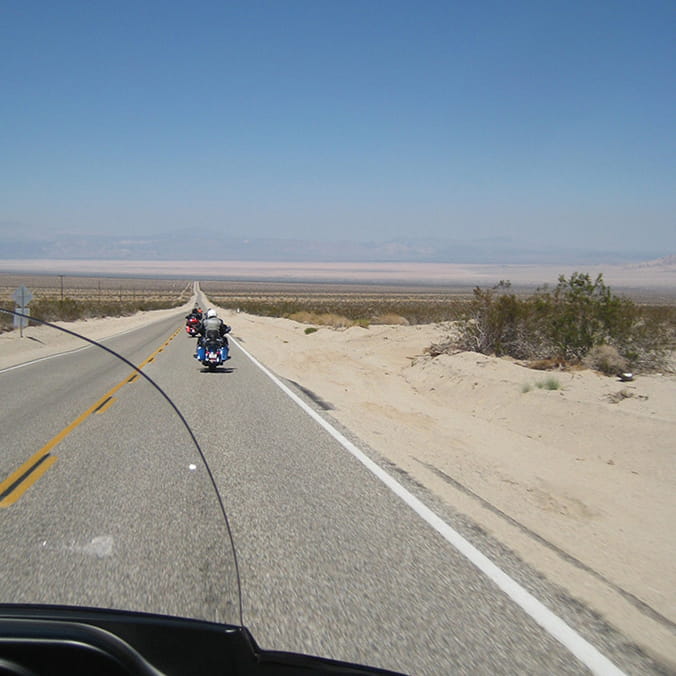 Because after all those years of planning every ride like an extra protective new mother, it was a huge part of the ‘once-in-a-lifetime’ experience to get up every day knowing it was going to be hot enough to not worry and to trust my riding and those thousands of miles I’ve done on a bike to keep me safe. 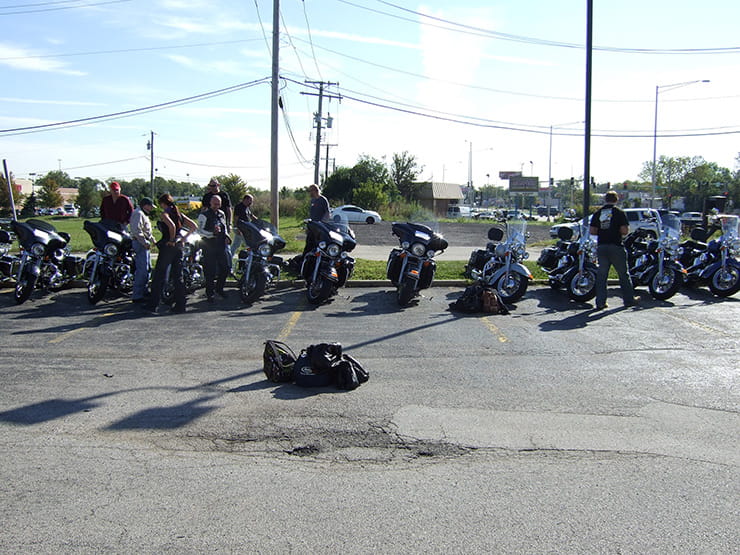 Not really. But the main reason to do a guided tour is sharing the experience with like-minded new best friends. The stars of our show were seven Essex geezers whose ages ranged from twenty-four-to-sixty-something. Family and friends on a good time holiday of a lifetime. We also had a couple of couples from Grimsby way, a 69-year-old bike dealer from Newcastle, and a couple of Aussie old timers who’ve been mates for 40 years. Plus, tour guides Gary and Gladys who skillfully got us 2600 miles across Hicksville America and the Mojave desert. 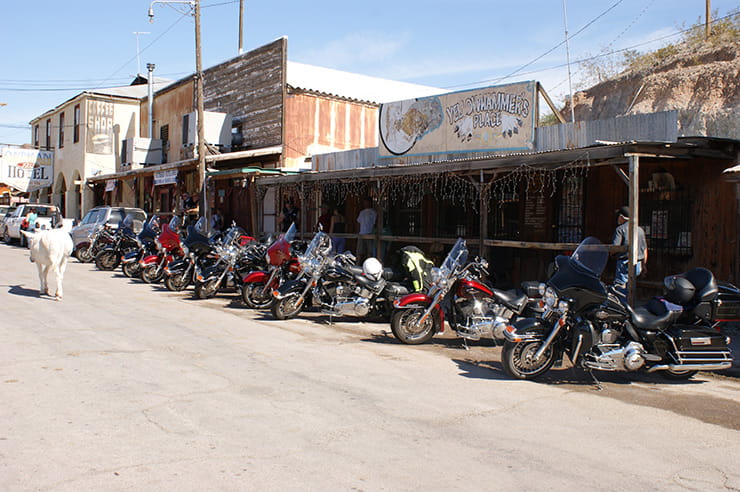 The traditional roadhouses and motels look cool, but trust me, after a ten-hour day in that much heat, punctuated by regular stops for fuel, food and a succession of Route 66 museums, what you need is dependable air-con, a pool and a quiet night’s sleep. What you don’t need is to switch on the light and hear the scamper of a thousand roaches heading under your bed. Our average daily ride was 200 miles and most of our hotels were Holiday Inn/Best Western type places. Cheap, but clean, dependable and perfect for a travelling circus of wide-eyed Brits. 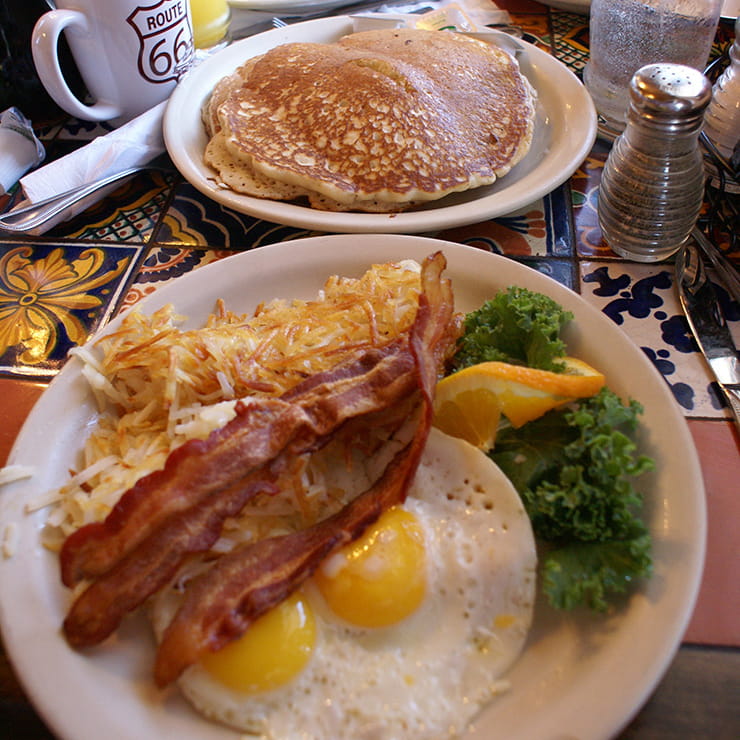 American portions are as big as the movies make out!

Everything you hear about American restaurants is true. And in the deep south it’s a double-sized dose of colonic devastation. Don’t leave your helmet near the kitchen or they’ll deep fry it. There are healthy options - you can have your two kilo burger without the deep-fried bun, but until New Mexico, you’ll struggle to find anything healthy that isn’t a side salad. Price on the menu is cheap, but you have to add tax and at least 20% service, making it pricey per portion (except that one portion feeds two people so be smart and order accordingly) 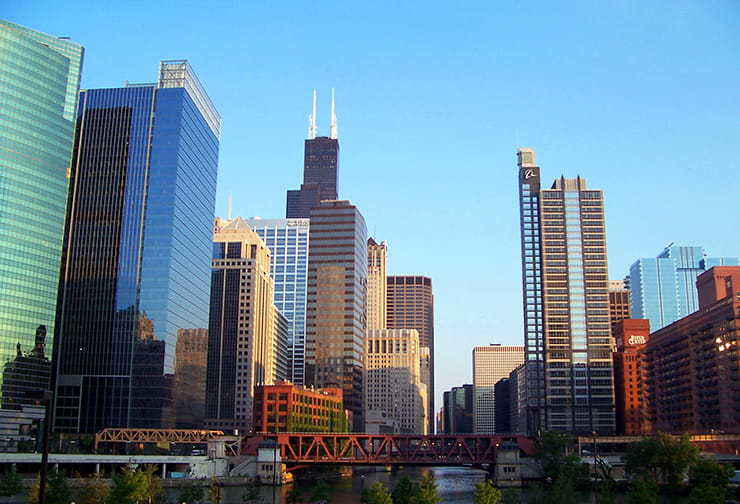 9. This is so much more than a road

I went on this trip knowing nothing about Route 66 and came away with a new found respect for ordinary backwater Americans. It’s like riding from London to Istanbul and still having another 500 miles to go. Think about the differences in cultures on that journey and you can start to understand how much you’ll see in 15 days on Route 66. Once in a lifetime doesn’t begin to describe it. 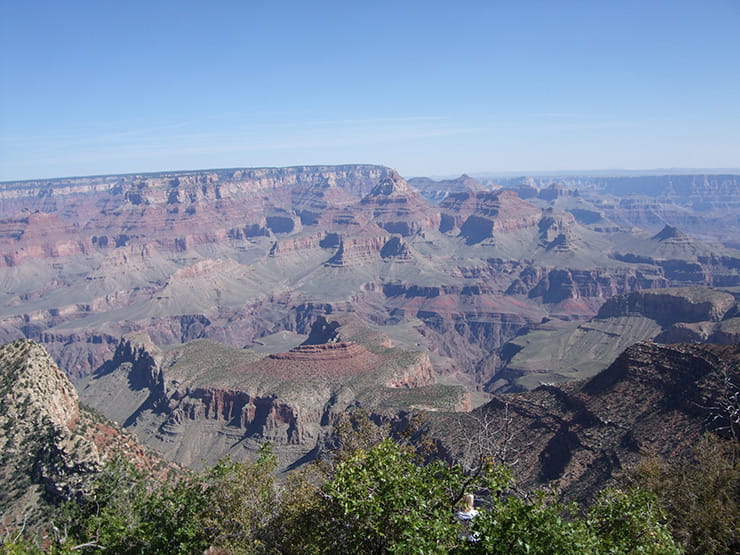 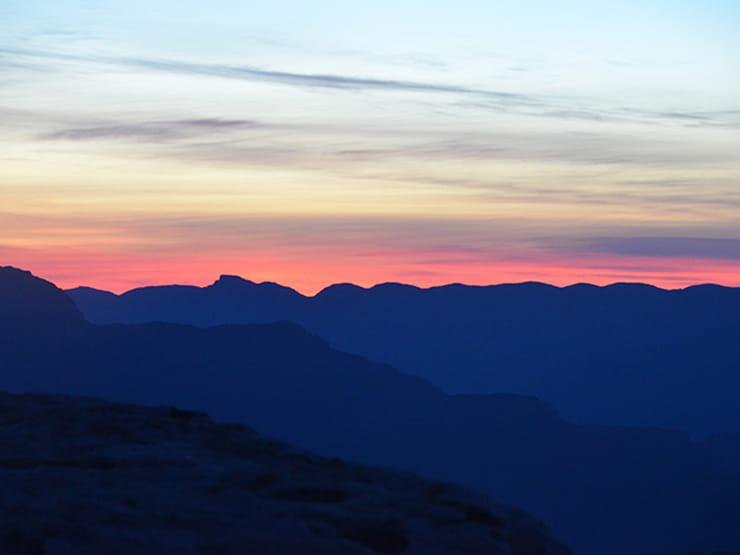 Stunning views and an amazing road at the Grand Canyon

10. There are no words or pictures that can describe the Grand Canyon

So I won’t even try. Everything you think you know falls flat when you actually see it. And the road around it is one of the riding highlights of the trip. Don’t feed the rattlesnakes…. They’re fat enough already. 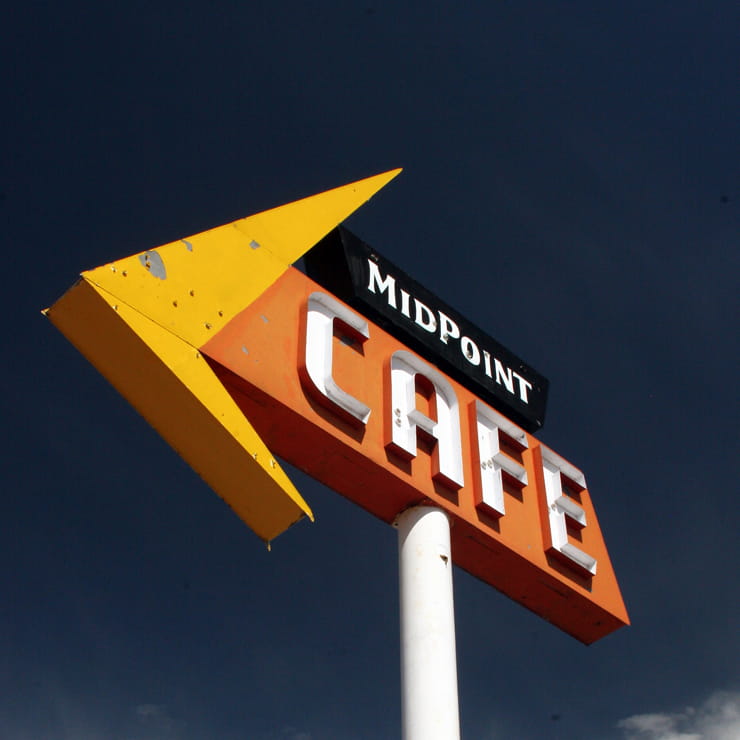 11. American drivers are polite and considerate

And when you’re riding at 80mph in t-shirt and jeans you’ll be thankful. Out in the sticks, it’s embarrassing how much better they are than us. American traffic laws are strictly enforced and for such a big place there are an awful lot of cops. So people respect the law and drive smartly. 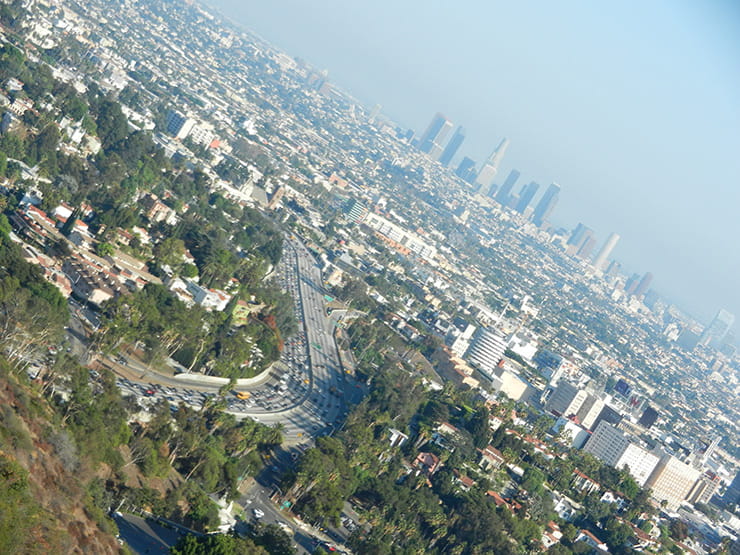 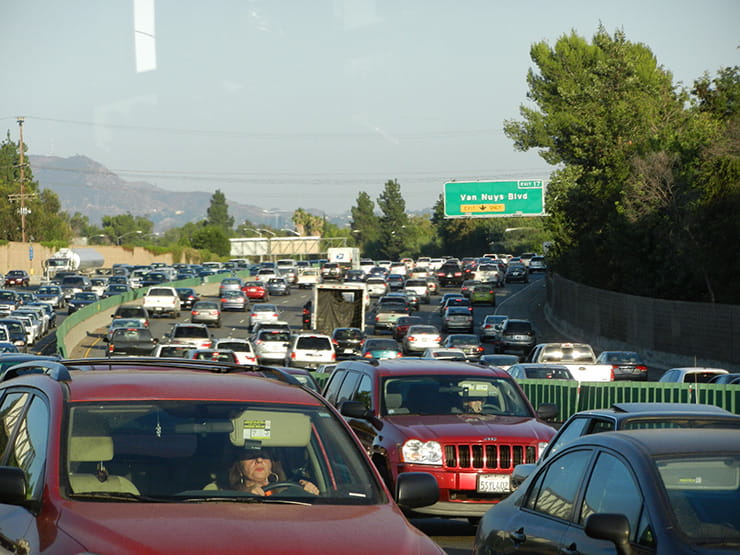 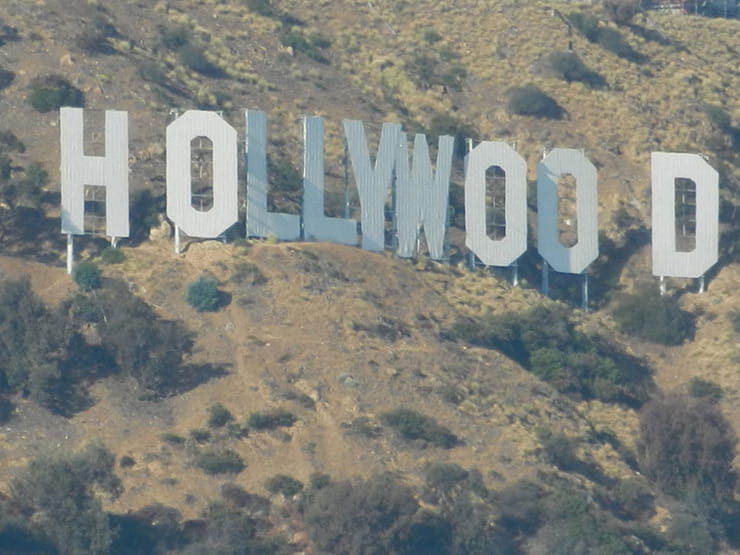 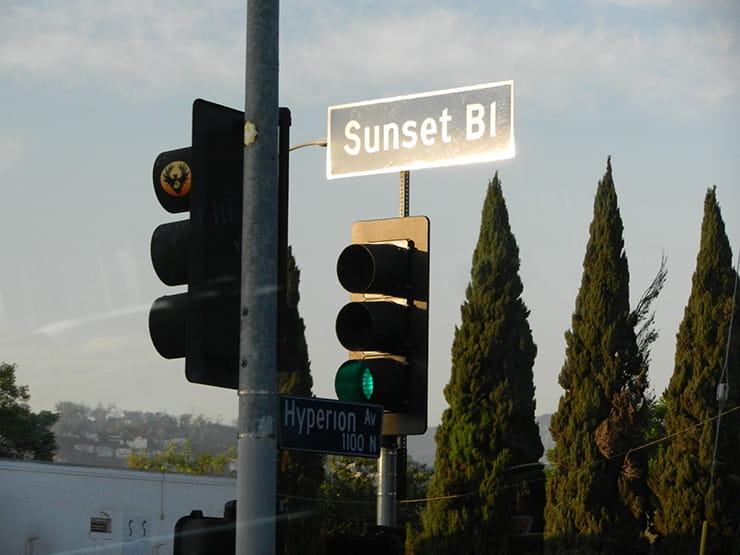 LA's five-lane freeway is invigorating on a motorcycle

Multi-lane high speed freeways with overtaking allowed either side and at least half of the drivers apparently on very strong medication. Los Angeles is like a five-lane version of the M25 at 90mph. It is one of the most invigorating and challenging places to ride a motorcycle. Treat it with respect and enjoy the experience. 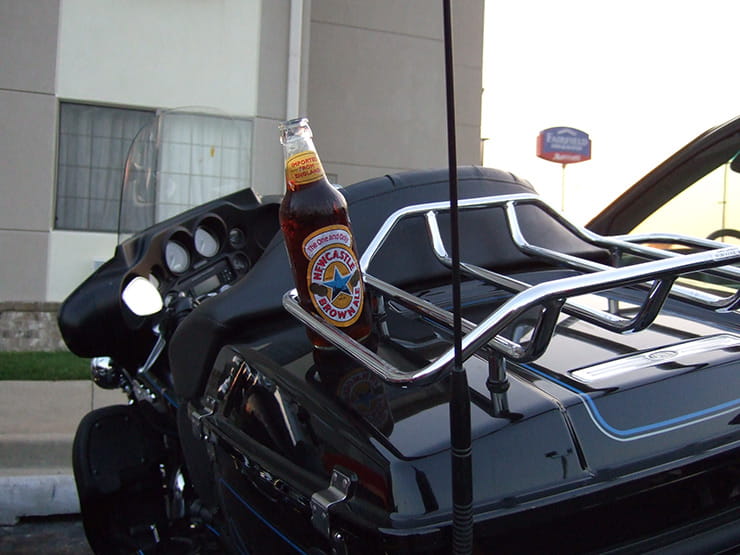 The last day. Two hours battling LA’s insane driving. Your life in your hands, heart in your mouth, clichés in every sentence and Born To Be Wild on the iPod, The Hollywood sign is way in the distance, maniacal cars cross all five lanes of traffic at the very last moment to hit the exit ramp at 90mph. There’s an orange haze of smog above you and your body is on fire.

And then, a small crest and a blast of cool air. Fresh air. Hello Pacific, hello Santa Monica, we made it. The emotions are strong, the handshakes and backslaps are genuine and heartfelt. There’s relief, pride and sadness because now we have to go home. 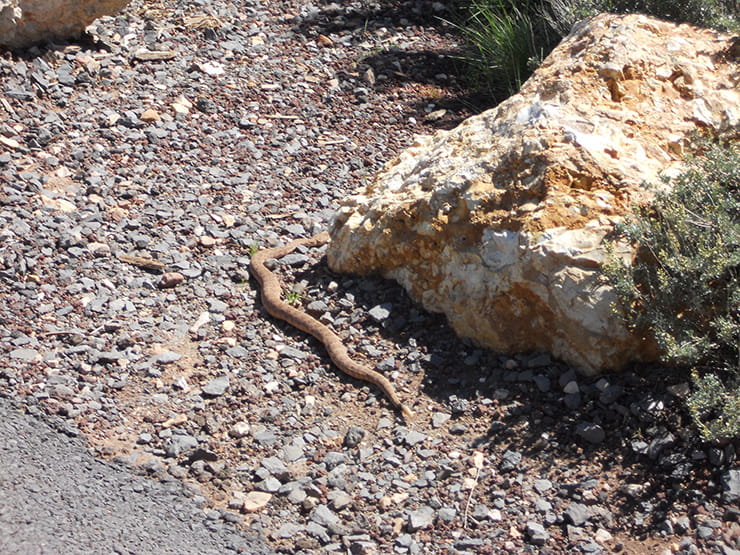 14. The wildlife is wild

The rattlesnake signs started in Texas, Tarantulas in New Mexico and scorpions in Arizona. Mountain lions in the Grand Canyon, vultures all over Texas and Black Widows in California. We came, we saw, we all survived. I’m scared of wasps, but I found this fascinating and exciting. 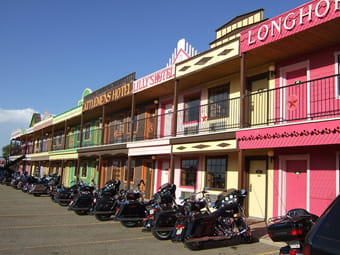 The only requirement is a large chunk of cash, a bike licence and a very open mind, because, as we said up top, Route 66 is so much more than America-by-numbers. Some of our party had been riding for 40 years, others for less than two.  Some rode 30,000 miles a year, for others it was their longest trip for five years. The skill of our guides us safe; always looking out for us, always ready to help but never too intrusive. It’s more about mindset than riding talent. Most of the road is quiet and safe, apart from LA which is the complete opposite. But by the time you get there, you’re at one with the bike and riding better than ever. 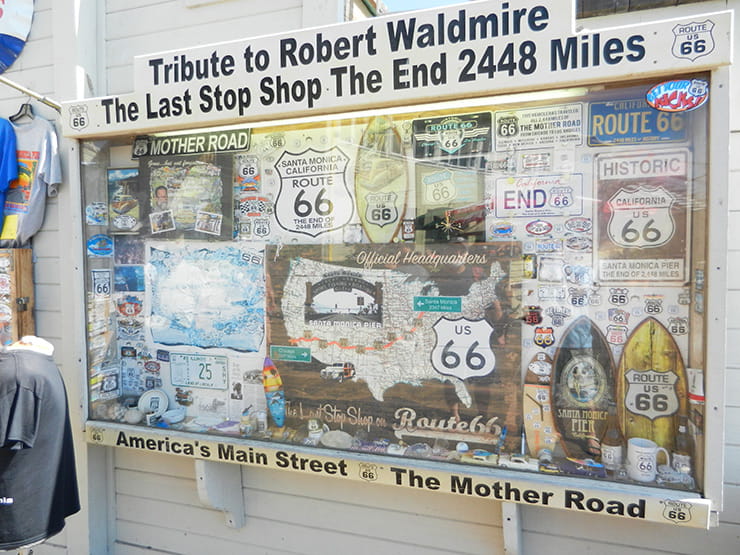 How we did it

Our tour was organised through Orange and Black Motorcycle Tours. The 15 day trip (prices correct as of Feb 2019) is £6475 for one person in their own room, but most people go as a couple, sharing a room if not a bike. Two people on one bike, sharing a room costs £4095 each. All prices include bike hire, insurance, hotels and fuel, but not flights, food or travel insurance (with cover for motorcycle accidents). Flights and the health insurance add another £700(ish) each and you’ll need at least £500 each for food, beer and a suitcase full of Route 66 t-shirts and nick-nacks. Compared to two weeks in Benidorm, that’s a lot of money, but for a genuine once in a lifetime experience, it’s a bargain

Known as The Mother Road or The Mainstreet of America, Route 66 runs (or should we say ran because, officially it was declassified in the mid 1980s) from Downtown Chicago to Santa Monica Pier in Los Angeles and was built by combining dozens of minor roads in the early part of the last century. Much of the route follows the tracks of early American pioneers heading west and the legend of Route 66 was made in the great depression and dustbowl famines of the early 1930s. Millions of migrants fled west on the route, looking for adventure and whatever came their way (sorry).

Route 66’s heyday was the 50s and 60s. A glamorous parade of motels, diners and art deco gas stations that kept America moving. Every small town cliché is to be found here... if you look hard enough, because most of them are decayed beyond salvation, home only to snakes and spiders these days.

It died in the 1980s as the freeways bypassed old-town America. But in the last few years America has discovered nostalgia and Route 66 represents an alternative to the corporate, an alternative to the ‘faster, faster’ society and an opportunity to travel at your own pace and appreciate the journey as well as the destination.

Route 66 is not the most scenic tour of America and definitely not the most glamorous. It will change your view of American culture and help anyone understand why the most advanced civilization on the planet can also behave like a bunch of backward hillbillies.