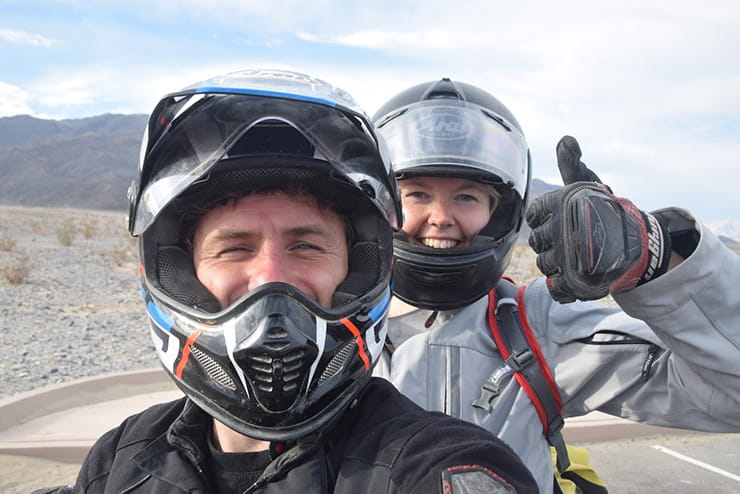 In the first of a series of features documenting the planning, preparation and execution of a trip to Iceland, we start with an overview of a trip that overland traveller Nathan Millward is embarking on this summer, taking his own bike over to Iceland on what will be a three week trip. We'll look at bike prep, planning, documentation, costs and how to make the most of your time while you're out there.

Iceland is about the same size as the UK, with a population of just 330,000. As a result, there's a lot of empty space to roam free on a motorbike. The routes are mostly paved around the perimeter, with a network of wild and scenic gravel roads and trails criss-crossing the interior. It's those I'm looking forward to exploring the most, with some stunning videos out there showing the best of it…

Laying 500 miles to the north of Scotland, Iceland's not the most accessible place to get to, especially not with your own bike (see below), but in terms of a manageable adventure – something you can do within a reasonable amount of time and money – then it still holds huge appeal. It's also a great place to consider whether you're riding solo, in a group, or two-up with your partner.

How do I get there?

Until 2008 there was a ferry from Scotland to Iceland, via the Shetland Islands, but that stopped running due to a lack of demand. This leaves just two options if you want to ride your own motorcycle there: sea-freight the bike using a company called www.eimskip.com, who operate out of Immingham on the North East Lincolnshire coast, or take the weekly vehicle ferry with www.smyrilline.com from the top of Denmark, arriving two days later in Iceland.

Both options work out about the same cost, once you've factored in the price of your flight to Iceland if you're sea freighting your bike (you're not allowed to travel on the cargo boat), or you've taken into account the cost of travelling 800 miles in mainland Europe and catching the ferry from Denmark. Both routes work out at around £1200 return. You can also rent bikes on the island and enjoy guided trips. But solo on my own bike is what I generally prefer.

For this trip I'm going be taking the ferry from Denmark; riding approximately 1000 miles from my house in the UK, up to the Danish port town of Hirtshals, in two and a half days. I plan to cross from Dover to Calais by ferry and have picked this option as I think it'll add to the experience, spending two days at sea, stopping off at the Faroe Islands on route, before riding off the ferry in Iceland and getting straight on with the adventure. Alternatively, if you're a bit stretched for time and only have two weeks total, then you might be better off freighting your bike into the country and flying in. 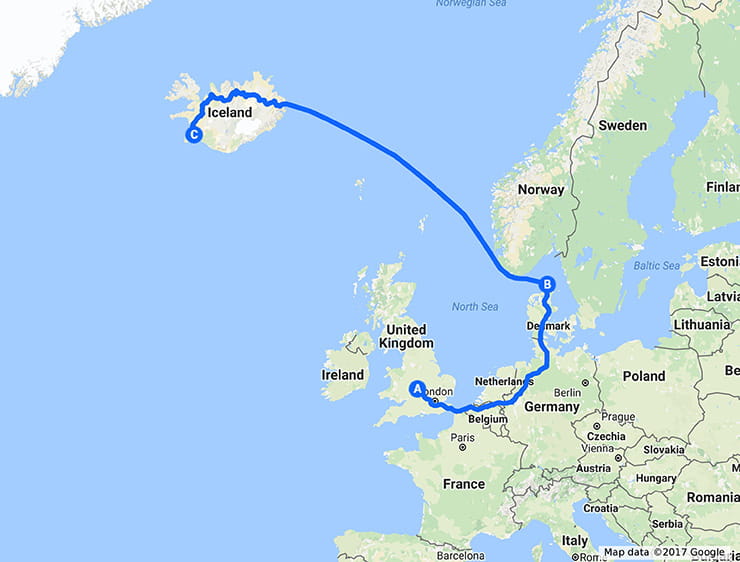 A total of three weeks will be spent in Iceland. Two of those I'll be riding solo, but for the week in the middle my wife is flying out to me and we're going to do a stretch of it two-up. This has been a good compromise as she's not been able to get the time off work, but in being able to fly out for a week she'll still get to experience the more accessible sights around the exterior, leaving me with the solo time to explore the more remote interior routes.

The daily budget for the trip is £50, which doesn't go a long way in Iceland. To keep costs down we'll be camping most of the time. Campsites cost about a tenner, but in Iceland, much as it is in Scotland, you can wild camp anywhere, as long as it's not in the immediate vicinity of someone's property. There are bunkhouses, hostels, homesteads and hotels dotted around the island, averaging anywhere upwards of £100 per night for a private room.

We'll cook on the stove and pick up food at supermarkets and shops along the way; as with most trips, it's alcohol and restaurant meals that really bump up the price, so we'll have to keep those to a minimum… Dried pasta and porridge oats aplenty. 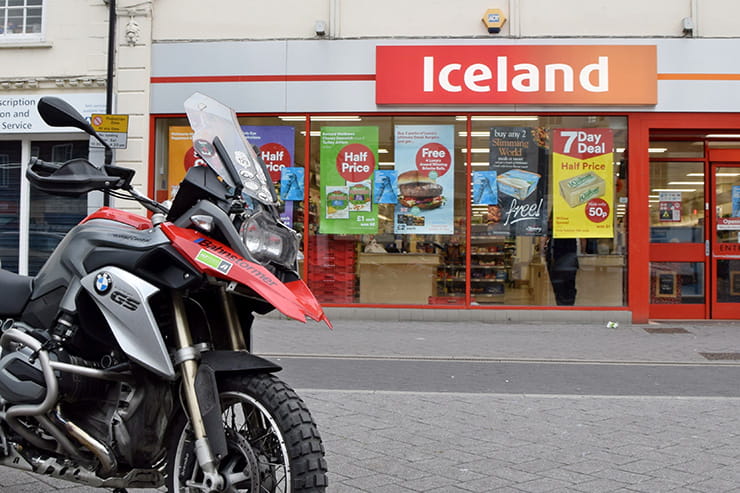 The Bike I'll be taking on this trip is my 2014 model R1200 GS. It's done just over 20,000 miles and was previously used as a BMW Off Road Skills Bike. Back in 2015 I flew it into America, and together with my wife in the pillion seat rode it from Las Vegas to New York. I now use it for a mixture of road touring, commuting and green-laning.

It's a standard model, fitted with AltRider crash protection and a Rallye-style bench seat. It also has Cymarc screen struts to keep the screen rigid when off-roading, and is currently running Michelin Anakee Wilds, which offer excellent off-road grip and have also lasted over 5000 miles to a rear. I'll be running another set for Iceland as they’ll last the distance and give good traction on those interior dirt and gravel roads.

The bike will be serviced before the trip and given a good check over. BMW breakdown cover won't stretch to Iceland, so you're pretty much on your own once out there. We'll look more at what equipment to take, but with modern bikes, other than puncture repair kits, there's not a lot you can fix with basic tools and facilities. There is a BMW dealer on the island should bigger things go wrong.

If I was riding solo the whole time I'd look at taking something smaller and simpler, such as a single cylinder 650cc trail bike. But it's a compromise. With a thousand miles to and from the port in Denmark, and then with some parts of the trip ridden two-up, a bike that can carry all the gear and do the miles in comfort is no bad thing. If you had the time and were in no rush then a small-engined bike would be a perfect way to way to explore. Likewise, if you stuck to the Tarmac and compact gravel roads around the exterior, there's no reason you couldn't bring your sports-bike or cruiser.

I'm generally one for leaving things to chance, and with Iceland, especially with the flexibility of wild camping, the preference for this trip is to not plan things too extensively. In the weeks building up to the trip it's a case of researching the places on the map that might of interest, or the roads that are recommended to ride, and forming a rough route in your head, but stopping well short of a strict time-frame and itinerary you're hoping to stick to. As with any trip – unpredictable in their very nature – this can put too much pressure on you, and stops you from being flexible to the things happening around you. But there is no right or wrong way. Do what feels right for you. Alternatively, if you're new to all this, you could consider taking one of the guided tours with the island's well recommended Biking Viking bike rental and tour operation.

The plan is to not ride more than 150-200 miles per day. This seems to be a good distance for making sure you have time to stop and enjoy the scenery and not feel like you're in too much of a rush. When riding two-up, it might be even less... I can’t wait! 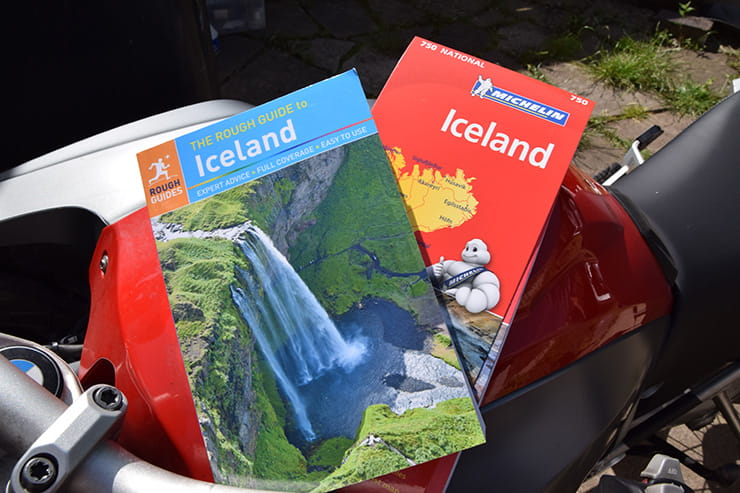 Things to consider when planning any big trip