Tour on any bike | 5: Tools and spares 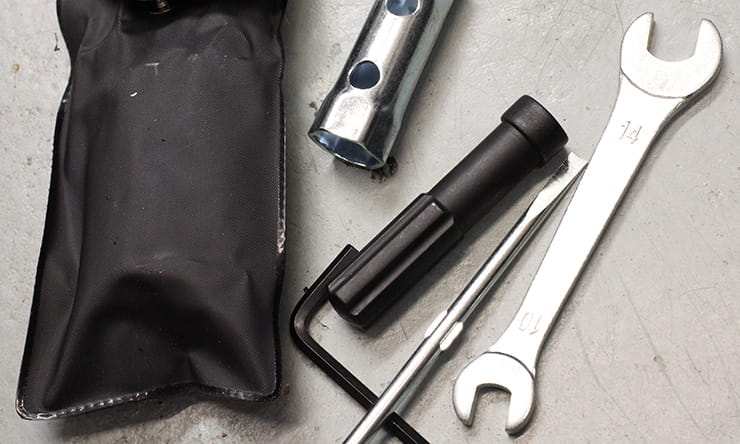 Only take what you know how to use. Anything else is redundant.

Basic things like tubeless repair kits (or inner tubes and tyre levers if running tubed tyres), and tools to fit the bike's most common fasteners and bolt heads are the bare essentials for any on-bike tool kit. And don't assume the tool kit that came with the bike has all of those things; often they're generic kits issued by the manufacturers and missing vital instruments for even the most simple of jobs. A mini compressor is also handy but don't go overboard if you don't have the space. A simple hand pump, while harder work, will deliver enough air to limp the bike to the nearest petrol station air-gun.

It's the same with spares when it comes to packing a minimal amount. You simply can't take everything and nor do you need to. If something catastrophic happens with the bike – such as engine failure – then you're stranded and in need of third party assistance whether you have the right parts or not. There's a limit to what you can do by the roadside so be realistic; if you don't know how to use the tools you're taking, or fit the spare parts you're carrying, then there's no point taking them – they're just adding unnecessary weight and taking up space.

With consumables such as tyres, chain, sprockets and brake pads then the best thing is to make sure they're all up to the job before setting off. Make sure there's enough tread left on the tyre for the anticipated distance to be covered, that the chain has plenty of adjustment in it and that brake pads have plenty of wear left. It might be wise to change all these before setting off on a big trip. The same goes for the wheel bearings and anything else that can have a habit of failing.

The main thing if things to go wrong is not to panic; as tricky a situation might be, there's always a way out of it. There's always a local workshop and a means of ordering parts in.

Obviously breakdown cover is a good option for those who want the back up of an emergency number to call and a tow truck to take them home. Try not to use this as an excuse though for not carrying out proper maintenance or using your initiative if you do break down. Trips have commonly ended prematurely – bikes taken home on the back of low-loaders – when, with a bit of thought, people could have got their bikes sorted and continued with their trip.

If you’re concerned about the basics, such as fixing punctures, then consider having a practice at home. Take your wheel out, then learn how to lever a tyre off and put on a new one. It’s the same with changing the plugs, adjusting the valve clearance or even simple things like topping up your coolant level, which can often be a swine to do if you've not tried it before.

Finally, spare bulbs – especially for the rear – are worth carrying (unless your bike has LED lighting). But most of all, as well as spares and tools, take your wits and common sense, as they will often prove much more useful in a roadside emergency.