Tour on any bike | 4: Clothing 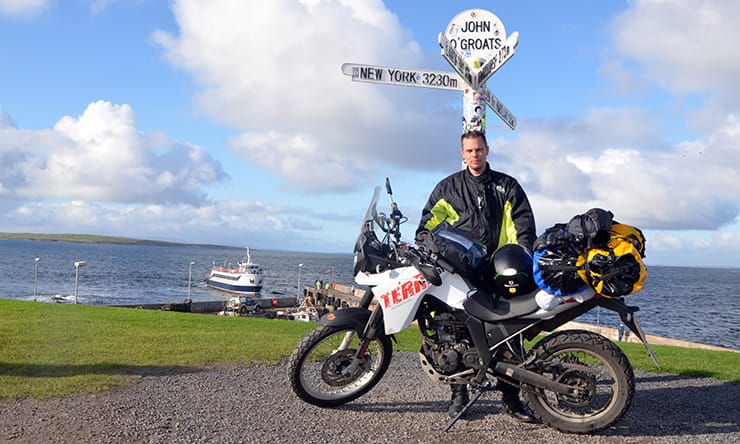 Think carefully about the clothing you're going to take. Obviously you need your riding gear and enough versatility in the clothes you take to deal with changes in temperature and weather conditions – you might need extra fleece layers, warmer socks and long johns. But consider what you might need off the bike too. If you're staying in hotels and heading out for dinner then you might need a nice set of clothes, shoes and a casual jacket. If you're camping or hostelling then do you need a pair of jeans, casual shoes and other things? Possibly not. Again, depending on what type of travelling you're doing, do you need a new change of underwear every day, or can you stretch it out to two or three days? Even the most hygienic of people I've known are amazed at how care-free they become when travelling day after day on a bike. For those who do wish for a daily garment change then a good tip is to roll it up into daily bundles; ie pants, socks and t-shirts rolled together, so they're easy to grab as a package. Don't forget you're also going to need somewhere to pack the dirties.

In terms of riding gear, arguably the most important part of it is your riding boots. Are they comfortable, are they waterproof? Good waterproof boots are the difference between a content day in the rain versus a miserable one. The worst thing at night, especially if you're sleeping in a tent, is having to be in there with a pair of sopping boots that you know you're going to have to put on wet in the morning.

Cheap boots can be remedied to a large extent with waterproof socks, but you still have a cold wet inside of your boot to contend with. Conversely, a poor quality jacket and trousers – in terms of waterproofing at least – can easily be remedied by cheap waterproof jackets and trousers, with army surplus stores a good place to try for cheap Gore-Tex equipment. Even the popular three-layer textile jackets – often with the waterproof liner inside the outer layer – are best complemented with a cheap and durable exterior waterproof cagoule as the outer doesn’t wet out. This is the advantage of laminated Gore-Tex, but that does tend to be more expensive. Again, if you're camping and the outer layer of the jacket has wetted out then it's not going to be much fun putting it on again in the morning.