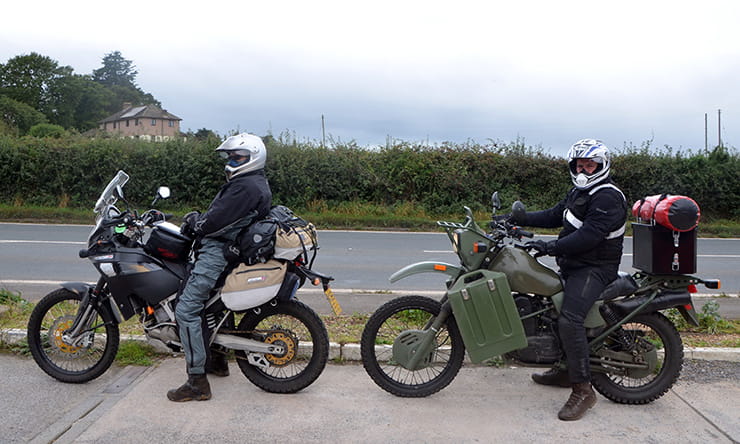 Some bikes are built for carrying luggage and come with either hard panniers or top box built in, or are at least designed to take it. There are many benefits to hard luggage, such as the aluminium panniers you see on many large capacity adventure bikes these days – they're generally waterproof, relatively secure as uou can lock them, and offer a good amount of storage space, not to mention a degree of crumple zoning should you and the bike go down the road. The downside is they are often wider than the bars, making filtering difficult. They also add a lot of weight in terms of the panniers themselves and their frames, and in some circumstance – such as off-roading – they can lead to ankle breaks if you catch your leg underneath them. They're also quite expensive and aren't suitable or available for all bikes, and unlike soft luggage, can potentially crack in a crash.

If hard panniers are for you then ask what you want and what you want to pay. Ideally you want something that can withstand a drop or at the least be easily repaired. Most panniers come in various sizes or litre capacity – don't necessarily jump for the biggest. Consider what you want and where you're going. The Adventure Bike shop is a good place to see a selection of panniers and their mounts in person.

Soft luggage is the other option, with a good variety of throw-over saddle bags available. There aren't often waterproof, or are only made so by means of waterproof covers or liners, which themselves can take up a lot of room. They're also easier to break into and aren't usually as spacious as metal panniers. The Adventure Spec Magadan panniers have more space than most but there you have the same issue as with all soft panniers; attaching them securely; keeping soft bags away from wheels and exhausts is the biggest trick and the hardest battle – soft luggage frames are the best idea but aren't available for all bikes, often requiring a DIY job. The throw-over system can also foul the pillion seat.

Kriega has a range of very good solution that secure to the pillion seat, tank, sides or with racks on which the luggage attaches directly to them. Mosko Moto is a US company newly launched in the UK that also offer a range of soft luggage solutions. Alternatively, if you're on a budget, seek out your local army surplus store as they often have cost-effective solutions.

Aside from panniers, the other option is a top box. Some swear by them, citing their handy and secure storage, as well as giving the pillion rider something to lean against. Others avoid them for upsetting the stability of the bike and aesthetically looking cumbersome. A good old dry bag is an alternative; cheap to buy, with Aldi and Lomo two good value options – various sizes are available. Get one of a good size and you can travel a week or more with just that and a tank-bag. Being the shape they are they're also good for stowing tents and other camping gear. Just, as with all soft luggage, make sure things are securely strapped down and that strap ends are tucked in and well out of reach of hot exhausts or spinning back wheels.