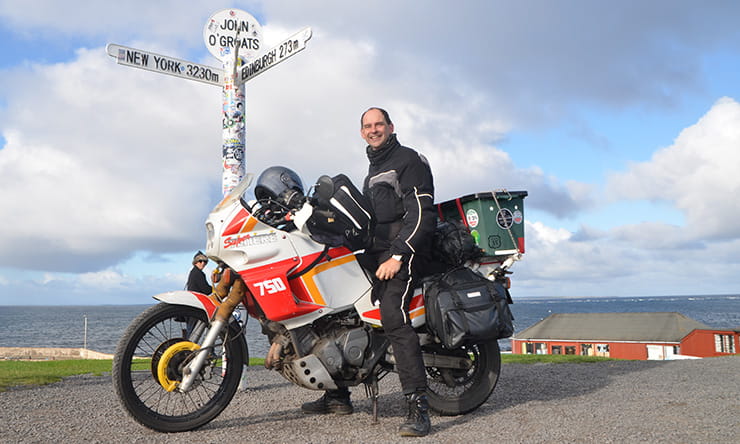 Having originally planned to do the trip on a Honda Innova 125 that sadly didn't make the start line, I had no idea that I would need to take the Yamaha, which was a big risk as it was due a service and a new set of tyres, but I didn't have time to do either. At least it had a full tank of fuel and the tyre pressures were fine. I then had to spend about three hours building a new waste pipe rack to support my recycled top box, which I didn't even have time to test.

The Super Ten was good as it could carry plenty of luggage. I have used it for travel around Europe so knew it would be fine if it kept running. Cold, wet weather is not good for the poor old thing and getting going in the morning proved rather challenging. Not so bad when there are other Garbage Runners to give you a bit of a bump start, but more stressful when riding the length of the UK on your own afterwards.

The luggage was a mix of tried and tested and new inspiration. The saddle bags and tank bag have been used on multiple trips, as had the yellow duffel bags that were held on using cargo nets bought on trips through America and South Africa. The idea of using my green recycling box as a top box came from my last trip in South Africa riding an old SR250 delivery bike. This had an even larger box fitted to a special metal rack but had proved good for carrying most of my kit.

I took a new air mattress as I had discovered that my original was punctured. This proved perfect as the ground sheet in my tent has holes in it. I think it may even have kept me afloat when camping at Applecross.

I think I could have done without the telescope as the Puffins were all away at sea. Some of the cooking equipment ended up not being used as it wasn't really outdoor cooking weather.

I would get 'bike 1' serviced and fully tested before trying to set off, or have 'bike 2' serviced and have new tyres fitted, just in case bike '1 fails'!