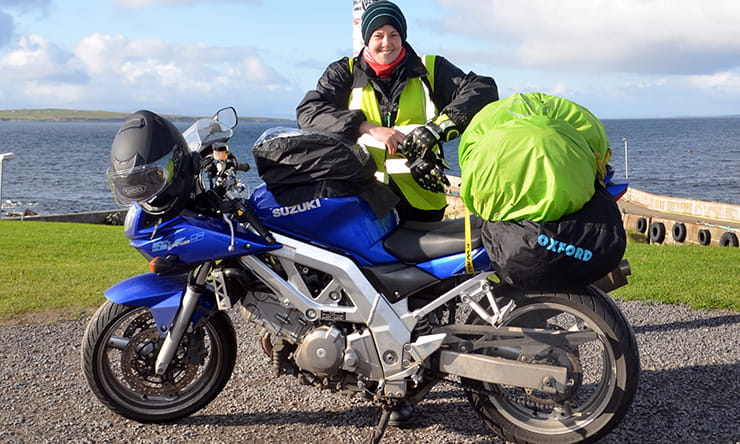 I started the trip on a 30-year-old MZ ETZ 251 that I'd bought specifically for the journey – it was reasonably priced and wasn't too far away for a test ride; it seemed to fit the bill quite nicely with a 243cc engine with 22(ish)bhp. The two-stroke mixing system was straight forward, it had a large, comfy seat with an upright ride position and the ability to just about pull along at 60mph. It was great, until it faced very heavy rain, conked out several times with a splutter and a loud bang, then point blank refused to play ball despite receiving a lot of mechanical attention at the roadside.

Thankfully I was close to home so went back and swapped it for my Suzuki SV650S, which I knew could handle long distances, although I had never done more than one long days' ride at a time on it. It turns out that it was a blast and handled everything that came its way with plenty more left in the tank. It also had fresh tyres, which made a massive difference to how the ride was a few weeks previously.

I thought that by having a more sports than tourer riding position, the SV probably wasn't the best bike for the job, but I was wrong. Despite feeling a bit cramped after a couple of hours of tucked up riding, a stretch/rest stop made all the difference. I'd used it previously to commute around London, which I found quite useful, and tough. After a few days of solid riding I felt right at home on it. Mine is the bikini faired model, so there wasn't much in the way of protection, but good waterproofs and thermal leggings kept out most of the wind blast. The SV is much heavier than the MZ (which did get blown around in the slightest gust) so while it was sometimes tricky to manoeuvre in tight hairpins, it felt much more sturdy and stable overall.

I used two Oxford panniers, a 70L North Face waterproof duffle bag and a tank bag. Everything was either strapped down or magnetic.

I used what I already had to hand. The duffle bag took the bulk of the luggage (sleeping bag, tent, clothes etc) the panniers took the heavy items such as tools and liquids (GT85/oil etc). The tank bag was used for quick-grab bits and bobs like my spare gloves, neck scarf, snacks, map, phone charger etc.

Good waterproofs! I took a second set just in case but they weren't needed. Also, a decent sleeping bag and something comfortable to sleep on, as well as dry shoes, and cold hard cash as well as cards; one garage we visited was based on honesty and we had to tell the cashier what our spend was. I also took a hydration backpack so I could take a drink once I was all kitted up. Oh, and snacks. Always handy.

While transferring from the MZ to the SV, I ditched a lot of stuff including the oil, other fluids and a lot of the tools/repair kit I'd packed. In the end I just took the standard tool kit that came with the SV, a can of chain lube and GT85. The tool kit came out once to help another bike. I also swapped my tent for a lighter one that I also owned. It turns out I didn't use the tent or sleeping mat once, as all the campsites/areas we stayed at had optional accommodation upgrades, but it was definitely good to have to hand.

I’d definitely keep to modern four-stroke bikes! I'd also install heated grips and after talking to a lot of the other riders, a heated jacket seemed like a great idea. I was surprised at how warm and dry I was with just a textile jacket and a waterproof outer jacket, but I think when the weather's throwing everything it can at you, just little extra comfort might just be the lift to keep you going that little bit longer