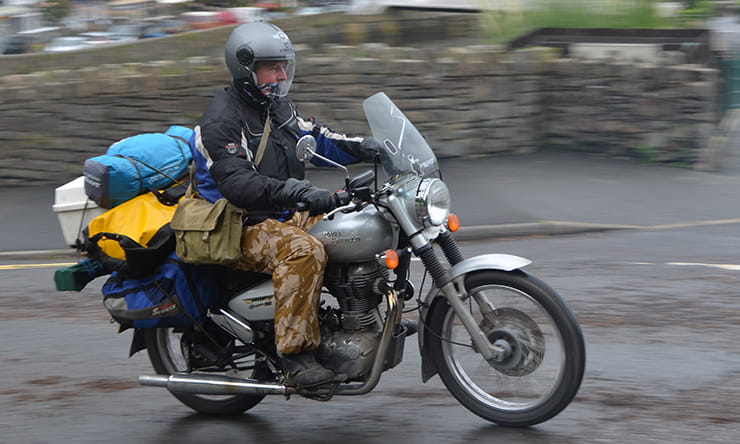 I have a few bikes I could have used but the 500 Enfield was the closest I have to what I understood the nature of the run to be about, ie something smallish but reliable and not a fancy tourer.

I found it completely suitable for the type of terrain and speeds we were doing. The low seat height and lots of torque from the engine were perfect for the hills, with plenty of engine braking for the drops. The downside was that it's not really up to carrying all that weight on the back, so the steering was very light, which caused a few scares on tight bumpy left handers. Less weight and uprated rear shocks would have been of benefit.

Stuff I already had, so throw-over Oxford bags, a Rickman Honda 90 top box, a large dry sack, plus the tent in its bag.

It was stuff I already had and I couldn't think of anything more suitable. It was all tied on with bungee cords, so taking it on and off was easy.

The tent and a three season sleeping bag, clothes and washing kit, plus spare cables and inner tube etc for peace of mind.

Half of the clothes, the cooker and gas, the extra sleeping bag and the tent was too big.

Put more stuff into the throw-overs and eliminate the need for the top box. That would keep the height down and hence the centre of gravity. I would probably fit adjustable Hagon shocks, wear fully waterproof clothes and buy some really good waterproof gloves.