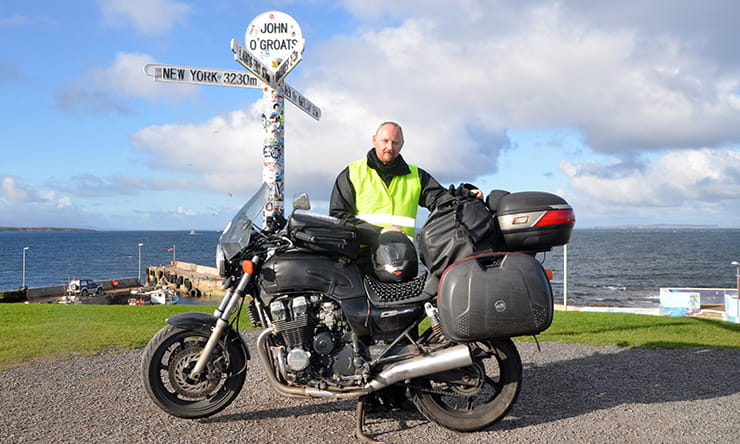 It’s the one I have. The best bike to go riding is the one you have.

It was surprisingly adequate, although I missed a sixth gear on the motorways. My trip was substantially longer than just the Garbage Run as I had to get there and back again from Trondheim in Norway (I racked up a grand total of 5236 miles on this trip). On the run itself it was big and powerful enough to easily carry my gear and me. And nimble enough to do all the small roads.

I used Givi hard-cases and a dry-bag from Bags-connection on the pillion seat with all of my camping gear in it. It was the first thing off the bike and the last thing put back on it. I also had a tank-bag from Bagster, modified with power into it from the bike to charge my phone and power bank.

The Givis were already on when I bought the bike. Since then I’ve bought inner bags, so basically you pack them, and the bike is in principal packed – just put them in the panniers and you're done. The dry-bag was something I saw years back, and it fitted very well on this bike. It comes with a shoulder-strap, four strapping-loops and four adjustable straps with a carabiner that attaches to the bike-frame. Unloading is a simple matter of loosening the straps a little, then clicking off the carabiners, which takes seconds. The tank-bag was something I stumbled upon second-hand, and just grabbed on a whim. In hindsight I would like to have a smaller one. Too much stuff accumulated in that thing over the trip and it got a bit messy in there.

Woollen undergarments (and electrically heated clothing from Gerbing). You can of course manage without the Gerbing kit, but it meant I was warm whenever I was on the bike. I believe it makes me a safer rider over time as it takes much longer to wear down a biker who isn't frozen!

I think there are quite some possibilities when it comes to stripping down my cooking-gear. I have a bag that all the utensils have been thrown into over the years – I just brought that and realised that it was a bit cluttered in there. Next time I’ll have a thorough revision of the thing, and probably get rid of some of it. I also brought a book, but didn’t read one word of it.

I’d bring more paper-maps and some more things to take notes on. Paper maps are great when planning on the go, discussing routes etc. And things to write on are great when you do some 'anlogue navigation'. A sat-nav doesn't take directions from the guy you met on a street corner. Having a piece of paper on the tank-bag is much easier when you need to find that place that the farmer or inn-keeper just told you about.

Also, I would use a trick I used on my electronics for other things: a zip-lock bag with a sachet of silica gel in it to keep everything functioning. I realised that I should have done that with my first aid kit when I got home as well; that and my now rusty tools! A plastic folder with the aforementioned paper maps and some desiccant would be something I’ll do next time, especially in such wet weather as we had on the trip.