How to tour on a motorcycle in Ireland 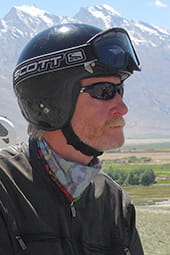 Geoff Hill is a critically acclaimed bestselling author and award-winning feature and travel writer based in Belfast. His 15 books include accounts of epic motorbike journeys Way to Go, The Road to Gobblers Knob, Oz and In Clancy’s Boots, recreating the journey of Carl Stearns Clancy, the first person to take a motorbike around the world 100 years ago – complete with Clancy’s original boots. His novels are Angel Street, Smith and The Butler’s Son. 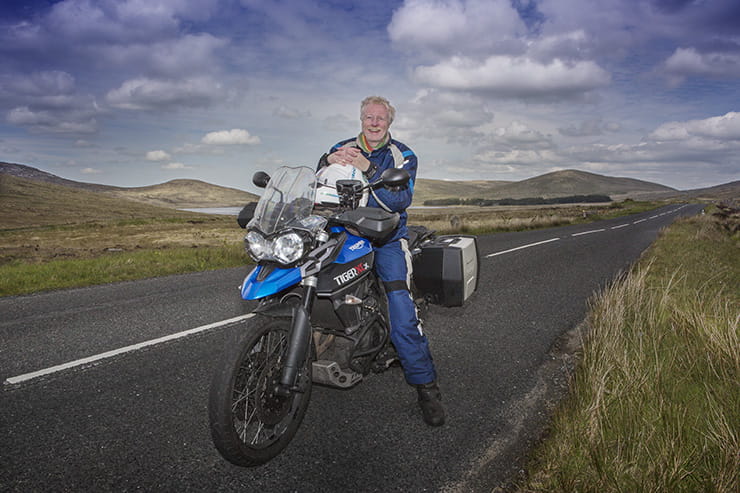 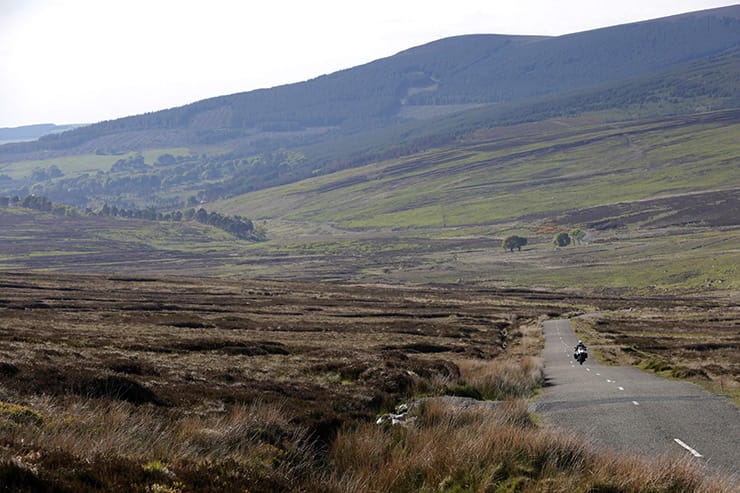 If you’re wondering which clothes to bring to the west of Ireland, the answer is all of them.

You may have been fooled by tourist board photos of Kerry teenagers sitting outside a pub in T-shirts enjoying the gentle caress of hailstones on their forearms, but I speak from the experience of having gone out too many times under blue skies in light biking gear, then looked up in horror as the heavens emptied.

Mark Twain allegedly said that if you don’t like the weather in Ireland, just wait five minutes, and he’s usually right, but I still wake up screaming in the night with memories of a five-day trip up the Wild Atlantic Way along the west coast with biking buddy Peter Murtagh of the Irish Times.

Want to guess who hadn’t checked the forecast and set off with his waterproof linings safely tucked up in the wardrobe at home?

Want to guess how many day’s torrential rain we got? I’ll give you a clue. Five. Oh wait; except for the couple of hours when a howling gale blew the rain away. And me almost off the road several times.

Still, at least on the trip I heard the most beautiful words a woman’s ever uttered to me. Not: “I love you”. No, it was when we squelched into a hotel and the receptionist said: “We’ve got a drying room if you need it.”

She had me at drying.

How do I get my motorcycle to Ireland?

Stena Line sails from Cairnryan in Scotland to Belfast up to six times a day in two hours and 15 minutes, with fares from £42 for rider and bike one way, or from Liverpool to Belfast in eight hours once a day and once overnight, from £65.

It also sails from Holyhead to Dublin up to four times a day in three hours and 15 minutes, from £55 one way. 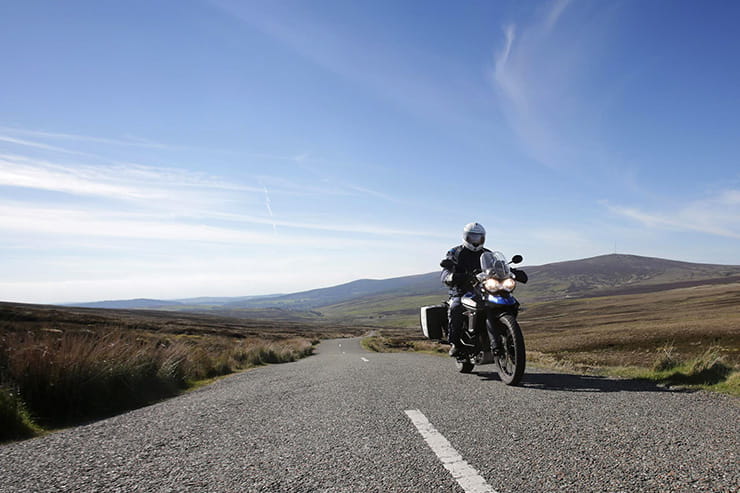 What are the speed limits in Ireland?

Since Northern Ireland is part of the UK, speed limits are the same as in GB. There are only four fixed speed cameras in Northern Ireland, all in Belfast – yes, you read that right – but they’re front-facing, so won’t pick up bikes.

There’s been a 20mph limit in Belfast city centre for over a year, but not a single prosecution for it. I’ve only seen one mobile speed patrol in Northern Ireland in the past year, but here’s a handy guide to where they operate: www.nidirect.gov.uk/articles/types-and-locations-safety-cameras

There are 45 mobile cameras in large white vans with broad blue and yellow stripes at 600 locations in Ireland, but I’ve never seen one in action, and again, they’re front-facing. Details at www.irishspeedtraps.com.

On the M50 – Dublin’s equivalent of the M25 – there are automated toll cameras, also front-facing.

In Belfast, bus lanes can be used by bikes, but not in Dublin, although many Dublin bikers use them anyway, and the police seem to turn a blind eye.

Where can I hire a motorcycle in Ireland or book a tour?

In Northern Ireland, former race ace Phillip McCallen – now the owner of a top Triumph, Kawasaki and KTM dealer in Lisburn, 30 miles from Belfast – rents bikes from £50 a day for a 125cc scooter, to £175 a day for a 2.3litre Triumph Rocket III, including comprehensive insurance, unlimited mileage and 24-hour recovery breakdown service. You can also rent all kit if needed. See www.motorcyclehireireland.com.

An alternative in Northern Ireland is Belfast Motorcycle Rentals in Moira, 18 miles from Belfast.

In the Republic, Celtic Rider, 16 miles from Dublin, rents BMWs, Hondas, Indians, Harleys, Indians and Yamahas from €135 a day including comprehensive insurance, 320kms a day mileage, helmets and breakdown recovery, with a minimum rental of three days, or six for Harleys and Indians.

Others worth checking out are Lemon Rock Tours, Rental Motorbike or, if you fancy chugging around on a Royal Enfield in tweed jacket with leather elbow patches while smoking a pipe, Retro Ventures. 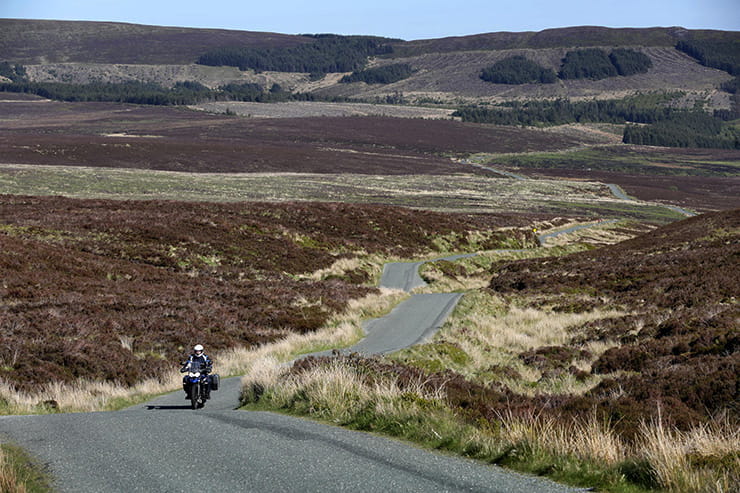 Am I insured to ride in Ireland?

Inside the EU, which we are still until March 2019, your normal insurance will automatically give you the minimum legal requirement in each country, although some insurers class the Republic of Ireland as abroad and do not offer cover as standard.

So check with your insurance company, and even if it does include minimum cover, think about extending that to include damage to your bike or theft for the period of the trip, and consider getting separate breakdown cover.

Are the Irish friendly?

You’ll find people in Ireland incredibly friendly, particularly in the south. On the road, they’ll generally pull over to let you overtake or filter, so acknowledge that with a cheery wave. I know Europeans stick a leg out, but to me that looks a bit like a dog cocking its leg at the nearest lamp post.

In Cork, the accent is so impenetrable that you may well need an interpreter. Just smile a lot and have another pint.

In the North, don’t bother asking anyone to explain the politics. If you understand Northern Ireland politics, you’re missing the point.

And if anyone mentions religion, just say: “I’m an atheist, thank God”, and order another pint. 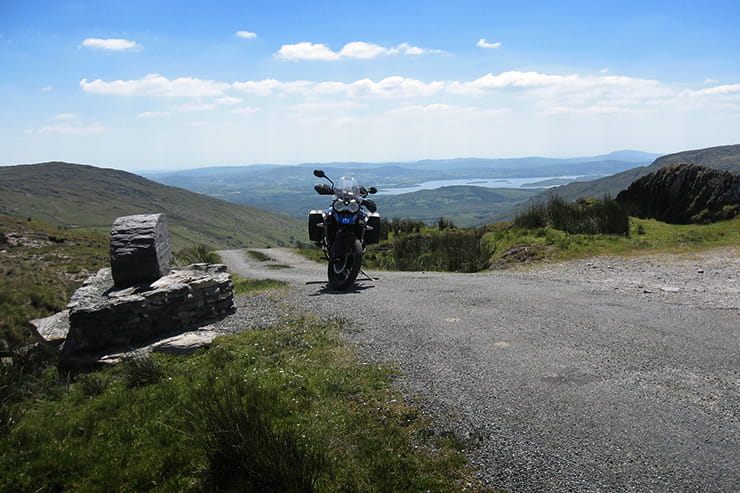 If you’re from England, you’ll be stunned by how empty the roads are, and they’re generally in excellent condition as well, both North and South of the border.

And talking of the border, until the Brexit negotiations come to a conclusion, the border is a seamless affair. You just ride straight through with no checks, and officials and business folks on both sides want to keep it that way.

What are the Irish tourism websites?

For Northern Ireland it’s https://discovernorthernireland.com/, for the Republic use www.discoverireland.ie.

For the Wild Atlantic Way, which includes all the tiny B-roads and winds its way for 1,553 miles up the west coast of Ireland from Kinsale to Malin Head, visit www.wildatlanticway.com.

For the best biking routes in Ireland, click here.

Remember your instructor’s advice to always go around a corner as if there was a tractor parked on the other side, because one day there could be? Make it your mantra on Ireland’s rural B-roads, because there will be. Or if not a tractor, a sheep or two farmers having a natter.