A guide to packing for an adventure 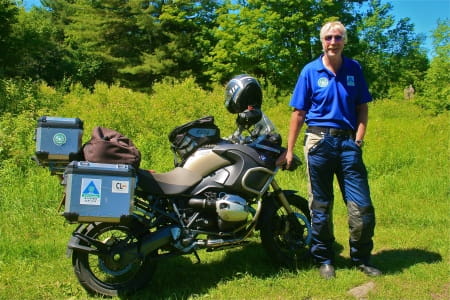 The Prussian explorer Ludwig Leichhardt set off into the Outback in 1848 with seven men, 50 bullocks, 270 goats, seven horses and tons of supplies. And presumably a towel in case he found a sun lounger.

None was ever seen or heard of again.

Robert O'Hara Burke and William John Wills tried to cross Australia in 1860 with 18 men, 20 camels and 20 tons of provisions, including a camel stretcher in case one of the beasts felt a touch unwell. Or took the hump.

Months later, they were found dead of hunger and thirst.

When Nick Sanders sets off to ride around the world, he takes a laptop, camera, tripod, toothbrush, passport, credit card and the clothes he’s wearing. And no hairbrush, obviously.

As always, there is a happy medium, and I’ve only found what it is by painful experience.

The night before my first jaunt, when Paddy Minne and I rode two Enfields from India back to Belfast in 1998, we spread everything we planned to bring out on the floor, then dumped half of it.

Paddy did cry a bit at leaving behind the collapsible entrenching tool, but even so, I had so many guidebooks, tools, spare parts and camping gear in the panniers that when I rode away from traffic lights, I could waggle the bars from side to side with no discernible effect whatsoever.

Still, at least it meant I was the only person ever to wheelie an Enfield.

For the next one, a month spent riding Route 66 on a Harley Road King, I went to the other extreme and just took hand baggage, but now I’ve finally got it about right.

Tank bag for documents and electronic kit. Soft waterproof bag bungeed on the back for overnight clothes and wash bag. Essential tools, spares and puncture repair and inflation kit in panniers if you have them.

That’s it. You can take the tank bag off for lunch stops, and both bags of in seconds at the end of the day.

Got a pillion? Stick your soft overnight bag in one pannier, theirs in the other, and helmets in the top box if you have one.

When you stop at the end of every day, wash what you’ve worn, hang it up to dry and put on the fresh set.

Next day, wear the still reasonably fresh set, unless you’ve been out clubbing in it all night.

For washing everything, including yourself, use a bottle of liquid soap from any outdoor supplier. And when mine exploded on the last round the world trip, I just used shampoo. Which meant I spent two months smelling of apples, but never mind.

And finally…to avoid losing stuff, always put everything away in the same place, and before you leave a hotel room or campsite in the morning, do a final sweep to make sure you haven’t forgotten anything.

I call it an idiot check, and you should usually find at least one. If you find more than you had the day before, your night out clubbing obviously went well.

Coming up next: essential reading, avoiding the red tape blues and handling dosh.