Two-wheel adventures, which bike to use? 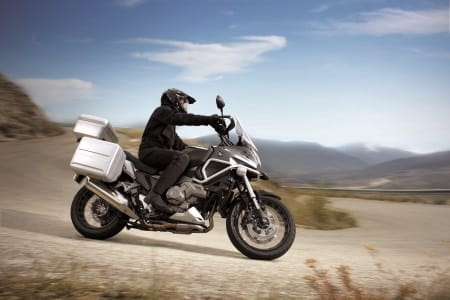 This year I recreated the journey of Carl Stearns Clancy, the first biker to ride around the world 100 years ago.

And his 937cc inline four Henderson had 7bhp, one gear, no front brakes and a bicycle seat for suspension.

Since then, round the world bikers have used everything from a Honda C90 to a Harley Electra Glide.

So the answer to which bike is simple: the one in your garage will do nicely.

Having ridden from India to the UK on a Royal Enfield, Chile to Alaska on a Triumph Tiger and around the world on a BMW R1200GS Adventure, my adventure shortlist would include:

And my surprise choice? Drum roll, please, Cyril… the Honda Crosstourer. Its latest generation DCT auto gearbox is so slick that on a recent 300-mile blast around Scotland in a day, I barely noticed even when it changed gear in mid-corner. When I try that, I get my elbow down, followed by the rest of me.

I’ve never been so effortlessly fast on a bike before, with only the Ducati Multistrada 1200 coming close.

And if you think that makes me a wuss, two years ago I rode a collection of bikes on Germany’s fabulous B500 mountain road with Maria Costello, until recently the fastest woman at the TT.

Her favourite was the VFR1200 in auto mode – and the Crosstourer is light years better.

So watch this space. It’s where the clutch used to be.

Next time: Packing. Less is more, the two of everything rule, and 101 things you can do with shampoo. Legal things, that is.