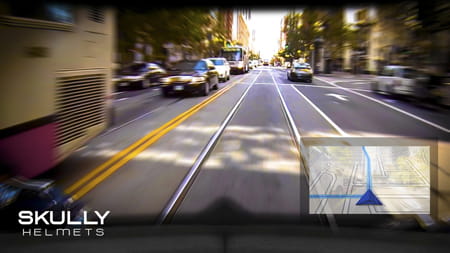 Skully Helmets was founded in Silicon Valley in 2013 by 29-year-old American Marcus Weller after a motorcycle accident in Barcelona, Spain. He failed to see the car that hit him as he was distracted while looking for road signs to complete his journey. Thankfully it was not life changing apart from the fact that it caused him to design a helmet to eliminate all distractions by using Head Up Displays (HUD) inside the helmet using a system similar to Google Glass and set up Skully helmets based in in Redwood City, California.

But, instead of just staying with a navigation system, he took it more than a stage further to come up with the Skully P1 helmet that has just been launched in the USA. The helmet which has DOT approval (the equivalent to BSI) has a 180-degree rear-facing camera and a micro-controller running a customised version of Android to deliver navigation and video information to the HUD.

Working by voice commands for safety and hands free operation, it combines smartphone-pairing, voice controls, weather information, turn-by-turn directions, and the aforementioned rear-view camera. The features are displayed in the corner of the visor and apparently the image appears to float about 20 feet in front of the rider.

The electronics for all of this technology are contained within the aerodynamically designed fin (to help reduce ambient noise) on top of the helmet. These include GPS, Bluetooth, an accelerometer, gyro, compass and a rechargeable battery. Currently Skully claim that battery life is nine hours, which should be more than enough for an average days riding for most people.

The P-1 is designed to work independently without a data connection working on Wi-Fi for updates and pairing-up with a smartphone for the likes of real-time traffic updates. According to the launch blurb, the helmet has been future proofed in that it will gradually accept apps as they are developed and other software as it becomes available. 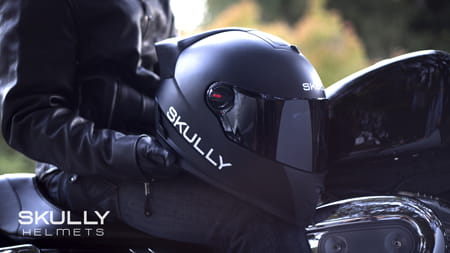 Apple users are also catered for, as while Skully worked with Android to create the operating system for the helmet, it can connect Apple iOS devices as well.

According to Skully, the plan is for the P-1 to be on sale around Spring-time 2014. Initially it will be offered in two colours - matt black or gloss white, and while no prices have been mentioned, it is likely to cost over $1,000 in the US, which is currently around £650 here.

No plans have been announced about export markets and under current legislation it would not be legal to sell it in the UK without BSI approval, or the European equivalent, although it would not be an offence to wear one purchased in the USA. However, there has been recent talk of the government banning Google Glass which works on the principle of HUD!