Polaris Slingshot: the trike that thinks it's a superbike 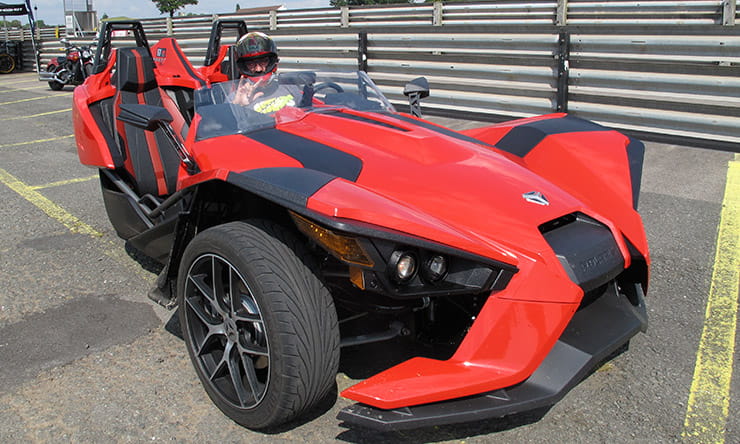 Is it a car, a plane or a motorcycle? Or a bright red three-wheeled Bat Mobile?

Well, it’s none actually. It’s the brainchild of the men behind the massive corporation that’s behind Indian and Victory Motorcycles – Polaris. Meet the new Polaris Slingshot – a £23,000 shot of three-wheeled adrenaline that can be driven on a motorcycle licence as it is classified as a tricycle.

Polaris are keen to sell this to thrill-seeking adrenaline junkies who like things with engines. Motorcyclists like us in fact. In the USA they’re already becoming a bit of a cult.

Making 173bhp and weighing in at 764kg dry, the Slingshot isn’t about to give a motorcycle a run in the power-to-weight sector, but in the power-to-fun stakes it’s right up there with a motorcycle. Yes it has three wheels, but the pureness, the acceleration, the wind in your visor, and the feeling you get of juggling that power on that massive 235-section rear tyre is every bit a similar feeling to man vs motorcycle.

We drove it on the road and at Mallory Park in Leicestershire, after an invitation from Polaris and must admit we were dubious at first. It’s not a motorcycle. But after a few laps at Mallory we totally get it and get why rich motorcyclists after a toy to park alongside their bike may get it too.

The engine is a General Motors 2384cc four-cylinder motor and the frame is a tubular steel chassis with a wide track front that’s as wide as a Lamborghini Aventador, and swingarm at the back with a belt-drive and a fat rear wheel.

Although it can be driven on a motorcycle licence, control wise it’s like a car with a clutch, brake and accelerator and a five speed manual gearbox.

But get behind the wheel and the Polaris shifts. You can drift it within the boundaries of the traction control and stability control system that always stops you spinning it, or turn it off and it’s up to your own skills to stop you facing in the other direction. The noise is every bit as intense and in your face as any motorcycle. But cruise around and it’s dead easy to drive slowly and pootle around catching admiring glances. If you’re short of friends, buy a Slingshot.

The interior is open cockpit, there’s a small windscreen to keep the wind off, but although UK law says you don’t need a helmet, we’d recommend it. And it looks bad ass.

And the bets thing is if it rains, the cockpit, including the radio, the seats, everything are fully waterproof, and you can jet wash the interior out when it gets grubby.

It may not be a bike, but it’s one of the nearest thrills you’ll get this side of a superbike, and I’ve never been in or on a vehicle that gets people running to take a picture, and shouting with bewilderment when you drive past bus queues.

Get a test drive if you can through Polaris' website. 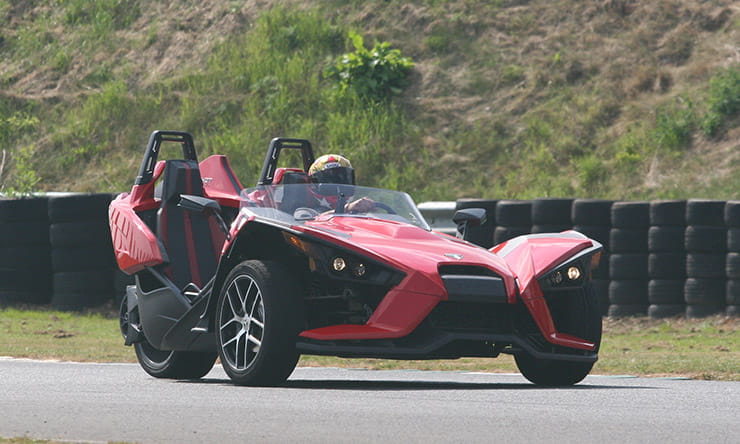