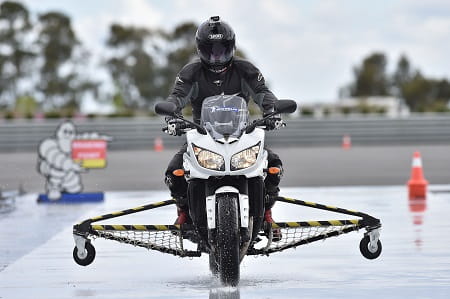 Since its introduction in 2011, Michelin’s Pilot Road 3 has been Europe’s best selling sports touring tyre, offering a good mix of performance and durability for pretty much every big bike on the market.

Now, three years on, the French firm has introduced an all-new version – the Pilot Road 4 – which it claims offers significantly better performance and even greater durability. To try them out, Michelin invited Bike Social to Seville, bringing along everything from Kawasaki’s peppy ER-6 to BMW’s bulky R1200RT.

To test the Pilot Road 4 in the real world, Michelin laid on over 20 different bikes to test on a 200km route, as well as a series of track-based workshops designed to show what the tyres were capable of in wet conditions.

For my first stint I headed out on a Triumph Speed Triple 1050. It’s a bike I know well, having covered several thousand miles on the OEM Metzeler Racetec Interacts, a tyre I’d always rated as very good, if a little on the sporty side for a roadster.

Being on unfamiliar roads, it would be unfair to directly compare the new Pilot Road 4s with the Racetecs. Overall, they did nothing but inspire confidence and gave lovely feedback. If anything, I’d say that the Michelins provide a plusher ride. As Michelin’s R&D boss Romain Bouchet says: “The rider does not want to be thinking about the tyres on the road” and to this end they have achieved their objective. As if to confirm this, I was able to enjoy riding the selection of great bikes and roads on offer, without having to concern myself about the rubber.

The Pilot Road 4 enters a crowded marketplace against, according to Michelin, the Bridgestone T30, Dunlop Roadsmart II, Metzeler Z8 Interact and Pirelli Angel GT. These sports touring tyres are hugely popular and while ultimate performance is less than the super sport focussed Pilot Power 3s, with which the basic carcass design is shared, the need to adapt to a wider range of bikes and conditions makes them every bit as advanced from a technological perspective. 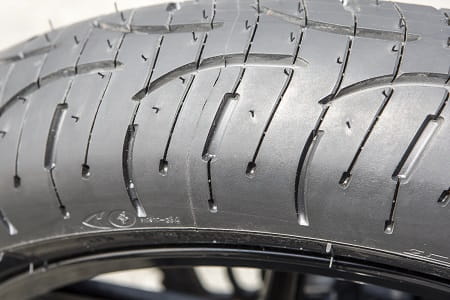 Designed to work with most modern bikes over 600cc, across a temperature range from 5°C to +45°C, Michelin has also introduced two additional variants, a GT version for heavy tourers like the BMW R1200RT and a trail version for adventure touring riders who want a pure road option.

Michelin claims that their new tyres have been some five years in the making, with a good chunk of that time spent not only developing the tyres themselves, but also the all-new machinery required to manufacture them. This is mainly due to what they call 2AT, or dual angle technology, which they are using on the GT version. This new manufacturing process alternates the way that the plies, or layers, of the tyre carcass are constructed, mixing bias plies (which offer better load carrying capacity) with radial plies (for better performance). The company claims that this leads to 15% more rigidity than with previous techniques, and increases comfort by offering more flexibility in the sidewall.

Confusingly, the Pilot Road 4 features ‘2CT’ technology, or dual compounds, with the middle 40% of the front and 20% of the rear featuring a harder wearing compound to minimise motorway wear, while delivering a softer compound on the shoulders. The trail (19” front) version features a wider centre section both front and rear.

Michelin claims that they carried out most of their development using the weakest chassis in the respective classes, with Kawasaki’s Z750 and Yamaha’s FJR1300 earning dubious mentions. The logic is that if they can find big improvements on those models that the step would be even better when fitted to, in Bouchet’s words, a Street Triple or R1200RT. Indeed, Michelin are particularly proud that BMW have adopted the Pilot Road 4 on the 2014 R1200RT, without resorting to developing a special original equipment version to BMW’s own specifications.

The advertising claims that you will ‘feel more secure, whatever the conditions*’ the asterisk no doubt being added by an overzealous lawyer to caveat that the performance in snow and ice can’t be guaranteed. Ah, lawyers, what would do without them?

In all seriousness, the French manufacturer took every available opportunity to ram home the Pilot Road 4’s wet weather capability, and even laid on some simulated tests to prove the point. Riding Yamaha FZ1s at 30mph down a flooded epoxy surface to replicate painted lines, I was consistently able to stop the bike fitted with the new Michelins in 27 metres, a full 10 metres less than an otherwise identical bike fitted with correctly maintained Z8s. In a more subjective test, Michelin sent us out around a wet track on a Pilot 4 equipped Kawasaki ER-6n and, although I didn’t have the benefit of a direct comparison, the front tyre inspired total confidence as I braked while steering to avoid a variety of obstacles. 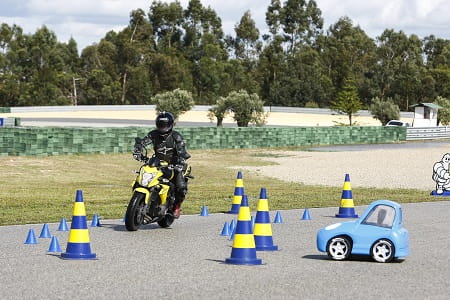 Part of the Pilot Road 4’s wet weather capability comes from the distinctive ‘sipes’ or light grooves which run across the tyres. These grooves, which are a patented design, were seen on the previous Pilot Road 3s and slice through the surface water making it, according to the manufacturer, 17% better than its nearest competitor when it comes to wet weather braking.

Across the day we rode a wide variety of bikes fitted with the new Michelins, from the hooliganistic KTM Duke 690 to Triumph’s 300kg plus Trophy SE. After a day’s riding, it was hard not to be impressed with the French manufacturer’s latest product but, of course, the true test of a tyre comes from using them day-in, day-out over a prolonged period.

Michelin claim that their tyre has been tested over 2,000,000 kilometres and should deliver around 20% more longevity than the outgoing Pilot Road 3s. With prices remaining competitive against the other major brands, there’s no reason why Michelin won’t retain its status as Europe’s best selling sports touring tyres with the Pilot Road 4.
or !