Inside Yoshimura | How motorcycle exhausts are made 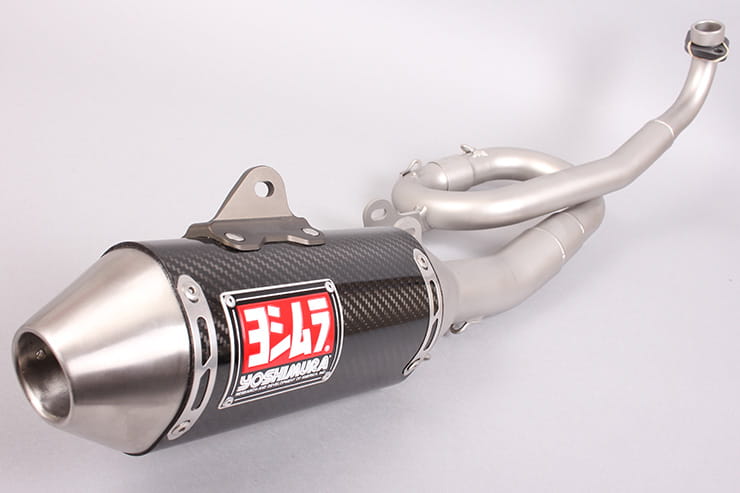 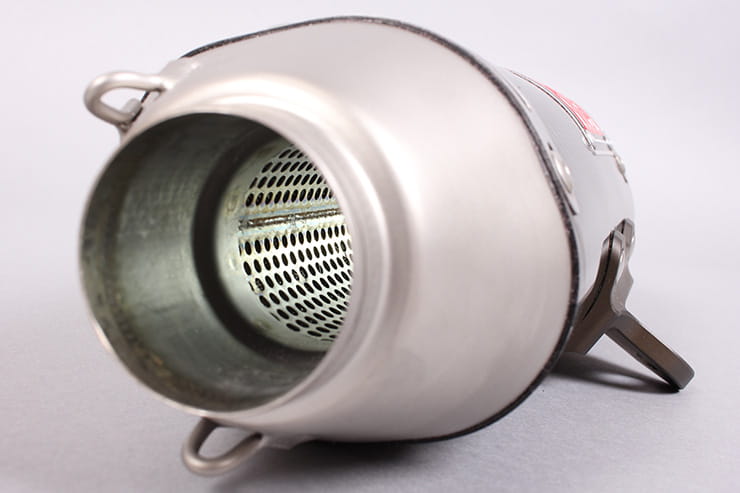 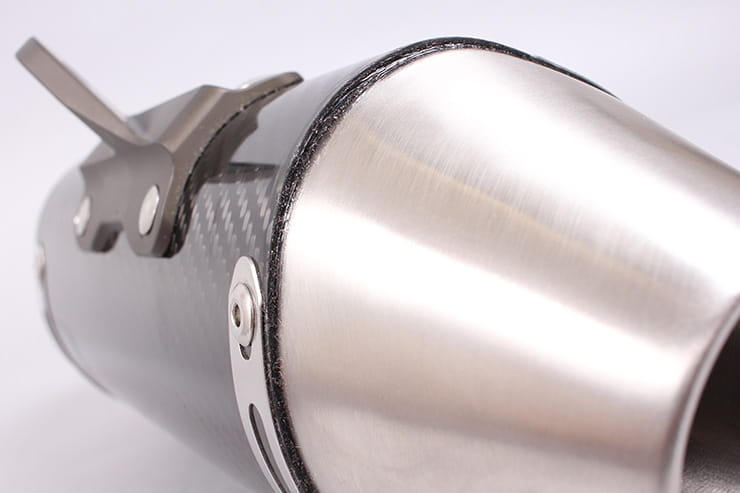 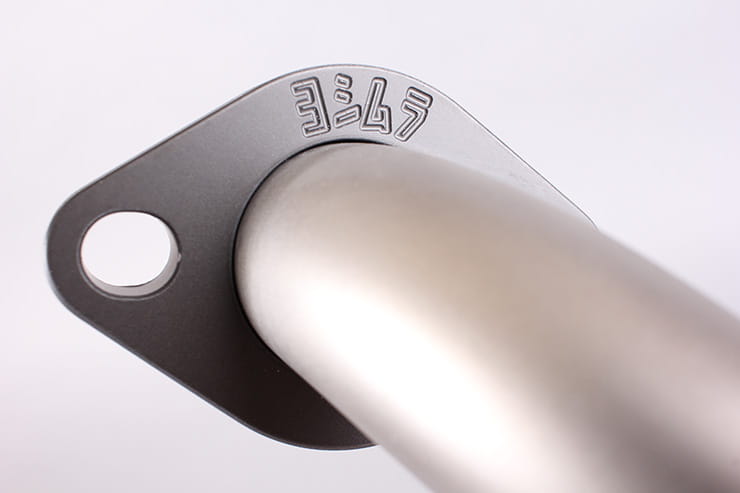 We’ve tested this RS2 exhaust on the dyno. Click here to see the review

The Yoshi is sold as offering increased performance without any tuning modifications, and during testing on the dyno at Chris Walker Kawasaki, we found that to be true. You can read the full review here. Of course, most bikes – the MSX (or Grom in the US) included, can get further increases in performance through race tuning – having an experienced dyno operator adjust the fuelling; either with a DynoJet Power Commander, by reflashing the bike’s ECU, or with the fitment of the new Rapid Bike automated engine tuning system, available from Performance Parts.

We wanted to know how an exhaust manufacturer goes about developing a system for a bike – while maintaining the tricky balance of outright performance against engine efficiency and reliability – so spoke to Tim Welch, Sales Manager of Yoshimura R&D America, in California… 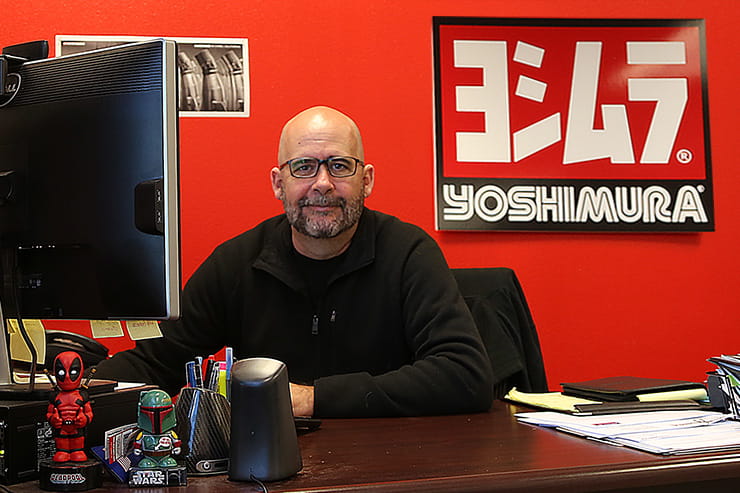 During testing of a Yoshimura RS2 exhaust, I found the Honda MSX125 was able to richen its mixture up a little when the new system was fitted. To what extent can an ECU deal with variations in back pressure?

“For years, manufactures have been using things like barometric pressure bulbs and oxygen sensors to compensate for differing environmental conditions. The range of effectiveness is limited to an ECU’s ability to make corrections without bumping the engine calibration out of an emissions compliant configuration, but this type of technology is necessary for manufacturers to provide a singularly tuned ECU to its entire customer base, regardless of where in the world they live.

“When we took things a step further and race tuned the MSX/Grom, we faced some challenges in that the Grom’s electronics were especially reactive and required an O2 sensor eliminator to defeat the auto-correction feature in its electronics. We would actually get a really good tune set in the bike, then without warning or reason the tune would go really bad. It was never clear to us if the changes were due to a dynamic tuning feature that simply adjusts existing settings, or defers the ECU to alternative fuelling maps that are designed for a range of different environments. Judging by the dramatic effect the change made to the rideability, the ECU was shifting to a completely new map. In any case, once the sensor eliminator was installed, the tune stabilized and we were able to go racing with confidence.”

“For sure, though more so the challenge is in improving performance over the stock unit. Manufactures are building better bikes with better technology every year. A superbike from 2017 has improved significantly over its predecessors from 2007, and that includes its stock exhaust. Thankfully we continue to learn new tricks every year that allow us to keep beating the stock bike, and hopefully the other competitors in our market.” 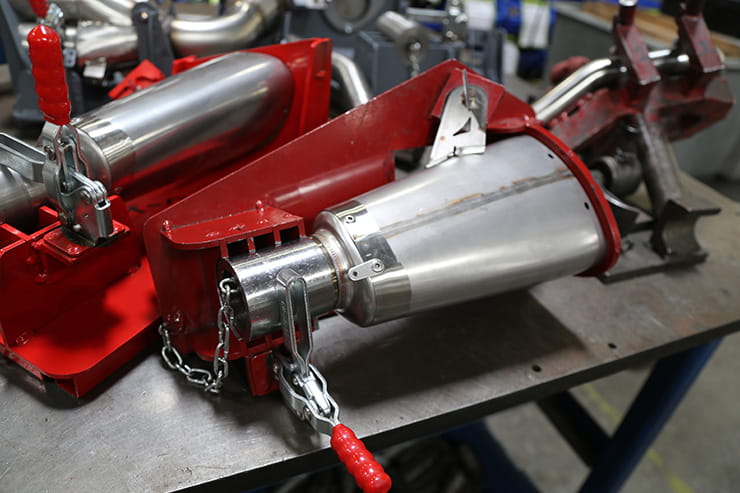 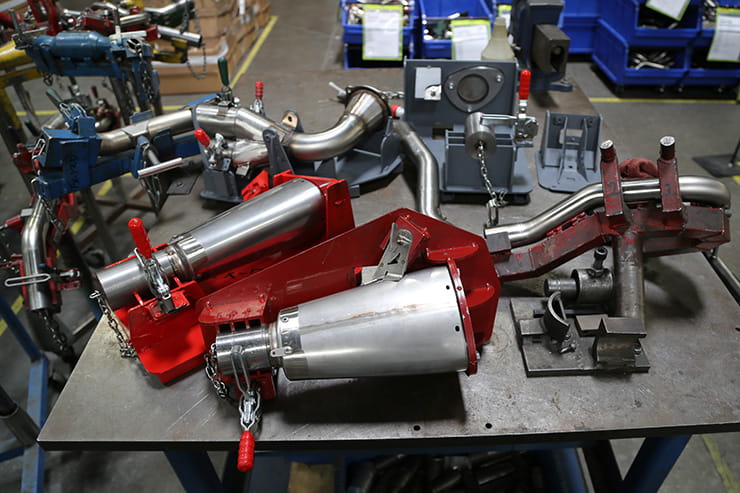 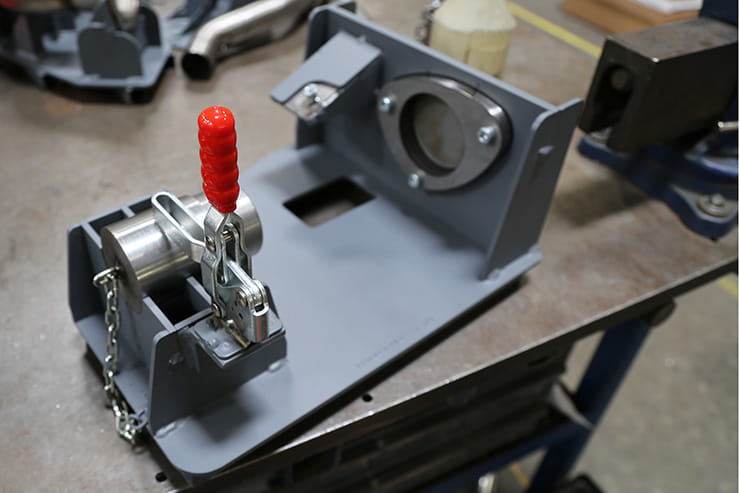 The team at Yoshimura makes its own jigs for the assembly of the exhausts.

“Finding a balance between performance, sound, design, and price. We can make anything, and do so for our racing partners every day; the challenge is in combining what we can do and what we should do in order to provide the marketplace with the product it wants and the quality it expects from Yoshimura.”

What makes one straight-through end-can different to any other?

Do end-cans make much difference now that we have catalytic converters before them?

“Our general standard is to never release an exhaust system if it doesn’t at least meet or beat stock power, or otherwise enhance the bike’s performance. More restrictions caused by a bike’s muffler that are a result of increasingly restrictive global noise regulations are responsible for much of the lost performance potential in a stock exhaust system.

“Less restrictive, more efficient new catalytic convertor technologies allow for a lot more performance than ever. Sometimes we have to work really hard to achieve improvements from a slip-on muffler design, other times we are able to make surprising gains...” 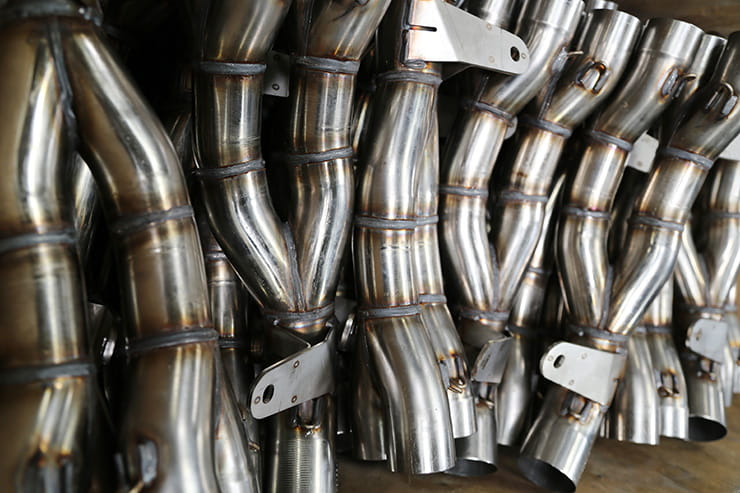 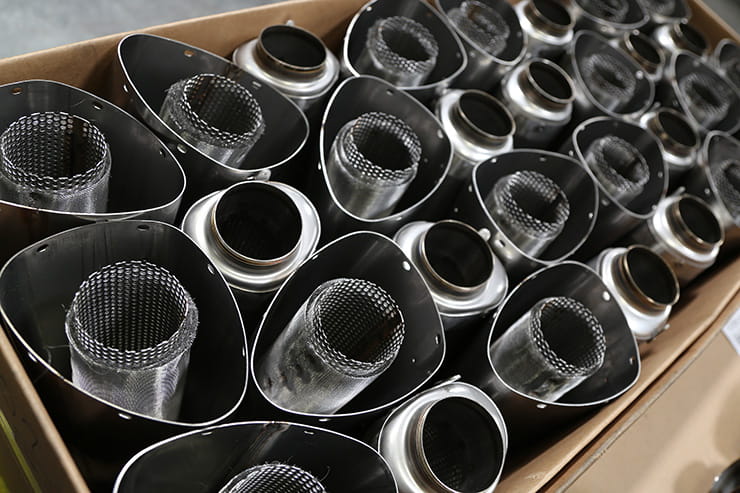 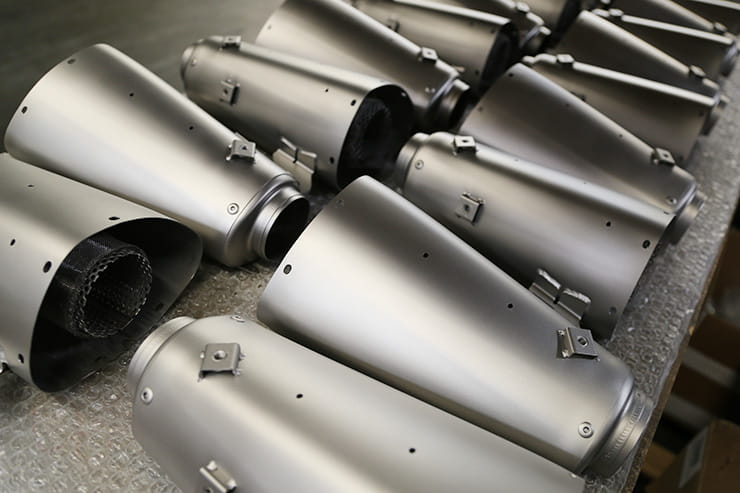 Every part is hand made in the Californian factory

Are you increasingly developing systems that require no fuelling changes?

“Absolutely. With the increasing pressures from government regulations, and the challenges tuners face in making performance gains, it’s very important to us that our products stand on their own, and don’t require outside aids to yield power. We never want a customer to ask themselves ‘did the pipe make the power or was it the tuner?’ Then to question, ‘did I waste my money on a pipe?’

“We still acknowledge that there is likely to be more power gained with race tuning, but we let our customers know that our products are generally ‘Plug-n-Play’ – everything you need to get the power we advertise comes in the box with the pipe.”

How do you measure back pressure when developing a set of headers?

“Back pressure measurement is not a factor we regularly consider in a conventional sense. Our goal is to manage and maximize power, sound and weight savings, so I guess you could say that changes in back pressure are a product of what we do, and are not a factor we measure. Accordingly, we do consider and manage back pressure and its effects on performance in our choices of dimension and design.”

How do you know what the optimum pipe shape is? 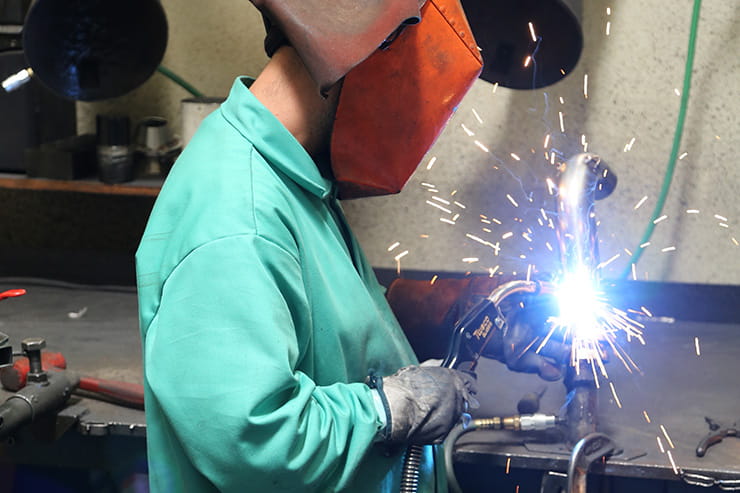 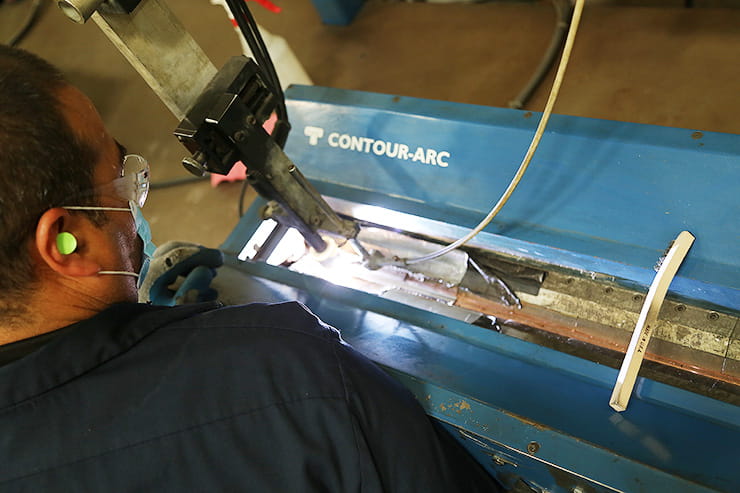 Various welding techniques are used in the construction of the exhausts

Where do you start when designing an exhaust?

“At the beginning… we measure the stock exhaust performance and dimension to determine a baseline. You can’t consistently achieve improvements if you don’t know what you’re trying to beat.”

What is the production process?

“We build everything in-house including our tooling. Generally, we receive raw materials from suppliers – like tubing, sheet metal, billet alloys, and rolls of carbon fibre – then build anything we need from there. Once our R&D department has completed a design, we build products as needed to fill our inventory and supply our customers.”

To what extent can you tune the sound of a system?

“So much of the sound is determined by the engine’s valve timing, firing order and port structure that it’s hard to say we can ‘tune’ the sound; we can’t make a GSXR sound like a Ducati for instance, but we can make both of them sound great.

“The definition of noise is ‘a sound, especially one that is loud or unpleasant or that causes disturbance.’ I think it’s better to say that we enhance a bike’s sound by managing dimensions in the exhaust system to eliminate as much noise as possible.” 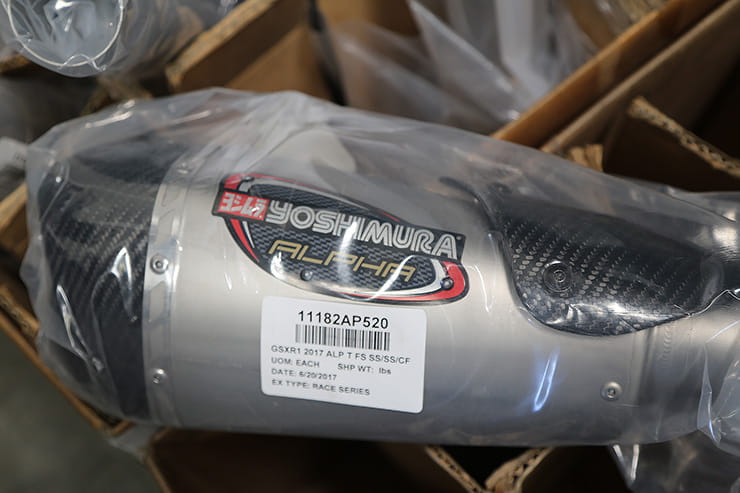 A completed Yoshimura Alpha-T for a 2017 Suzuki GSX-R1000, ready for dispatch

Do you think people buy an exhaust more for the sound or performance?

“I think it depends on the person… I’ve had racers reject a pipe that makes more power and gives faster lap times because it was too quiet or had a ‘weird sound’ to it. I’ve seen racers run faster laps because they like the sound of the pipe and it makes them feel more confident.

“I believe people buy pipes – or almost anything – with all of their senses and it’s the different ratio of sensory stimulation for everyone that motivates them to pull out their wallet and buy something.”

Do you think future laws might restrict the use of aftermarket accessories, particularly those that increase performance and noise?

“Laws are put in place to keep us safe, and while it’s very likely that future regulations will be stricter, I believe they’ll be relative to the contemporary technology of the time.

“In reality we are riding bikes that are faster than ever and built within the confines of regulations that are stricter than ever. We will never see regulations that limit improvement. Racing promotes improvement and seeds the technologies that make stricter regulations achievable. You can’t have one without the other. It’s the natural order of things; The rule makers will keep building taller walls to keep us safe and racers will keep finding new ways to climb over them faster than their competitors.”

To see how much difference a Yoshimura USA RS2 exhaust made to our Honda MSX125 (or Grom), and to hear it compared with the original system, click here. 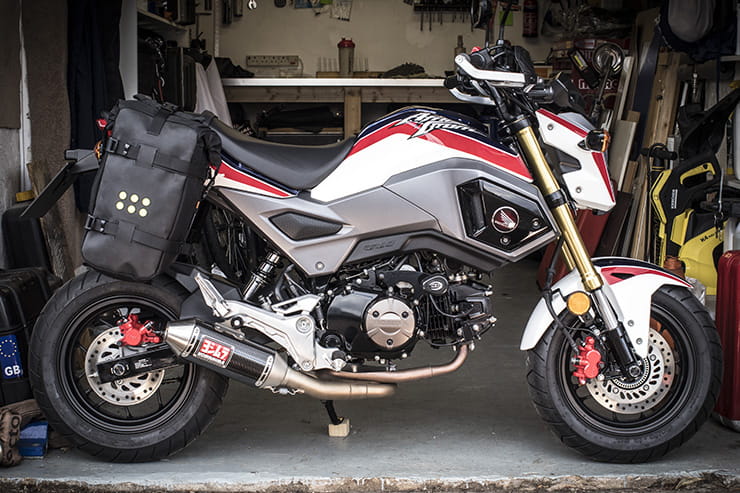