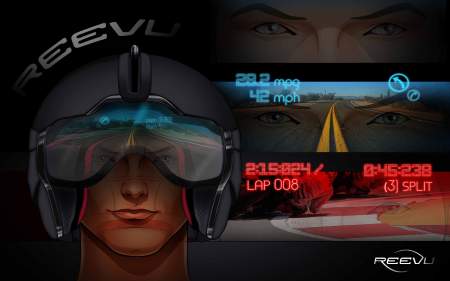 British company, Reevu, established itself in 1999 and by 2010 had released its first rear-view helmet but the product was deemed too heavy. So after a return to the drawing board the RV MSX1 was bought to market with a fully adjustable optical device allowing the wearer to see behind them using peripheral vision and the ‘the unique positioning of the optical device’. 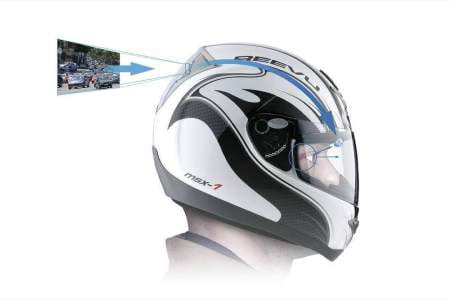 Reevu are now developing a helmet equipped with Heads-Up Display with a target of 2015.  The company are claiming that riders are being asked to re-focus for too long by having too much information and buttons via the dashboard and handlebars which is distracting and encourage the rider to look away from the road or track for longer and at more regular intervals.

They say, “Reevu Intelligent helmet is all about delivering pieces of information to the rider from the EMS (Engine Management System). We are currently in talks with two of the World’s leaders in this field and their engineers have been astounded as to what can be achieved with the Reevu helmet design. The trick is to deliver the information only in the peripheral vision of the rider so that there is no distraction from the track or road. It’s the same as the Gear shift LED array positioned on the Formula one car model’s so that the driver can see the image without refocusing or looking directly at it”.

Rival technology is also being developed by Californian-based Skully helmets and the Russian 'Live Maps' company.

Meanwhile, the company have seen sales of the original MSX1 up 40% over the last financial year with Russia, USA and South America as the main culprits for “cleaning us out of stock” according to the company spokesman.  It’s the “more established markets who show the most resistance”, he continued.  Distribution will begin in the UK in 2014 but only via 5-6 retail outlets with the Japanese market also being targeted.

The basic lid has a RRP of £249, which is increased to £299 for the carbon-trim version and a whopping £1900 for a full carbon helmet with personalised measurements.