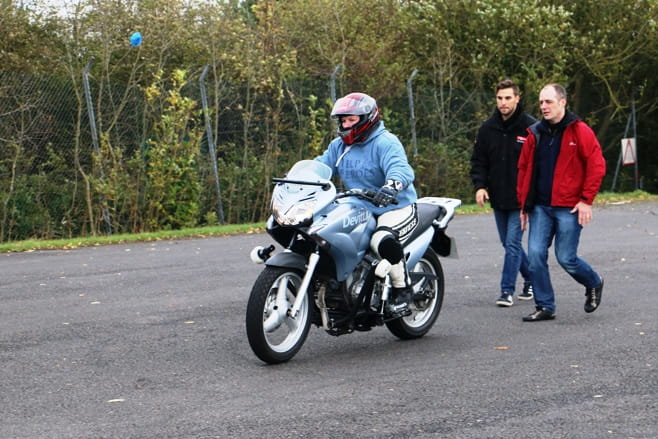 On the outskirts of the Donington Park circuit tucked away behind the run down from Redgate to the Craner Curves is a 42,000m2 expanse known as the Tarmac Lake. It was the scene where, last autumn, a dozen volunteers and I witnessed as near to a ‘motorcycling miracle’ as we’re ever going to.

Volunteering work is expected to be fulfilling; it’s an opportunity to broaden your horizons, to make a difference to the environment or those who you’re helping. You’re meant to come away with a warm and fuzzy feeling inside safe in the knowledge that your contribution has been worthwhile. So, while I won’t belittle tree-planting, litter-collecting or delivering food to the older generation, spending the day with The Bike Experience (TBEX) is, I promise, truly inspirational stuff.

Set up in 2011, the charity was set up by Talan Skeels-Piggins and aims to teach and advise motorcyclists who have been disabled how they can ride again, through the provision of adapted and modified motorcycles in a safe environment.

Eight years earlier, Talan was the victim of a horrific road traffic accident when he was knocked off his motorcycle and into the path of oncoming vehicles. He can recall the moment when the car driver asked him “Are you alright, mate?”. You’ll have to ask him what the response was!

It can change people’s lives just by using a motorcycle

The accident shattered his spine and broke his neck leaving him paralysed from the chest down and with no control over the core muscles which keep him upright. He said: “When I was in hospital I never thought I’d ride again.” If you spend any more than 30 seconds in this guy’s company you will realise he is no quitter.

“A lot of people who have similar injuries think when you’re injured-disabled, a lot of your life opportunities are taken away from you. We give them back the choice and show them they can overcome challenges. It can change people’s lives just by using a motorcycle.”

Not only does Talan now ride but he races too. 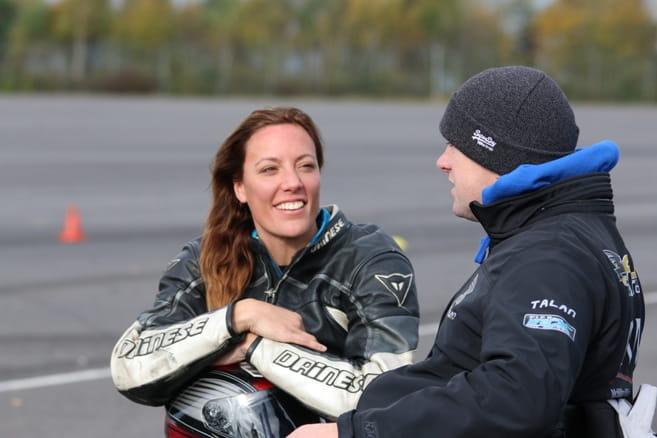 One of TBEX’s safe environments is Donington Park’s Tarmac Lake where, today, among those Talan and his team are looking after is a Paralympic skiing colleague and motorcycling virgin, Jane Sowerby. Also signed up is Nerys Pearce, who was hit by a driver reversing into her bike six years ago. Her mental scars are deep and simply sitting on a bike again was an emotional moment for Nerys. It quickly brings home what one slip of a drivers’ concentration can result in but it also makes us volunteers more determined that Nerys and Jane’s experience is the very best it can be.

The small ‘fleet’ of machinery on offer from The Bike Experience have controls which are interchangeable. In some cases where the rider doesn’t have the use of their right arm, for example, the controls of the bikes are switched around. Same as the gearshift for those with limited leg use.

Both Jane and Nerys are paralysed; Jane from the waist down and Nerys, like Talan, from mid-chest. So, to start with both Jane and Nerys use a modified Honda XL125V Varadero which has its gear shift mechanism operational by a thumb button on the left side of the handlebars. The bike also has Velcro straps for the riders’ boots as well as bolt-on landing legs. These have a similar purpose to stabilisers and, at their lowest setting, will only allow the bike to lean by a few degrees before they touch the ground therefore preventing the bike from falling.

Now, I have no concept of what sitting on a motorcycle with no core muscles to keep you upright feels like. It becomes apparent just how difficult this is when witnessing both Nerys and Talan having to put both hands on the handlebars to keep themselves upright. It’s also why they fasten their helmets and gloves before getting on the bike. 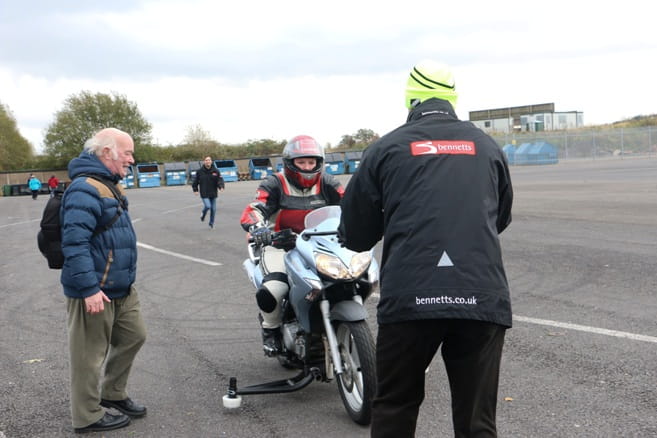 Each rider has their own team of launchers and catchers all of whom are volunteers who have been briefed on their role. Once the rider has been assisted onto the bike, one volunteer supports the bike at the front and one at the back. The rider builds the revs and releases the clutch as the volunteers let go and begin jogging alongside offering support. Nerys and Jane summon every mite of strength and head towards the assembled catching volunteers 300 yards away. We’re desperate for them to succeed. 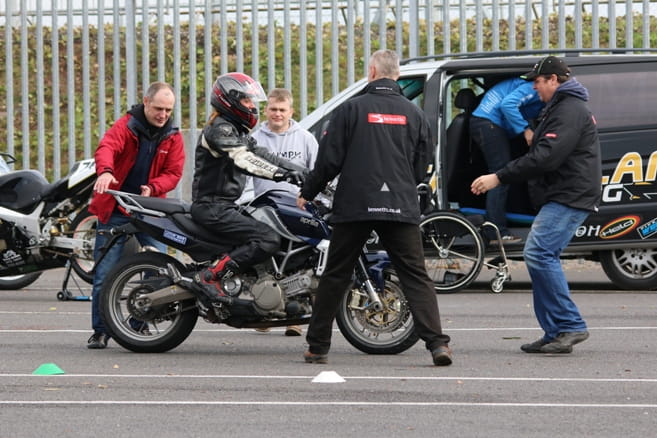 As confidence builds, the landing legs are raised and steering input is introduced. In less than two hours both of our injured-disabled riders are circulating the ½ mile coned track. Nerys and Jane were even upgraded to the automatic Aprilia Mana. It’s a remarkable and humbling site. These are some of the most inspirational characters, all of whom didn’t think they’d ever ride a bike again after their respective accidents or illnesses. Yet there we were on a breezy autumn day at Donington Park and it might not have been a miracle but I guarantee it’ll be a day etched in the memories of everyone who attended.

What happens next? Well, TBEX is a charity so relies on donations of time from volunteers to leathers, boots, gloves and helmets. Talan and the team have ambitions of upgrading their fleet of adaptive bikes and, further down the line, developing a gyroscope system to replace the stabiliser legs. 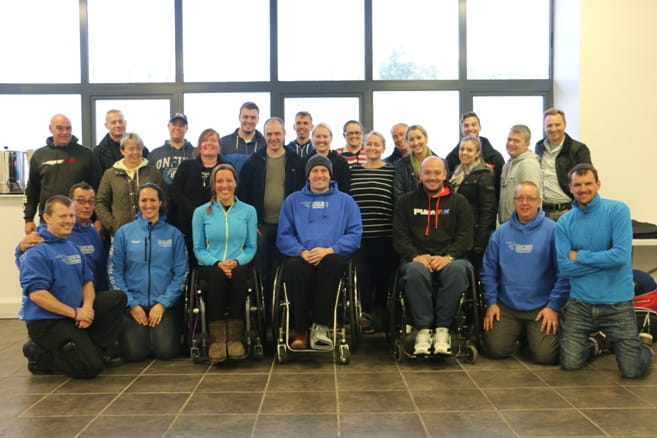 Talan has his racing plans for 2015 settled. He’ll be competing on his Suzuki GSCR600 K1 with The British Motorcycle Racing Club (BEMSEE) and Thundersport.

With thanks to Speechless Films for providing the footage.