Riding with Rossi at his ranch 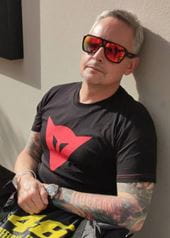 By Tim Aucott
Tim has built and ridden all types of motorcycles for last 30 years. Has raced enduro and, over the last few years, raced flat track. His obsession doesn't end there as he's currently getting in to track bikes too. 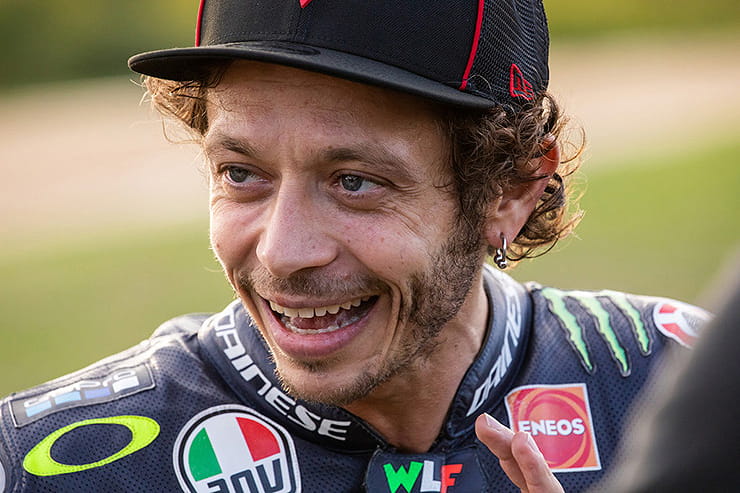 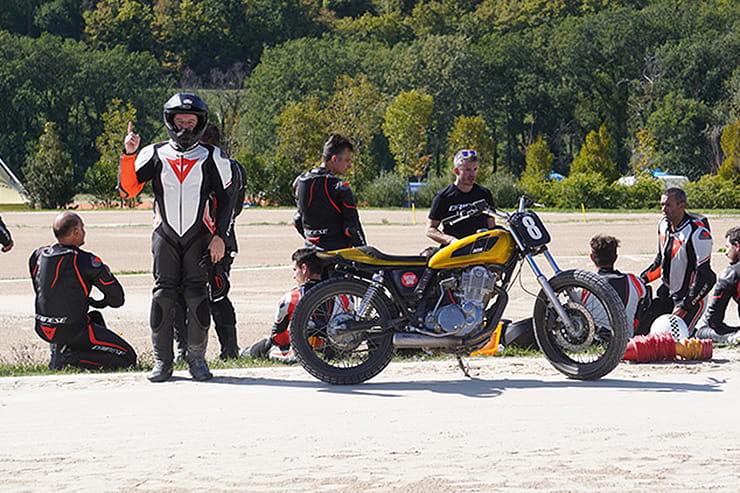 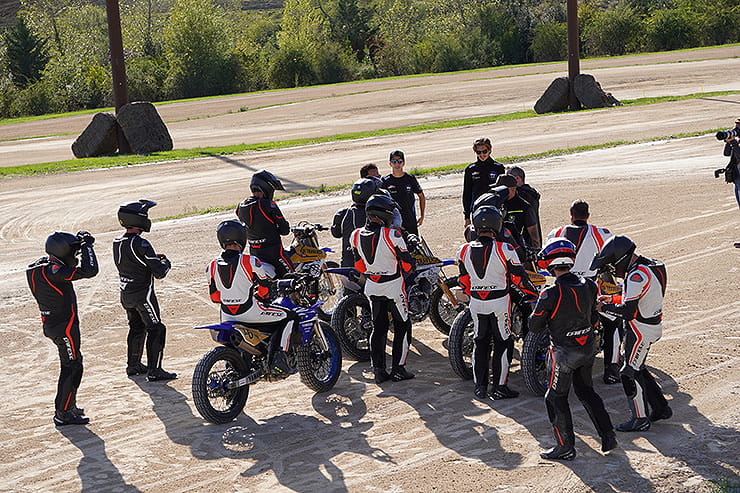 People are always telling me how lucky I am to have a wife (Lucia) sharing the same passion for motorcycling as I do. Most of the time I just see twice as many tyre changes, servicing, mending, etc. But this time it payed off, big time!

When Lucia came running into the workshop, waving her phone, all excited asking me if I have seen Sideburn’s latest social media post? As I’m a self-confessed closet luddite, I try and keep away from social media. So, no I hadn’t.

Well, apparently, Dainese were running a competition to win a place at the Valentino Rossi Flat Track Experience for 12 lucky riders to go out and ride at the famous ‘Ranch’ - Valentino’s training facility in Italy. And meet the GOAT, himself.

Having ridden and raced flat track for the last few years, ‘The Ranch’ is one of the places I have always wanted to go to. I mean really wanted to go to. Being a Rossi fan too, to go and to ride plus meet him would be incredible.

So, Lucia did her internet thing and entered us both for the draw. Each rider could to take one spectator so she entered us both as riders just to hedge her bets. With the amount of people who were destined to enter, I didn’t hold much hope.

A few days later, Lucia came into the work shop again excited saying Dainese had accepted one of us to ride. But they didn’t say which one! So, after nervously email exchange, Dainese confirmed it was me. It pays to have wife sharing the same passion for motorcycles. She wasn’t happy but after a mad few days getting a COVID-19 test, sorting flights and car hire we were set to go. Not easy during the pandemic but frankly speaking, if there’d been no flights available, I would have driven there! 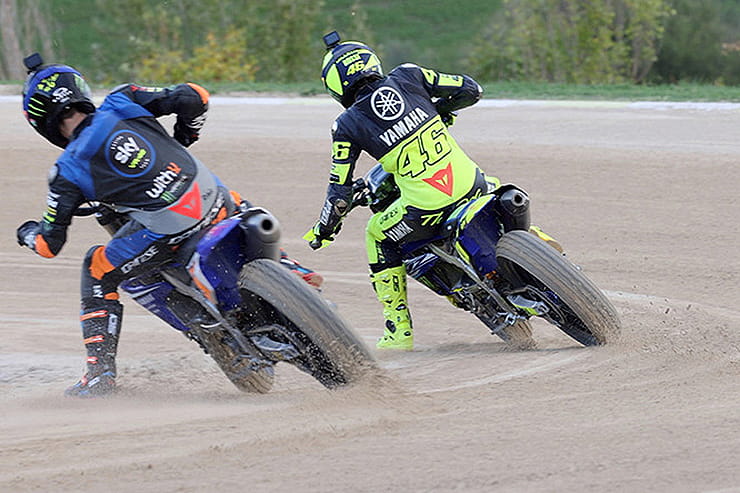 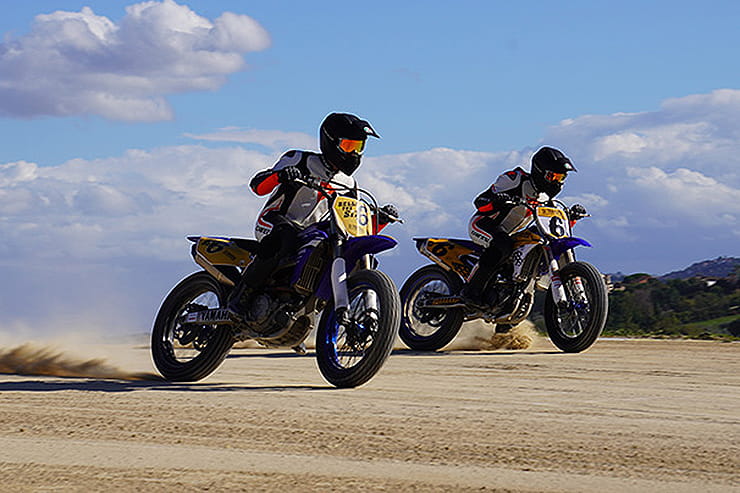 VR46 on board commentary (in Italian) around his flat track circuit

Above: Recorded at the same time as our trip, and exclusively for Dainese, Valentino commentates on-board while riding around this incredibly tricky and slippery circuit, he makes it look easy by gracefully wading around the world's most exclusive circuit. It's just a pity not all of us speak Italian!

Driving down the east coast of Italy from Bologna to Catollica you can see why Italy has overtaken Spain in motorcycle racing popularity. Passing by Imola, then countless kart track being used by minimotos, then to Misano. And all that has probably something to do with Rossi having his headquarters and training facilities nearby.

We met all the lucky riders and their spectating buddies on Friday evening at our hotel. Fast forward to 9am Saturday morning and we were all on a coach and our way. Excited was an understatement. Our first stop was to the Marco Simoncelli museum which was very moving to seeing his racing life from his first bike to his last, and everything in between. I’d recommend going if you get the chance, it’s well worth a visit.

It still doesn’t feel real. Pulling up right outside VR46 HQ and being able to go inside. A guided tour around VR46? Not in my wildest dreams.

We were wandering around Rossi’s office, his desk, one of his bikes just sitting there, it was crazy. We were taken right through the development and merchandise part of the building (and asked, no told, not to take photos) and ended up in the workshop with lines of bikes from Moto2 machines to minibikes sitting there. Mind blowing!

Back on the coach, we headed to Tavullia for lunch. If you don’t know, Tavullia is Rossi’s home town, where his fan club and restaurant are based. After lunch, we had a quick visit to the VR46 fan club to pick up signed merchandise. 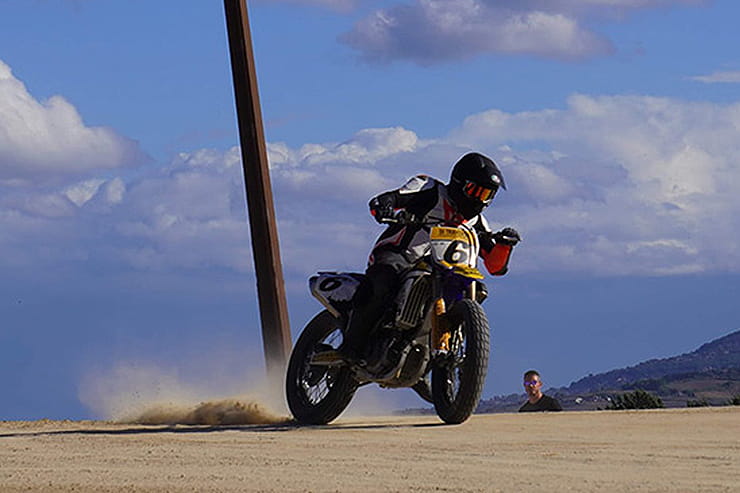 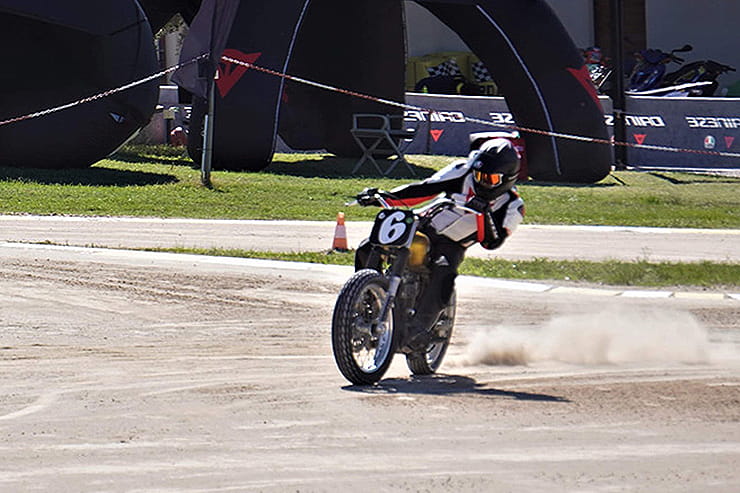 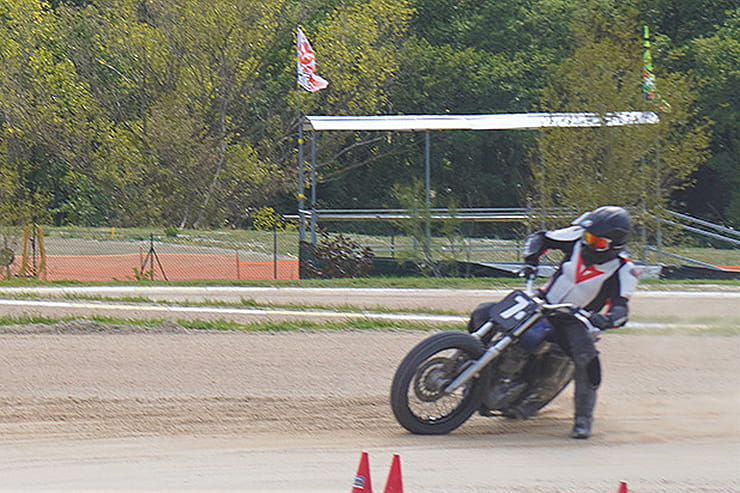 Above: Tim gets used to the different machines

So, it was now time to go to The Ranch. Sitting in blacked-out vans travelling down the dusty road, through two security gates and passing plenty of expectant Rossi fans to get to the track was very strange. It really was like visiting royalty. I really can’t describe how surreal it felt to be there, yet so relaxed.

During our first flat track, the briefing was held in an outside building, Rossi pulled up outside in a Fiat 500 and shouted something in Italian to everyone. That sort of set the scene for the remainder of the weekend.

The rest of the evening was spent watching Rossi, Franco Morbidelli, Luca Marini (both graduates of the VR46 academy and now plying their trade very competitively in the Grand Prix world) and the rest of the teacher-riders demonstrating how to ride flat track. The skills and fitness level these guys have are on another planet. 20 laps sessions on a 2.3km dirt track and they didn’t even break sweat.

After one of the sessions Rossi came over to say hello and to tell us how to ride his track. Now I’m only used to turning left with a steel shoe and no front brake on a flat track bike, but as Rossi said “this is little different”. Valentino wanted to develop a track that has the felling of an American track - little grip but more technical.

“Little grip, that’s the secret to this training track,” he told us.

Rossi went on to tell us that going fast is all about finding grip, saying “if the rear wheel is spinning you aren’t going forwards”. Throttle control and body position work together to find grip. Going into the corners is different, breaking traction and getting the bike to slide into the corner. Then sitting it up and powering out, steering it on the throttle. Rossi made it sound so easy… might have been his Italian accent. He made it look even easier, IT WASN’T! 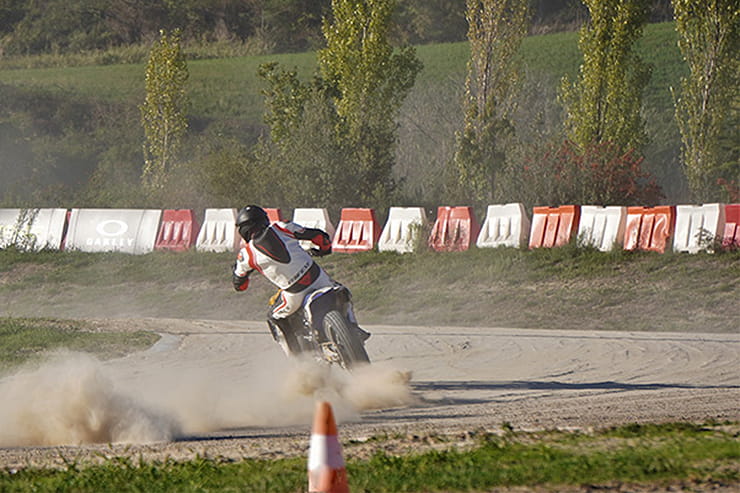 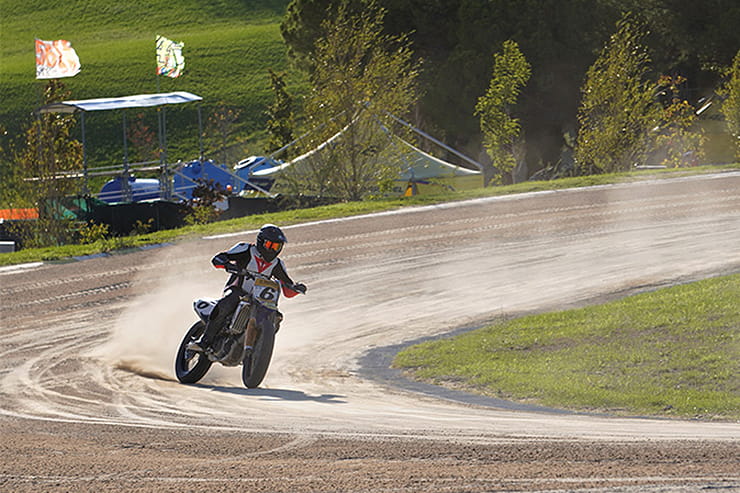 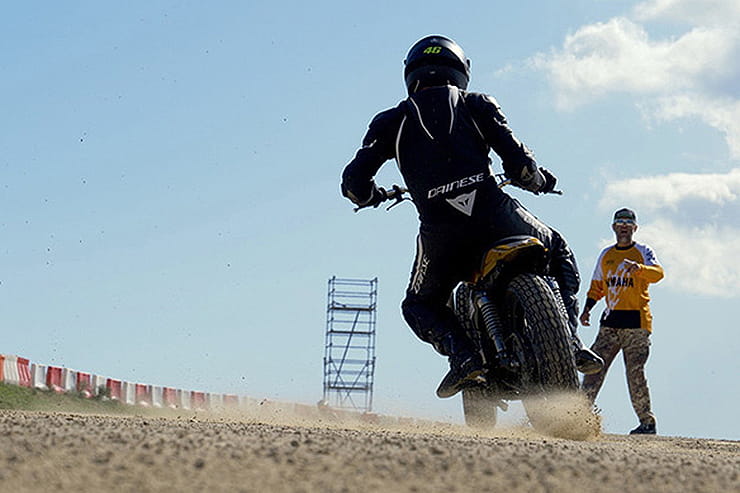 Finally, we got to ride

Dainese suppled all the riding gear too; leathers, boots, gloves, goggles, helmet and even underwear to use. We even got to keep the AGV carbon helmet and underwear, lovely.

After our final briefing, we headed out on the track. Now was the time to be excited. Our instructor was Marco Belli, a flat track champion, so what he doesn’t know about riding flat track and track prep isn’t worth knowing. He runs his own school in Italy too.

The bike to start with was the Yamaha SR400 - a wise choice to get to grips with the lack of grip on the track. We went through various drills to get familiar with the bikes then gradually built it up to go around the oval in the centre of the main track.

So much fun, Marco shouting out instructions in his emotional Italian accent. The sun was out, the dust was being thrown up and I was riding around Rossi’s track. Pinch me…

Lunch time came and we were treated to a fantastic meal cooked by Rossi’s personal chef. We all sat upstairs in the dining room and watched a personal video from the man himself. Valentino that is, not his chef. Writing this now still doesn’t make it feel real.

Back on track after a typically lazy Italian lunch and this time we were on the Yamaha YZF450’s that are basically converted MX bikes. Lots of power on the track with little grip but that’s what it is all about.

It was a real eye opener for me. Not being able to use a steel shoe for support and backing the bike in on right hand corners.

I understand now how training here translate to riding on a circuit. Watching Rossi and the other riders on the TV, I can see them backing the GP bikes into the corner, squaring it off and accelerating out. Coming through the VR46 academy here almost gives you an unfair advantage on the circuit.

At the end of the day we got to ride the full track. Being set on the side of the hill, there's a lot of elevation changes, left and right turns, and hairpin bends. The track had everything and was quite technical in places, fast in others and slippery in most. The track is so long (compared to the others in the flat track world) and it took a while to learn it. Of course, just as it was all coming together it was time to finish. Probably for the best. It’s such technical track to ride I was totally worn out.

Just want to say thank you to Dainese for making my dream come true. 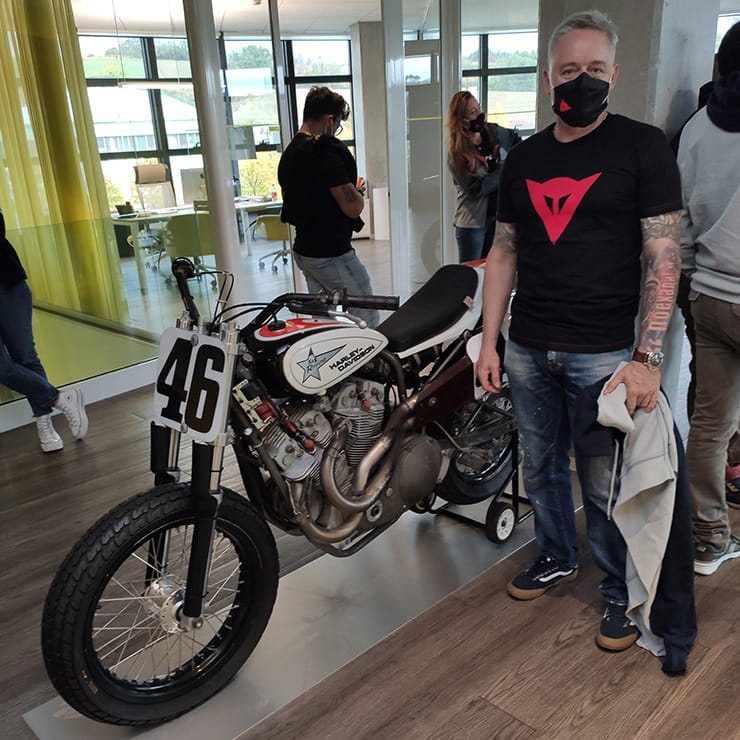 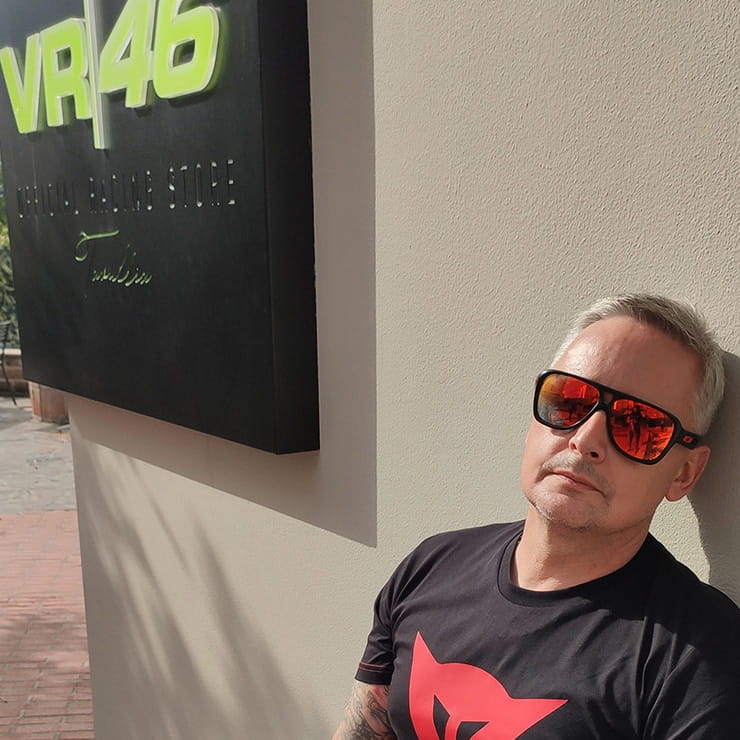