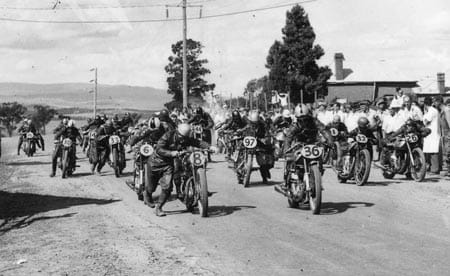 Following the horrendous 70 million casualties of the Second World War everyone with a passion for motorcycle racing was longing for the first flag to drop after peace was declared in May 1945. The first World Championship was run in 1949 – before the war there had been races such as the TT but there was no official championship.

Even 64 years ago, there were attempts to limit speed and costs. In 1939, AJS factory rider Walter Rusk had already won the 1939 Ulster Grand Prix at over 100mph and, as a result, post-war supercharged machines were banned.

This put British manufacturers in a strong position because Norton and Velocette both had successful, unsupercharged, machines which were readily available from before hostilities began in 1939.

So the two major classes – the 350cc and 500cc – were both won by British riders on British bikes. Freddie Frith took the 350cc class on his KTT Velocette and Les Graham the 500cc on board the AJS “Porcupine”.

It’s easy to mis-understand these early GP bikes which look Stone Age crude compared to a MotoGP machine. This would be a mistake because they have to be seen in context. 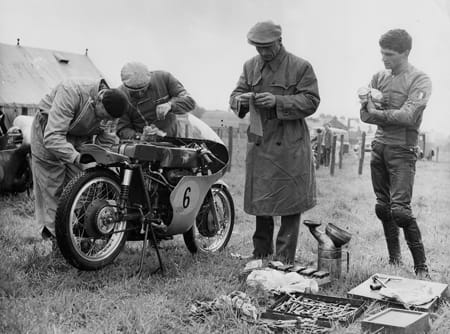 Most importantly, the vast majority of the early GPs were held on public roads. These were rough, badly surfaced, incredibly dangerous and had many high speed corners. More than anything else, a rider needed a bike which was ultra-stable with rock solid handling. The ability to turn quickly was irrelevant.

With the fine handling which epitomised British bikes came surprising performance from the single cylinder engines. An AJS 7R might only have produced 32hp but, given enough space, its heavy flywheels enabled it to run up to 120mph – and hold that speed for a long time.

On long, rough, sweeping bends the British singles were supreme.

No-where was this epitomised better than Geoff Duke’s two 500cc World Championships in 1951 and 1952 riding a Norton which gave no more than 45hp but, housed in the legendary “Featherbed” frame, had the best handling in the world.

What they lacked was power and acceleration. The legendary four cylinder Gileras had 25 more horsepower than the Norton and only weighed 18kgs (40lbs) more. When Duke sorted out the Gilera’s handling, having been poached by the Italians from Norton, the British singles were effectively finished as a force in Grand Prix racing.

Judged objectively, the 1950s is probably the greatest period in the whole history of motorcycle racing. There were works teams from a dozen manufacturers and the bikes ranged from single cylinder machines all the way to the fabulous eight cylinder Moto Guzzi – and everything in between.

This golden period ended in 1957 when motorcycling’s governing body brought a halt to ever more complex machines by limiting all classes but the 350 and 500 and to twin cylinders and six gears. The result was a mass withdrawal of manufacturers and a World Championship which was dominated by MV Agusta and the incredible Giacomo Agostini. 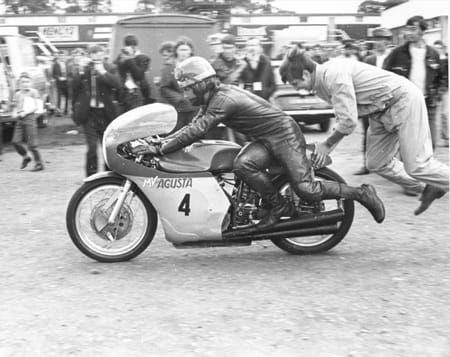 A by-product of the hiatus was that British GP singles became competitive once more and in 1962 and 1963 Cumbrian Alan Shepherd took his Matchless G.50 to the runner up position in two 500cc World Championships.

The new regulations suited two-strokes very well and there was a flurry of two-stroke successes not only in the smaller classes, where Yamaha dominated, but with bigger machines from Suzuki and Kawasaki.

In 1971, Australian Jack Findlay actually won the Ulster GP with his Jada special – arguably the only time when a road bike engined machine has won a GP.

If the 500 class was becoming the haunt of unsophisticated, home tuned specials the East German MZ company was pushing the boundaries of two-stroke engineering ever further with their disc valved two-strokes. It was this technology which Suzuki used first for their four cylinder, “square four” 250 – known, not too fondly by the riders, as “Whispering Death” – and then, later, the RG500 which carried Barry Sheene to his pair of World Championships in 1976 and 1977. 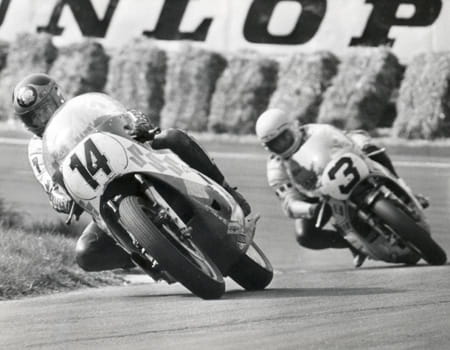 Not that Suzuki were the only manufacturer in the game. Yamaha, having had a monopoly of the smaller classes, brought American superstar Kenny Roberts over to Europe and the brash, aggressive and ultra-confident Californian took three 500cc Championships in 1978, 1979, and 1980 riding the across the frame “4s” from Yamaha.

Now, instead of the 48hp of the works Norton, or the Gilera’s 70hp, the Yamahas churned out a tyre shredding 105hp.

With the new power came a new riding style. Gone was the neat, smooth, high corner speed of the classic era and instead ex-dirt tracker Roberts backed the bike into corners with the rear wheel hanging out and the front end in the air.

The Yamaha’s 105hp was soon to look very tame indeed as two-stroke designers found apparently limitless power from screaming four cylinder bikes which, except for a brief experiment with a three cylinder machine by Honda, all became V4s. In 1983 Yamaha now had a delta box alloy frame and 120hp from their OW70 whilst Honda were weighing in with their own V4 whacking out over 140hp.

This was a period now called the “Unrideables”. There was mind blowing power available but the chassis and tyres were a generation behind – and MotoGP electronic aids for the rider unknown.

So Wayne Rainey, Eddie Lawson, Kevin Schwantz, Wayne Gardner, Randy Mamola and our own Ron Haslam slid, wheelied and crashed their way into the history books – and into every barrier the track had – until the final bow for two-strokes before the era of MotoGP.

The two-strokes faced dual problems. First, even for the Moto Gods who were riding them, the bikes were becoming unmanageable. Mick Doohan broke almost every bone in his body winning five World Championships from 1994 to 1998 on his 180hp, 131 kg (288lb) Honda NSR missile. 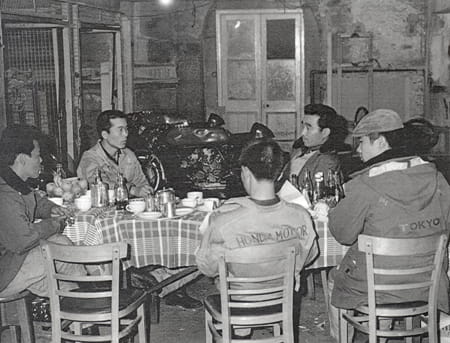 The final years of the 500cc class were a fitting tribute to five decades of epic GP racing. Valentino Rossi, the racer who truly believed that for him walking on water was a mere post-race celebration trick, took the now 200hp NSR and treated it as a plaything: but Rossi is a very special talent.

The other problem was that few people used two-strokes on the road at the start of the new millennium and the GP show on the track was looking increasingly outdated and irrelevant. To aficionados, screaming two-strokes ridden by fearless warriors were still the apogee of racing but for the ordinary man or woman in the street, who rode a four cylinder Japanese four stroke, they were an anachronism. They wanted machines which had some link, no matter how tenuous, to what they rode. They wanted MotoGP bikes.