Zen and the art of motorcycle momentum 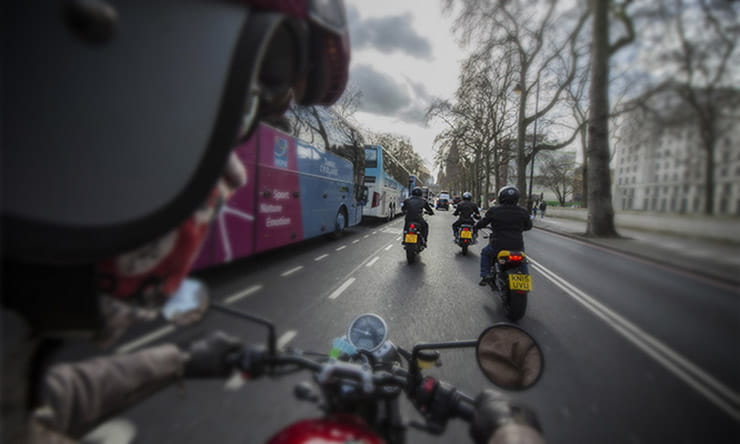 I read an article at the weekend about the footballer David Silva, praising not only his obvious skill with a ball, but also his seemingly 360-degree vision and ability to understand his and his opponents and teams mates’ positions in the space around him to read a situation and respond to it ahead of the others.

The article was about how top sportsmen had come to understand the value of such awareness and how this, combined with their automatic, subconscious physical skills honed through thousands of hours’ practice was what split the elite from the rest. Top coaches in many different sports are now using special training techniques to develop this unconscious awareness for enhanced performance.

I’m thinking of this sitting in a car, in traffic between Croydon and Brixton as yet another scooter whizzes past. It’s taken us (family outing...with dogs, hence the car) forty minutes do cover the last 1.1 miles of the A23. Most of the scooters are ridden carefully, but not that fast. They are probably averaging 15-20mph (that’s ten times faster than I am). At least half, maybe more are food delivery riders, almost all are sporting L-plates. The standard of riding is surprisingly good, given the relative lack of experience. If I weren’t so late, I’d sit back and enjoy the poetic motion of it all. By comparison, the swarms of cyclists look clumsy, lost and accidents waiting to happen.

There’s something about riding in traffic that still excites me. As part of probably the last generation outside London who grew up riding bikes as cheap transport, I still see motorcycling as utility first-and-foremost. Still value a centrestand and good mpg figures more highly than how much horsepower or electronic aids a bike has too. And I’m the only person I know who gets excited about riding round the M25.

I can see a huge similarity between what’s going on ahead of my snarled-up tin-top and that description of top-flight sportsmen above. Riding through traffic is all about managing time and space. The road you are occupying now was scanned, assessed and disregarded a few seconds before you got close. Up ahead you already have an evolving three-dimensional picture of the traffic flow, oncoming hazards, junctions, traffic light status and how the gaps are likely to open and close, long before you get there.

This is the stuff they can’t teach you on a course. It comes with mile after mile of riding. This is the reason why we feel shattered after a long ride, sitting upright, apparently exercising no muscles whatsoever. The subconscious brain power required to calculate all this stuff is immense, never mind the nervous energy as your body is on the edge of fight-or-flight for longer than it was designed for.

You, Darren of Godalming, Surrey’s eighteenth-least experienced Deliveroo rider are the Marc Marquez of the South Circular. And I can spot you in Tesco or walking down a busy high street. Seriously, next time you’re on foot in a busy shopping centre, watch out for the riders. They are looking further ahead, avoiding those clumsy ‘sorry…sorry’ encounters and somehow gliding through the chaos like a handful of swans in a canal full of squabbling seagulls.

Motorcycling is unique for this. How many other skills do humans develop that allow us to do this? Car drivers never get beyond the queuing stage, cyclists don’t have the speed or agility to need these skills and, while footballers, rugby players and fighter pilots can do it in isolation, none have the unpredictability of the A23 in rush hour to deal with. Last year I watched a documentary about the criminal gangs of scooter riders terrorizing London. Part of which was a misguided-but-interesting experiment to see if these kids had anything positive to offer society. They took a convicted scooter-scumbag to a Formula 1 race simulator to measure his responses and reflexes and, it turned out he scored much, much higher than you’d expect someone to do on their first go. I must have been the only viewer not surprised by this.

I’m sure this is why riders arrive at places in a calm, almost trance-like state. Our subconscious mind is working so dramatically to process this information that the conscious bit has very little to do. I don’t really do track days anymore, but I remember in the last summer that I did, spending an awful lot of the time feeling like I was wafting along at 100+mph thinking, ‘Oh, look a chaffinch,’ when everyone else was raging on testosterone.

Sadly, it appears to be a skill that has absolutely no other practical application other than navigating your local shopping centre without colliding. Being the king of the A406 doesn’t mean you can multi-task, stay calm under other pressures or be any less angry when the printer breaks (again). David Silva has made a lot more money from not being as talented at three-dimensional geometry as you, me or any of those Deliveroo riders. The only satisfaction we can have is that he gets stuck in traffic on the way home from the match where we get an extra ten minutes of cuddles and our chips will still be warm.

What it does mean is that we should be proud of being better riders. And that advanced motorcycling is about much, much more than how fast you can ride around a corner. If you’re at the start of your riding or coming into it simply because you have a calling to deliver pizza, then make it your ambition to be even more revered and admired than Darren of Godalming. Riding a bike in traffic is difficult and takes time to master. Being good at it not only gets you home quicker, but you might just become the unspoken secret hero of every gridlocked driver on every clogged-up A-road.

Enjoy the adulation, you’ve earned it.